The Czech Republic expels 18 Russian diplomats over suspicions of the involvement of Russian special services in an explosion at an ammunition depot in 2014. The Czech police said they were looking for Russians Alexander Petrov and Ruslan Boshirov in connection with the investigation of "circumstances related to serious criminal offenses." Russia responded by expelling 20 Czech diplomats from the country, writes Air force. 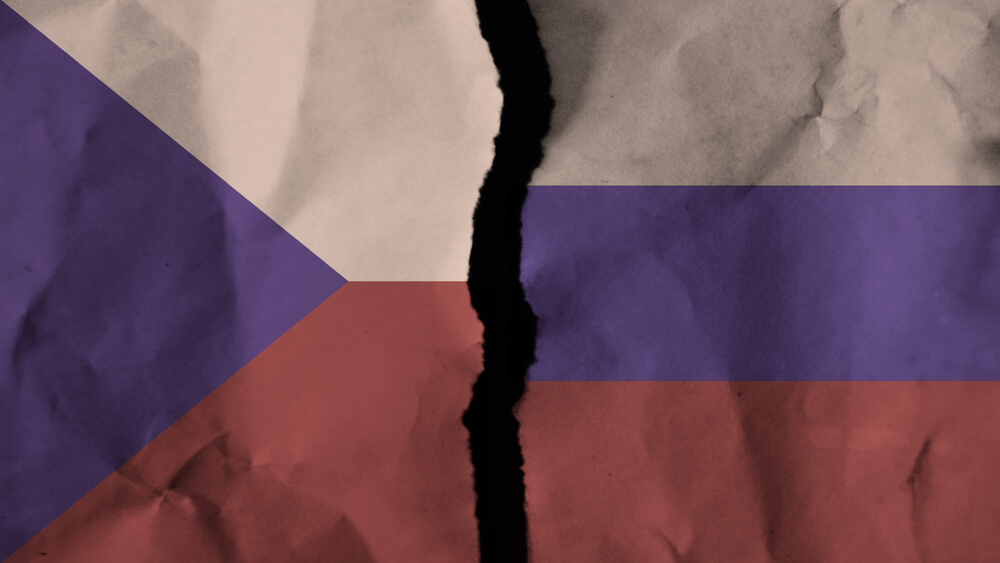 Why are diplomats expelled

Hamachek decided to expel those diplomats suspected of working for two Russian special services - the GRU and the SVR. They were “clearly identified by our secret services,” the minister said.

According to Prime Minister Babis, there are reasonable suspicions that the agents of these special services were involved in the explosion of an ammunition depot in the village of Vrbetice near the town of Zlín, which took place in 2014 and killed two people, Radio Prague reports.

Diplomats are required to leave the Czech Republic within 48 hours. Hamacek admitted that their expulsion would seriously undermine Prague's relations with Moscow.

“But we have to react,” he said. “We are in the same situation as the UK in the attempt to poison [the Skripals] in Salisbury in 2018,” the minister said (quoted by TASS).

On March 4, 2018, in the city of Salisbury, Great Britain, a former GRU officer Sergei Skripal and his daughter were attacked using the Novichok nerve agent. The British prosecutor's office accused Ruslan Boshirov and Alexander Petrov of the attack in absentia, specifying that they consider these names to be fictitious.

The Czech police on Saturday, April 17, issued a separate statement that two men with Russian passports issued in the name of Ruslan Boshirov and Alexander Petrov were put on the wanted list.

On Twitter, the police posted a photo of the same men who were shown in 2018 by the British police as suspects in the Skripal poisoning and who gave an interview to Margarita Simonyan from RT channel, explaining that they went to Salisbury to admire the sights.

The police are asking for help in the search “in connection with the investigation of circumstances related to serious criminal offenses,” without specifying which ones.

Hamacek said on Czech television that the Czech Republic would ask Russia to assist in the investigation and would try to interrogate the wanted persons. The Minister, however, does not expect that this step will lead to success, since the Russian Federation does not extradite its citizens for persecution to foreign states, Radio Prague reports.

The police statement said nothing about an ammunition depot in the eastern village of Vrbetice. The explosions in the warehouse occurred on October 16 and then December 3, 2014.

Warehouses # 16 and # 12 were destroyed, two people from among the personnel were killed. The Military Technical Institute rented out warehouses to firms that were licensed to trade in military materials. Both warehouses were leased by the Imex Group from the city of Ostrava, Radio Praha notes.

The DPA reports that they contained anti-personnel mines.

In the fall of 2018, the Bellingcat project and The Insider published an investigation, according to which the real name of Boshirov is Anatoly Chepiga, and Petrov is Alexander Mishkin. The investigators called them GRU officers. The BBC's Russian service was then able to confirm Bellingcat's information by examining several Russian databases obtained from anonymous sources. Moscow has denied any involvement in the Salisbury attack.

On the subject: The White House froze the property of the Russian authorities in the United States: what else is in the new sanctions

The Russian Foreign Ministry expressed a strong protest in connection with the "hostile step" of Prague and announced the return expulsion from the country of 20 Czech diplomats.

“The Czech authorities made an unprecedented decision to expel 18 employees of the Russian embassy under unfounded and far-fetched pretexts about the involvement of Russian special services in the 2014 explosion at military depots in the village of Vrbetice. This is all the more absurd, since earlier the Czech leadership blamed the explosions on the firms that own these warehouses, ”the ministry said in a statement released on Sunday, April 18.

“This hostile step was a continuation of a series of anti-Russian actions taken by the Czech Republic in recent years,” the Russian Foreign Ministry said.

“One cannot fail to see the American trail as well. In an effort to please the United States against the background of recent US sanctions against Russia, the Czech authorities have even surpassed their overseas masters in this respect, ”the statement says.

The Ambassador of the Czech Republic Vitezslav Pivonka was summoned to the Russian Foreign Ministry, who was informed that 20 employees of the Czech Embassy in Moscow were declared persona non grata.

"They have been ordered to leave the territory of our country before the end of the day on April 19, 2021," the Russian Foreign Ministry said in a statement.

Prime Minister Babis said that he had informed President Milos Zeman of the findings of the Czech special services, and he fully supported the actions of the Czech Foreign Ministry. According to him, consultations are also underway with partners in the EU and NATO.

The conflict could influence the decision on whether Russia will be invited to participate in the tender for the construction of a new power unit at the Dukovany nuclear power plant, Industry Minister Karel Havlicek told Reuters. One of the contenders for the completion of the construction is Rosatom, the Czech special services are opposed.

Back on Friday, April 16, it became known that Foreign Minister Hamacek canceled a planned trip to Moscow, during which he was supposed to negotiate the purchase of the Sputnik V coronavirus vaccine. For these plans he was criticized by both the opposition and the coalition partners, writes Deutsche Welle.

The US Embassy in the Czech Republic announced its support for the decision of its ally to hold Russia accountable for dangerous actions on Czech soil.

“The United States stands with its steadfast Ally, the Czech Republic. We appreciate their significant action to impose costs on Russia for its dangerous actions on Czech soil. ” - CdA Jennifer Bachus https://t.co/Qx71P3T08r

Reuters describes the expulsion of 18 Russian diplomats as the biggest scandal between Russia and the Czech Republic, a NATO and EU member, since the end of the communist era in the country's history in 1989.

In April last year, relations between the Czech Republic and Russia deteriorated due to the "ricin scandal". It began with a report from the Czech publication Respekt that the police had taken under guard the mayor of Prague Zdenek Grzyb and the head of the Prague-6 administrative district, Ondjej Kolář.

Citing its sources, the publication wrote that a Russian had allegedly arrived in the Czech Republic with a diplomatic passport, intending to poison these politicians with ricin poison. Kolarz, as the head of the district, was responsible for dismantling the monument to Marshal Ivan Konev in Prague, and Grzyb - for renaming the square in front of the Russian embassy in honor of Boris Nemtsov.

In June, the Czech Republic declared persona non grata and obliged two employees of the Russian embassy to leave the country. The Czech secret services came to the conclusion that there was an “internal struggle” between them, as a result of which one of the diplomatic mission officers gave false information about the planned attack on local politicians. Czech Radio reported that the deportation was linked to a “ricin scandal”.

“This caused complications in Czech-Russian relations and damaged the good name of the Russian Federation,” Prime Minister Babis said at the time. The Russian Embassy, ​​in turn, announced a “fabricated provocation” and an “unfriendly step” based on unsubstantiated accusations in the media.