Home culture 'What disgusting, this is your jellied fish': funny stories about real feasts in Soviet cinema

'What disgusting, this is your jellied fish': funny stories about real feasts in Soviet cinema

According to film critics, the main difference between Soviet cinema and modern Russian cinema is that earlier, real food and drinks were used in table scenes, and today, in order to save money, most of them put plastic fruits, fake meat and cola instead of beer on the table in the frame, notes "Lada”On the example of popular films. 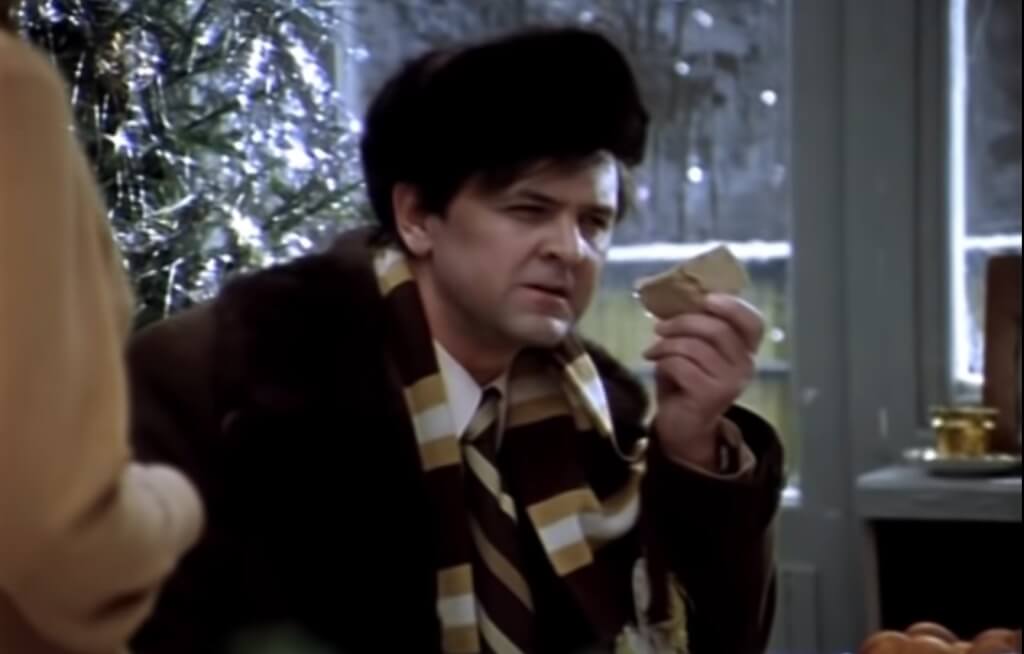 To lay the royal table for real was a matter of honor for Gaidai: Leonid Iovich decided that it was impossible to allow fake. But then it turned out that the film's budget simply could not handle such a financial burden.

And yet Gaidai did not abandon his plan - he bravely took all the costs for himself. "The kidneys of hare twisted, pike heads with garlic, black caviar, red caviar, overseas eggplant caviar", as well as baked piglets and other delights cost the director 200 rubles. At least that's what the legend says.

According to the same legend, delicious dishes were doused with kerosene so that they would not be eaten ahead of time. And yet there were daredevils who did not disdain the smell and taste: once, having come to the pavilion, the props found only the remnants of the feast, someone dared to "taste" these delights!

On the subject: How much does it cost to go to the cinema in the USA, and why Russians consider it a luxury

Since this is happening in the Caucasus, the whole film the heroes now and then find themselves at a generously set table, gluttony.

Shurik, unable to refuse new friends, revels in chacha. In the restaurant, at a beautifully laid table, the fate of Nina is decided and a terrible curse sounds: “Bambarbia! Kergudo! " The kidnapped potential bride is fed with selected fruits and other food. And in three minutes, while Nikulin sings “If I were a Sultan,” the fragile “Komsomol member, activist and just beauty” manages to deal with a huge tray filled with all kinds of yummy.

But the most interesting story happened when they were filming the beer episode. Remember how the trinity - Coward, Goonies and Experienced - drink draft beer? Nikulin and Morgunov had nothing against the real (as Gaidai insisted) intoxicated drink. Take after take, the actors happily devoured a glass of foam.

And only Vitsin flatly refused: he was a convinced teetotaler and a vegetarian, was fond of yoga and did not tolerate alcohol. A rosehip broth of a similar color was poured into his mug.

But at some point they noticed: there is no foam! Unconvincing! And poor Georgy Vitsin had to drink real beer in the frame. For the sake of credibility, the actor stepped over his beliefs and then felt bad for several days. 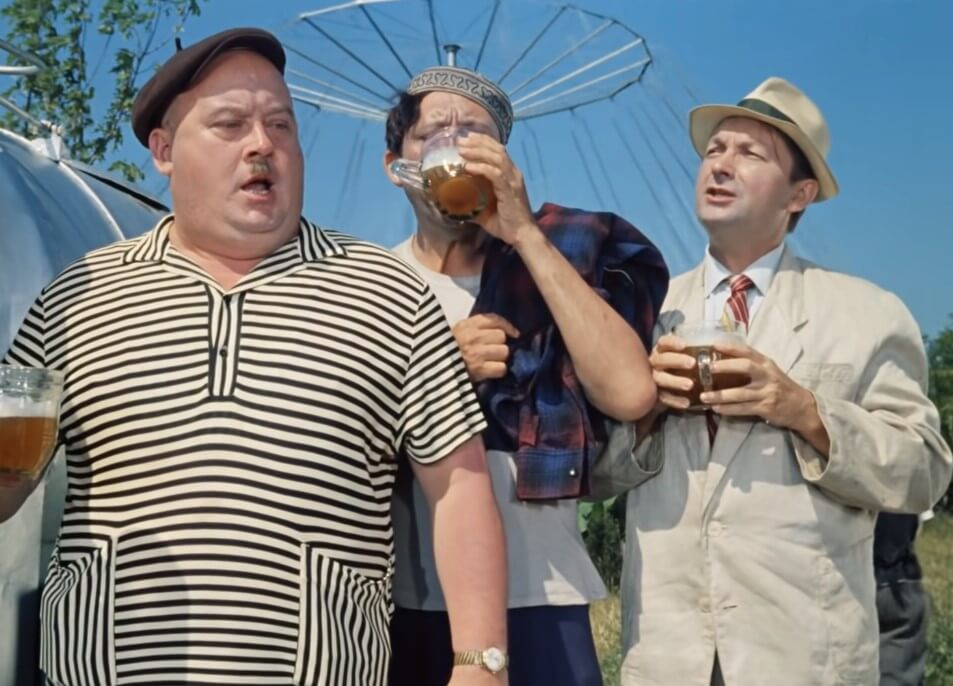 If you think that in this picture Vereshchagin is eating with spoons not real caviar, but some kind of substitute, then you are deeply mistaken. Moreover, you are wrong if you assume that Pavel Luspekaev in the role of Vereshchagin only skillfully portrays disgust at that moment!

The caviar was real, and in a few takes Luspekaev had to consume almost a kilogram of an immensely valuable product. So, the film contains exactly those shots when the actor looks at the delicacy with sincere hatred and says: "This damned caviar again!"

By the way, the remnants of luxury quickly deteriorated due to the heat, so they had to be thrown away. Although there is another, more believable version: as soon as the director uttered the desired “shot” by everyone, those present on the set pounced on the caviar and began to absorb the delicacy with their hands (due to the lack of spoons). And as it really was - it is unlikely to happen to find out. 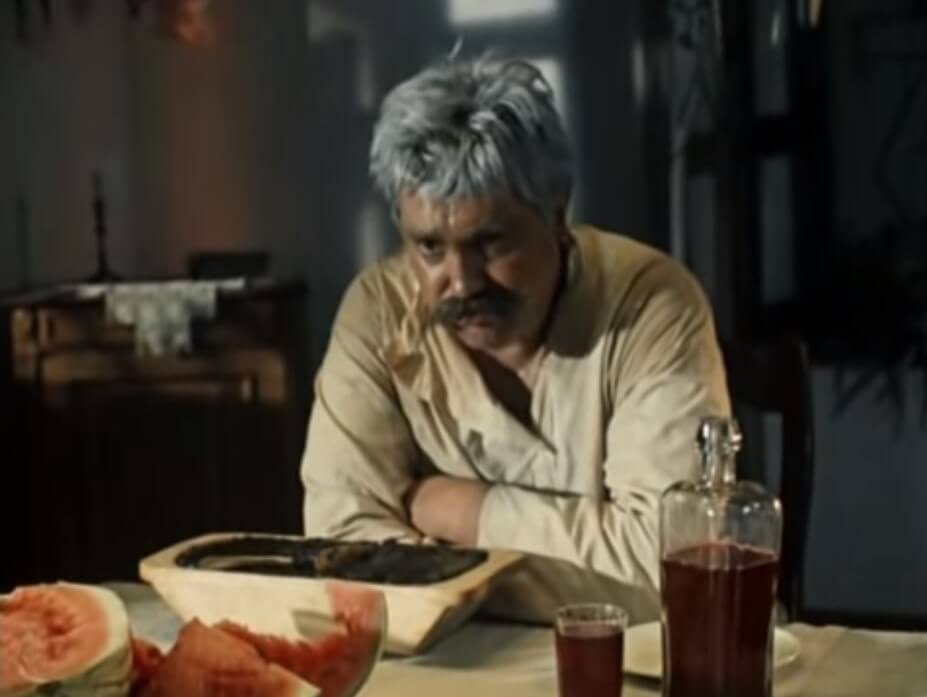 In one of his interviews, Sergei Yursky said that during the filming of the scene where his hero, Uncle Mitya, knocks over glass after glass, he did not drink water, as it might seem, but real vodka. And he and Vasily drank real beer, otherwise where does such lush foam in mugs come from?

Moreover, even on a date with Nadyukha, Vasily takes out a check with real vodka from his bosom and drinks it for real, and then lets out a drunken tear sincerely.

The actress ate 15 pieces of pie - "The Marriage of Balzaminov"

Lydia Smirnova, who played the role of a matchmaker in this film, sits down at the table and is treated to a pie with jam. For the first time, the actress ate a piece of dessert with pleasure. The second time, she also defeated him without any problems. But the take was replaced by a take, and the director didn't like everything.

As a result, Smirnova had to eat as many as fifteen pieces of dessert! She was already sick of the very sight of the pie, the pastries were disgusting and vomiting, but which cannot be done for the sake of art. 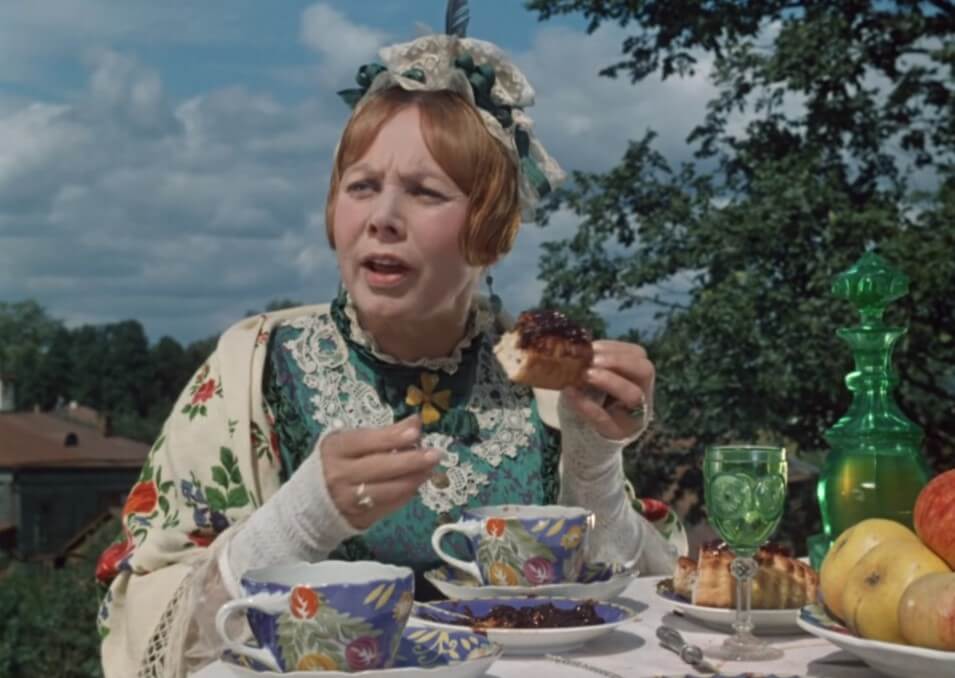 Ryazanov refused to film drunken actors - "Irony of Fate, or Enjoy Your Bath!"

The bath scene was filmed in a cold pavilion. The naked actors, wrapped in sheets, were freezing. And then it turned out that Alexander Belyavsky has a birthday! In general, as Shirvindt said, instead of prepared fake bottles of vodka, the artists opened the real ones, which secretly from Ryazanov had replaced the props in advance.

The director, however, very soon discovered a forgery and, scolding the actors, forced them to reshoot the next day, already sober. But when editing the picture, they still preferred the first version - "drunk".

Yakovlev almost poisoned himself with jellied fish - "The irony of fate, or Enjoy your steam!"

Everyone remembers with what melancholy drunken Ippolit performed by Yuri Yakovlev utters the famous phrase: "What disgusting, this jellied fish of yours!" But - continues to chew courageously ... In this episode, the actor really had a chance to show courage. As Valentina Talyzina said, there was nowhere to store the prepared jellied fish because of the lack of a refrigerator. They covered the dish with fish with something and left it on the table, where it stood for more than two days.

Of course, it was already impossible to use it. But Yakovlev still ate through strength: the selfless professional understood that he was being filmed on a scarce Kodak film, and everything had to be done from the first take. But the phrase about “muck”, which was not in the script, said from the heart.

What surprised the immigrant with the service in American cafes

Lived and returned: how the pandemic prevented immigrants from Russia from settling in the USA