Home culture Trump's lawyer, without knowing it, starred in a film about Kazakhs

Rudy Giuliani's reputation may be hit again after the release of some very awkward footage in the sequel to Sasha Baron Cohen's Borat-2. The Guardian. 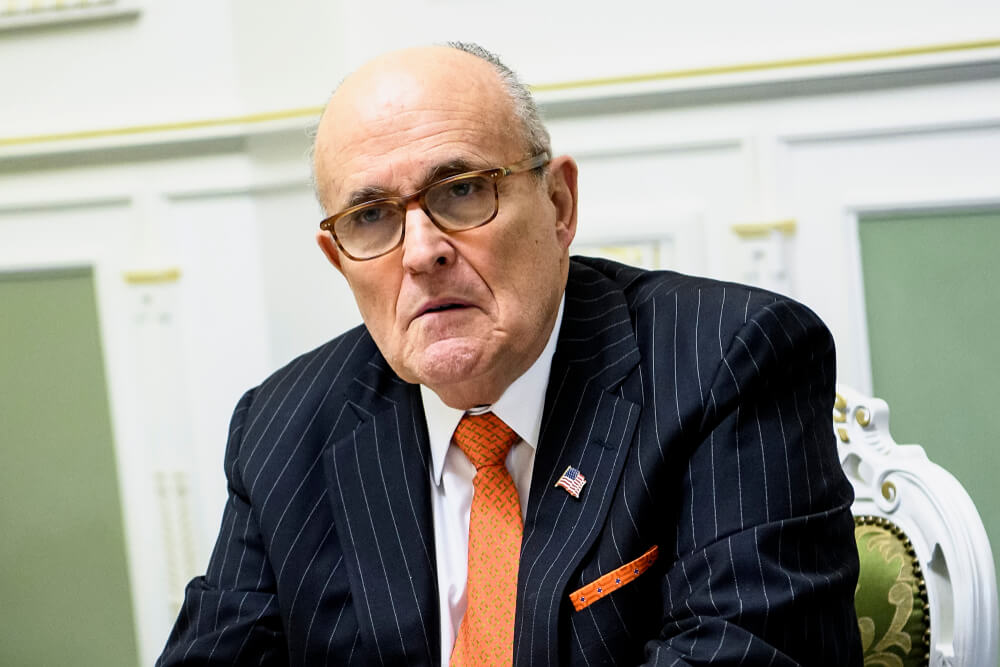 The film, released on Friday, October 23rd, shows the former New York mayor and current personal lawyer of Donald Trump getting into his pants. Lying on the bed, he appears to be touching his genitals in the presence of the actress playing Borat's daughter, posing as a TV reporter.

After an obsequious interview for a fake conservative news program, the girl and Giuliani, at her suggestion, go to their hotel room for a drink. The room is equipped with hidden cameras.

After she removes the microphone, the 76-year-old Giuliani is seen lying on the bed, touching his unbuttoned shirt and slipping into his pants. Then they are interrupted by Borat, who runs in and says, "She's 15. She's too old for you."

Rumors of the incident first surfaced on July 7, when Giuliani called New York City police to report the intrusion of an oddly dressed man.

“This guy comes running in, dressed in a crazy, I would say, pink transgender suit,” Giuliani told the New York Post. - It was a pink bikini with lace under a translucent mesh top, it looked absurd. He had a beard, bare legs, and I wouldn't call him attractive. This man screamed and screamed. I thought it must be fraud or extortion, so I reported it to the police. Then he ran away. "

The police found no corpus delicti.

Giuliani continued: “It was only later that I realized that it was probably Sacha Baron Cohen. Then I thought about all the people he had deceived earlier, and I felt good because he did not understand me. "

It will not be easy to convince viewers that Sasha Baron Cohen, who reprized his role as clumsy reporter Borat Sagdiev, and Maria Bakalova, who plays his daughter Tutar, did not succeed.

On the subject: Giuliani, Ukraine, and Joe Biden: US Trump Attorney Investigated

According to the plot of the film, the government of Kazakhstan sends Borat to the United States to bribe Donald Trump's ally and ingratiate his country with the administration. When the monkey intended for the gift got sick, Borat's supposedly underage daughter became a gift in return.

Even before he reached into his pants, Giuliani didn't seem to be particularly impressive during the meeting. Flattered and flirtatious, he drinks whiskey, coughs, doesn't distance himself from others, and claims Trump's immediate action saved a million Americans from death due to COVID this spring. He also agrees (in theory at least) to communicate more closely with his interviewer.

Giuliani became a key figure in the later stages of the US presidential election after he obtained a laptop hard drive allegedly belonging to Hunter Biden and left it in a repair shop in Delaware.

His attempts to unearth political filth on Trump's White House rival means that the film's humiliating footage can be seen as an attempt to undermine Giuliani's credibility. The movie, released on Amazon Prime less than two weeks before the election, ends with a voting instruction.

Unfortunately, the circumstances of the set-up seem to be consistent, and Giuliani suggested that he could be easily bewitched. Bakalova, 24, is very believable in this ploy, despite the fact that she also has to pretend to be a wild teenager posing as a far-right journalist for the convenience of viewers.

In a radio interview, as soon as news of the film emerged, Giuliani stated that he was only trying to remove the microphone and tuck in his shirt.

He added that he considered the interview with Bakalova completely legal.

“At some point, she explained to me some of the problems she had,” he said. - And then I had to leave. I was wearing a jacket. I was always fully clothed. "

Later on Twitter, Giuliani made fun of the film - he called it "completely fabricated."

“Never before, during or after the interview did I behave inappropriately. If Sacha Baron Cohen means otherwise, then he is a cold-blooded liar, ”he added.

As with the first film, which grossed $ 262 million in 2006 and won a Golden Globe for Baron Cohen, the most disturbing scenes are those that reveal deeply rooted prejudices among the American people.

Baron Cohen's real views against online platforms that he believes promote anti-Semitism are reflected in a film in which Borat learns via Facebook that the Holocaust "was just a fairy tale."

His mind changes after speaking with two elderly Jewish women, one of whom, Judith Dim Evans, died after filming at the age of 88. Her family filed a lawsuit against the filmmakers, claiming that she was "frightened and upset" to learn that "the film was in fact a comedy aimed at making fun of the Holocaust and Jewish culture."

However, Deadline suggests that the filmmakers informed Dim Evans of the film's true goals after her scenes were filmed, and that there is still footage of it. They also hope her family can reconsider their decision after watching the movie, which ends with a tribute to Dim Evans and a link to a website created in her honor.

The criminals of the year: our people arrested in the US in 2019