Home In the U.S. Shooting at a school in Florida: details of the tragedy. A PHOTO. VIDEO

Shooting at a school in Florida: details of the tragedy. A PHOTO. VIDEO

Shooting occurred in a high school in Parkland, Florida, which resulted in at least 17 people being killed and several injured. The shooter was a former student of the school. Shooting is called one of the most widespread murders in modern US history.

Before the end of the lessons, around 14: 40 local time, the attacker triggered a fire alarm, which caused panic at school, and then opened fire on the people running, wrote with the BBC.

According to the sheriff, the shooter had an automatic rifle and "countless magazines."

He started shooting at people on the street, killing three people. Then he entered the school building, where he shot another 12 man. Two more died from their wounds in the hospital. 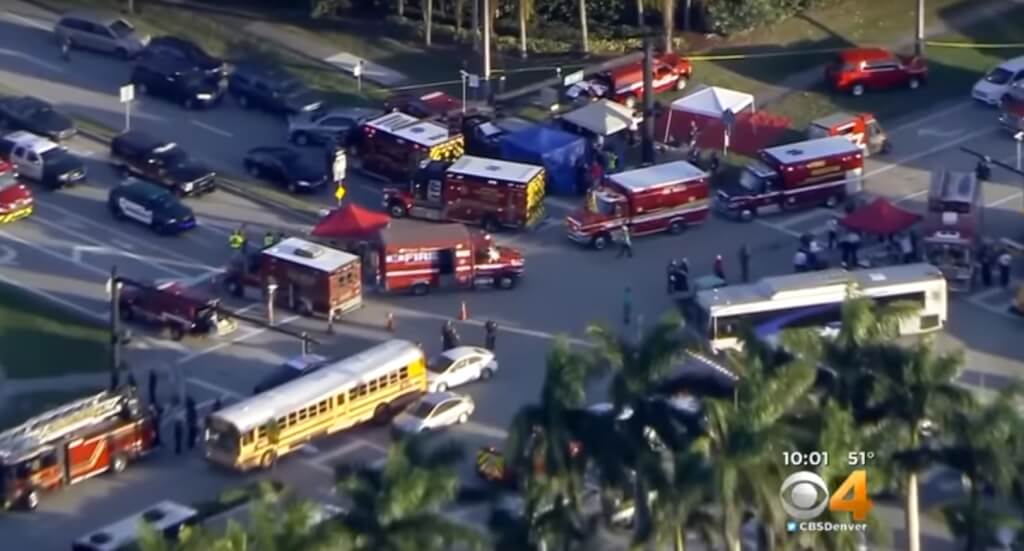 The latest figures on the death toll were provided by the local sheriff's office. “I regret to report that 17 people died,” Sheriff Scott Israel wrote in Twitter.

According to the sheriff, among the dead there are both students of the school and adults, but it is not yet known whether this is the parents or the teacher.

Not all of those killed are identified. Among the victims, at least two teachers, including a football coach, who tried to close the students. 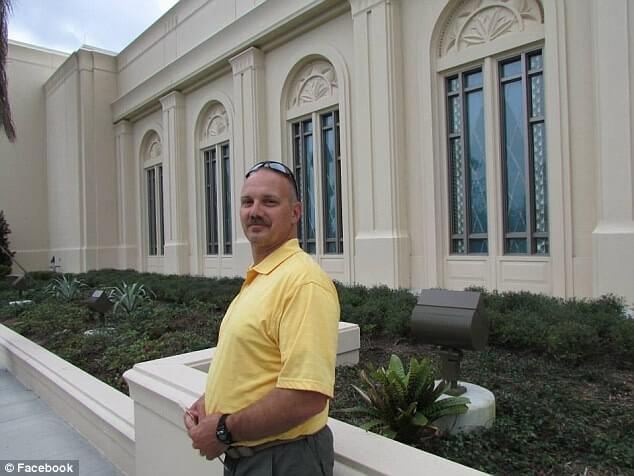 Residents of nearby houses were asked not to go out. The footage from the scene was visible helicopter flying over the school.

During the operation, the police asked teachers and students to “stay barricaded until the police came to you”. 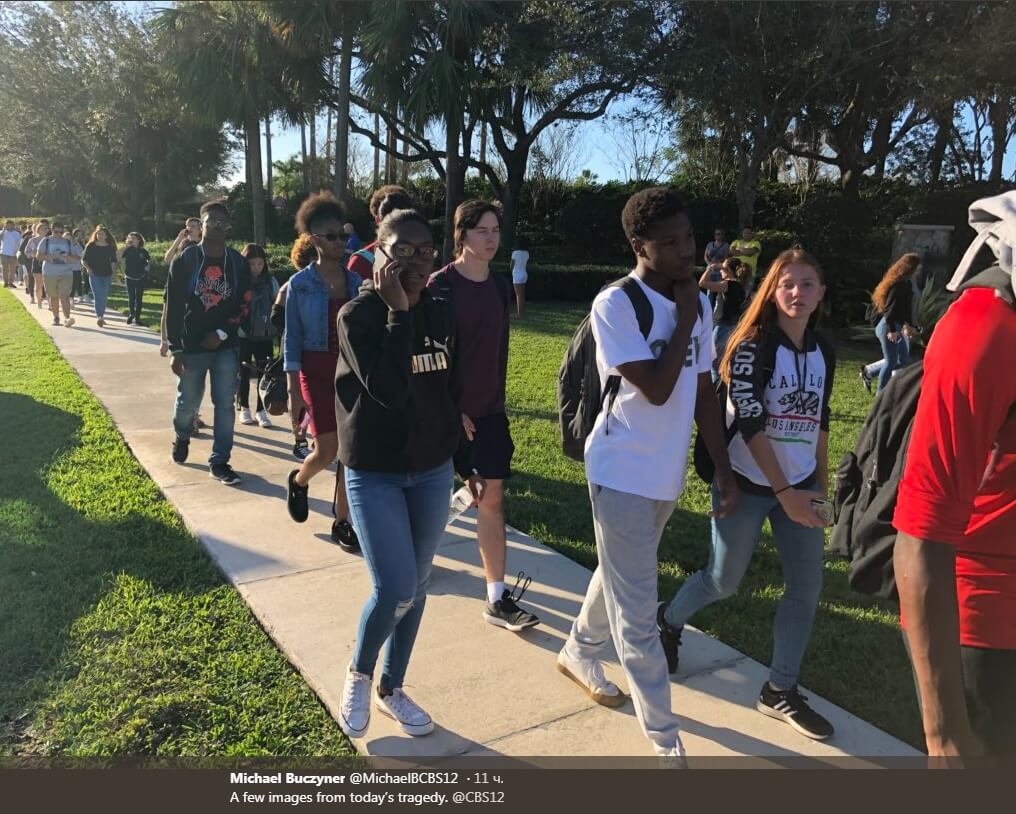 The FBI said it was "taking the necessary measures."

What is known about the shooter 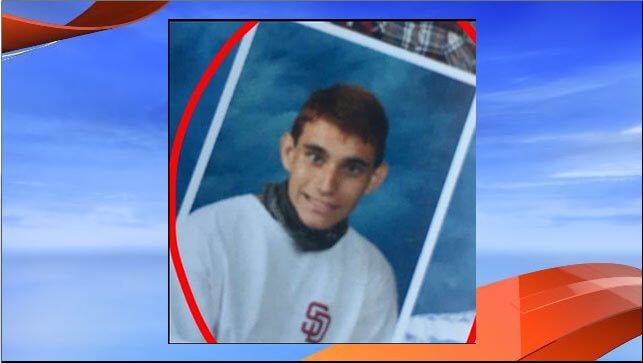 US media right away сообщилиthat the attacker is 19-year-old former high school student Nicholas Cruz. Later, his identity was confirmed at the sheriff's office, adding that Cruz was arrested.

A total of 17 people were transported to hospitals, two of them died, three are still in critical condition.

The attacker was also first taken to the hospital, where physicians assisted him before transferring him back to the special services that had placed Cruz under arrest.

USA Today reports that the shooter was known to the police because he “was a participant in the federal training program for young reservists” (Junior Reserve Officers' Training Corps - JROTC). Cruise was expelled from the school for “violation of discipline”.

It is known that in November 2017, Cruz’s adoptive mother died and he was left without parental care. The police often visited the house of Cruz because of complaints from neighbors. He shot at their chickens. Relatives shooter told the local edition Sun Sentinel that the shooter was diagnosed with autism. 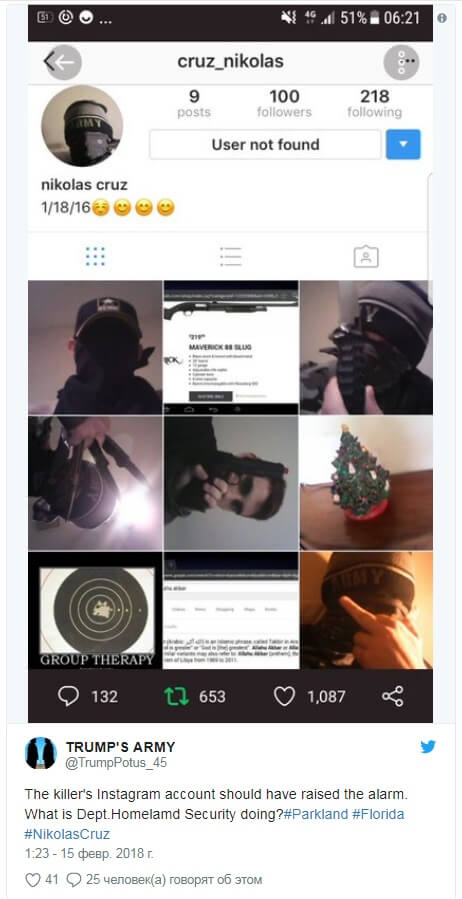 “We've already started scouring his websites and what he wrote on social media,” Israel assured, calling some of Cruise's posts “very, very disturbing.”

According to sources, the assailant used an AR-15 rifle and a pistol. AR-15 was previously used in mass shootings in Newtown, Aurora and San Bernardino. Now the attacker is in the Broward County jail, before that his mental and physical condition was assessed in the hospital Broward General North.

One of the students, Kayden Hanafi, said that he heard two shots and saw people in a panic start running out of the building. Many of his classmates did not immediately understand what had happened, and decided that the sounds could be fireworks.

Nicole Baltzer, 18 years, said she was in a trigonometry class when the fire alarm went off. When the students were evacuated, she heard six shots, and everyone started to run back to school.

“I heard at least 6 shots. They were very close, ”Baltzer said.

According to one of the students, at the beginning of the day, there was a fire safety training at school, with the result that some people first thought that a message about shooting and a request to hide was another training exercise.

“But then it became known that these were real shots, and not something else,” he said. 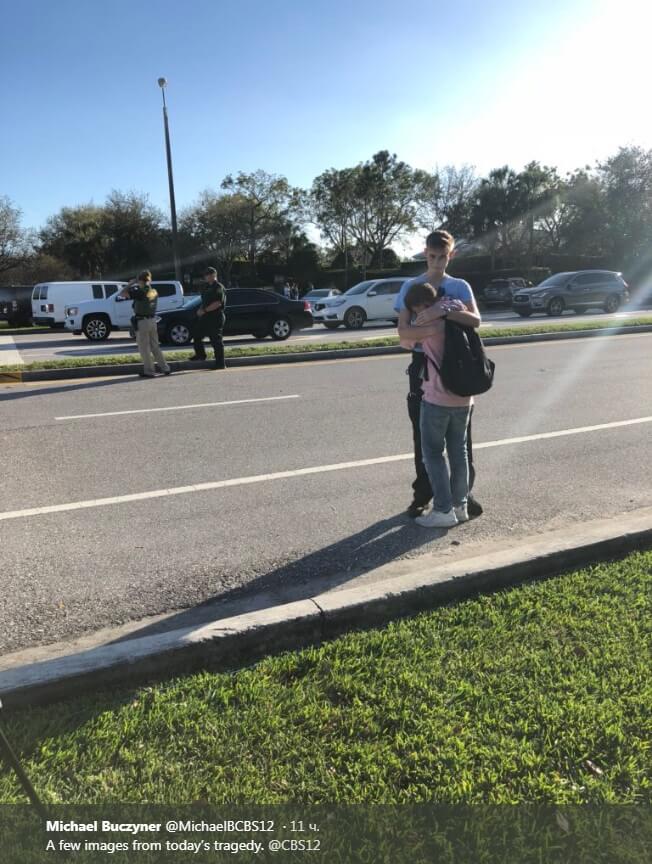 School teacher Melissa Falkowski said that the students were trained in the event of shooting incidents at school, the TV channel writes “Rain“. “We did everything we could. The school prepared us for this situation, and there are still a lot of victims. I take it very close to my heart, because I feel that our government, our country has failed and did not protect us and our children, ”said Falkowski.

The US Senator from Connecticut, Chris Murphy, commented on the situation. During a Senate meeting, he said: “As we speak, terrible things are happening at a high school in southern Florida. Turn on the TV and you will see children trying to escape. "

The governor of the State of Florida, Richard Scott, immediately after the news of the shooting, contacted the US President, the country's special services and the school administration.

President Trump in Twitter expressed condolences to the victims and families of the victims. "No child, teacher or anyone else should feel in danger in an American school," Donald Trump wrote.

Shooting in Florida has become the bloodiest in the number of casualties since 2012. Then, an attack on a school in Sandy Hook killed 26 people.

Since the beginning of 2018, six shots have occurred in the United States, in which students were killed or injured.

How to escape from a lone terrorist: a school of survival