Home In the U.S. It became known that it was in ads bought by Russian trolls on Facebook

The Russian company, which is accused of interfering in the presidential election of 2016 of the year, overwhelmingly focused on racial topics in social networks. 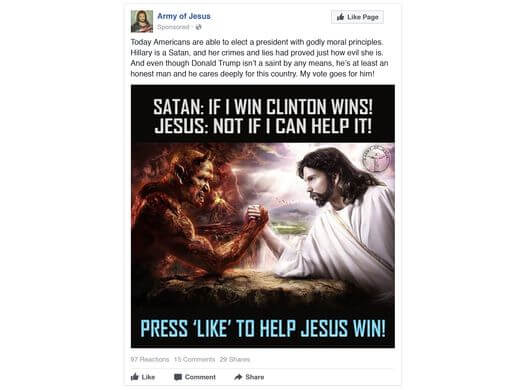 Approximately 3500 ads on Facebook were created by the Russian Internet Research Agency. In February, Robert Muller accused 13 of Russians and 3 companies in an attempt to influence US elections.

While some ads focused on commonplace things, such as business promotion or Pokémon, others did advertisements designed to create tension during a pre-election race. Some related to issues of race and religion, some also focused on protesting against police activities, debates about the wall on the border of the United States and Mexico, and relations with the Muslim community.

The company continued to develop racial themes even after the elections.

USA TODAY NETWORK reporters reviewed each of the 3517 ads that were made public this week for the first time in the Chamber of Permanent Selection on Intelligence. The analysis included not only the content of the ads, but also information that showed the target audience when the advertisement was published, the approximate number of views and the cost of advertising for publication. 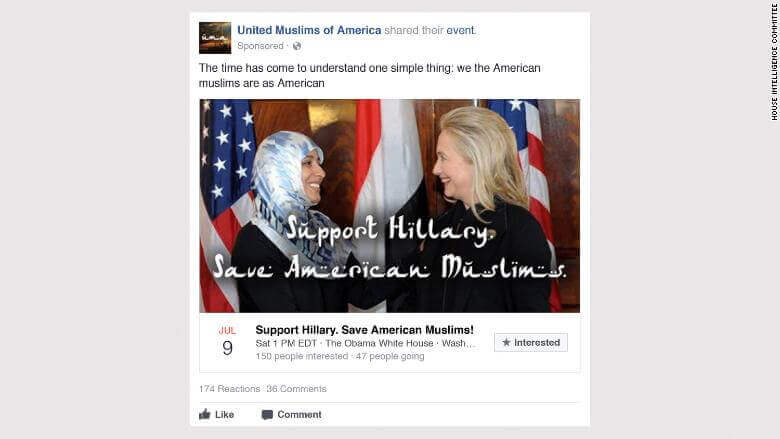 Young Mi Kim, a University of Wisconsin-Madison researcher who published some of the first scientific analyzes of campaigns on the impact of social networks during elections, said that the announcements show that Russians are trying to destabilize Western democracy by targeting extreme identity groups.

"Effective polarization can happen when you promote the idea that 'I like my group, but I don't like another group,'" Kim said. "And we know that the Russians went to extremes and then came back with various negative messages that suppressed turnout and undermined the democratic process."

The most noticeable announcement - with 1,3 millions of impressions and 73 000 clicks - shows how the campaign of influence was conducted.

Page Facebook entitled "Back the badge»19 appeared on October 2016 of the year, after the summer, during which more than 100 protests were held Black Lives Matter. 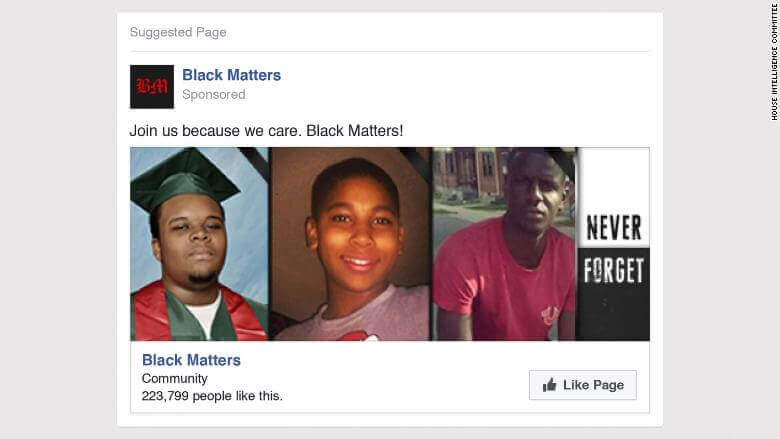 Information analyzed by USA TODAY NETWORK shows that the Internet Research Agency paid 110 058 rubles, or $ 1,785, for a place in Facebook. The group is aimed at 20-65 audiences for years who have been interested in law enforcement agencies who already liked pages like The Thin Blue, The Police Wives Unite and The Officer Down Memorial Page.

The very next day, the agency of influence paid for an ad depicting two black brothers handcuffed in Colorado. This announcement was intended for people interested in Martin Luther King, Jr., Malcolm X and the black history. Within a few minutes, the Russian company was aiming at the same group with an announcement saying that "police brutality has become the most recurring problem in the past few years."

USC professor Nick Kull, author The Cold War and United States Information Agency, says that the advertising campaign is reminiscent of tactics used in the Soviet era. His book tells how the KGB tried to disrupt the Olympics in Los Angeles, forging propaganda by threatening black KKK athletes.

“The Soviet media has always played US racism, exaggerating the levels of hate even beyond the horrific levels of reality in 1950's,” said Kull.

Adam Schiff, a minority leader on the Intelligence Committee, said that he made the ads available to the public so that scientists could explore both the intent and the breadth of targeting.

“These ads generally aimed to turn one American against another by exploiting flaws in our society or race, ethnicity, sexual orientation, and other deeply cynical thoughts,” Schiff told USA TODAY NETWORK. 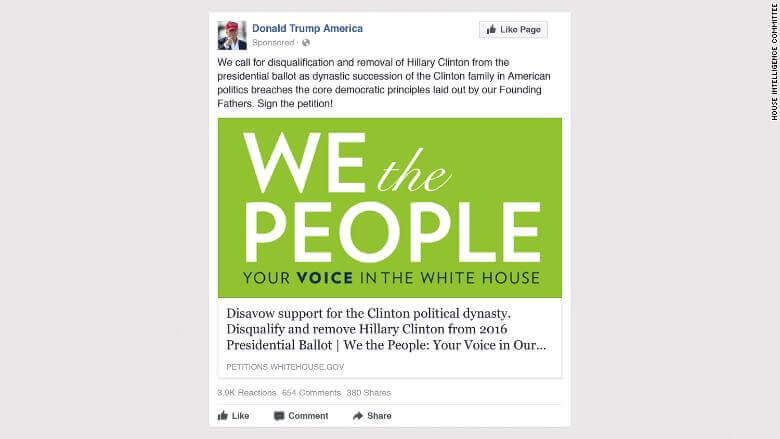 A federal grand jury in February indicted 13 on individuals who worked at an Internet research agency.

The indictment contained letters from employees of the Russian company, which left no doubt that their goal was "to sow discord in the US political system, including the 2016 US presidential election." These efforts included supporting the presidential campaign of then-candidate Donald Trump and humiliating Hillary Clinton, ”reads the indictment.

A lawyer for the two companies accused by Muller did not respond to a request for comment. One company, Concord Management and Consulting LLC, on Wednesday declared innocence in the US District Court in the District of Columbia.

An analysis of the USA TODAY NETWORK showed that Russians first used viral memes that cite banal American pop culture, such as Spongebob Squarepants and Pokémonbefore you deploy racial confrontation.

This subversive activity has only exacerbated legitimate efforts to reduce tensions towards police activities and hate crimes, said Derrick Johnson, president and CEO of the NAACP. Johnson added that Russian advertising probably contributed to the spread of "hateful, xenophobic rhetoric" throughout the presidential campaign in 2016.

There is absolutely no doubt that these announcements have further increased tensions in already sensitive situations at critical moments, ”Pascoe said.

Technological tools have changed, but the topics of confrontation have not, said Bret Schafer of the German Marshall Endowment for Democracy Alliance, which monitors the activities of Russian-linked social bots and social media trolls.

How to delete a profile in VKontakte

How to permanently delete a profile in Odnoklassniki

7 things you need to know about cybersecurity and social networks