Nikolai Shmatko - Ukrainian sculptor. When America was preparing for elections at the end of 2015, he immediately said that Donald Trump would become the next president, and he was right. He expressed his attitude towards Trump in a marble bust of Carrara stone. Next he created the sculpture of Melania Trump - from snow-white Greek marble. 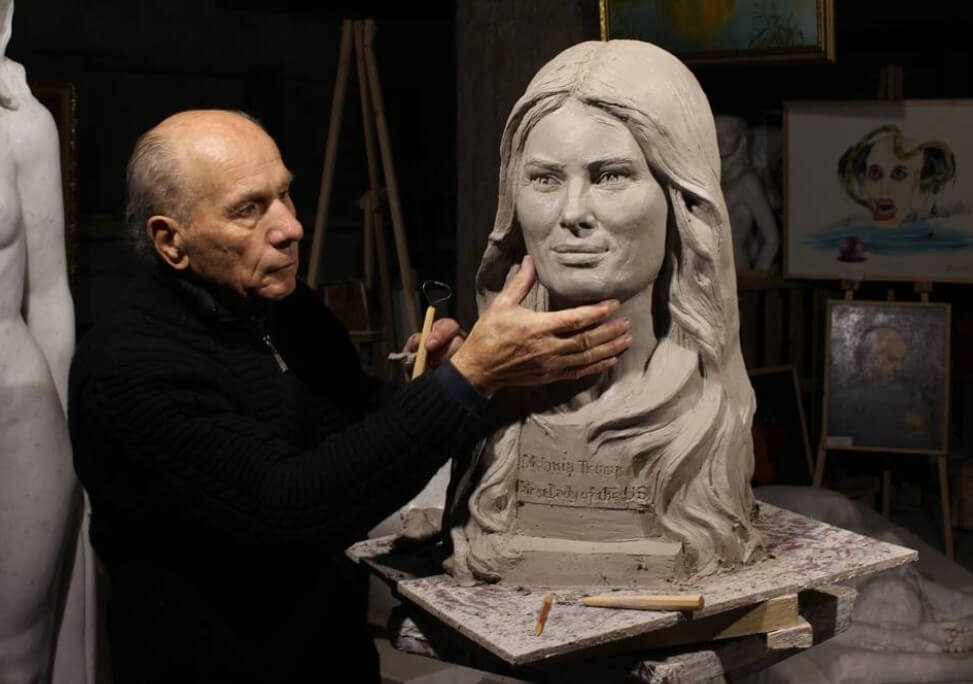 He compares Melania Trump with Nefertiti and Pharaoh Akhenaten, said on the site of the sculptor. Based on her enormous creative potential, Shmatko creates her bust of white marble. What attracted him to the first lady of the USA?

“US President Donald Trump is a big story of American reality, and his ascent to Olympus is connected with Melania. I think that her beauty and the extraordinary influence on Trump gave him additional support in the fight for the White House, the sculptor says. - Melania became for Trump support and a loyal friend in the crusade for a new America. Her erudition, openness, loyalty of Americans and the great love of her family - all these qualities are reflected in the sculpture of the first lady of the United States. "

“Melania Trump is a charismatic personality. Its amazing beauty can be compared with the beauty of Nefertiti - the ancient Egyptian ideal of beauty. The fate of these two miraculous goddesses is somewhat similar, although they are separated by thousands of years, Shmatko notes. - Greek marble allowed to reveal the versatility of Melania and the richness of its inner world. Today, the first lady has a lot of envious people, but they are all scattered like fog, and Melania Trump's marble bust will last for many, many centuries.

To create this work of art, Nikolai Shmatko announced a fundraising for the purchase of marble, but eventually bought it at his own expense. According to the artist, the creation of a “historically correct” image of Mrs. Trump in marble was his goal, and he decided to go to the end. 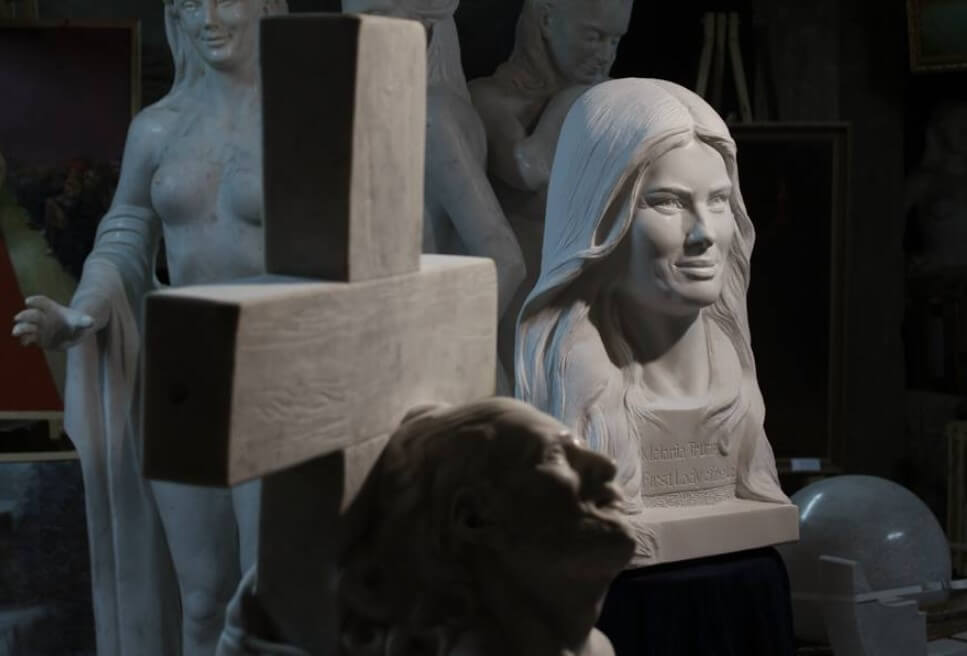 “Donald and Melania Trump are the connecting links of one chain, as the stage of a new turn in American politics. Money was needed to capture Melania’s image in marble, and I’m not a wealthy person, my pension is just 45 dollars. In addition, because of the military conflict in the east of the country, my family and the entire unique collection (sculptures, paintings and graphic works) are now in the basement of the school — I call this place “the basement of death,” says the sculptor. - For this project were needed 15 000 dollars. I used Twitter and Facebook to reach out to Americans, but my idea received no support. Then I decided to sell one of my precious items and buy marble so that I had enough time to embody the image of Melania Trump in marble for the anniversary of the inauguration of Donald Trump. I did it!".

Despite the fact that the media around the world are trying to focus attention on the negative information about the Trump family, Shmatko decided not to give in to this wave and, together with his son, spent two years working on the sculptures of Trump and his wife. 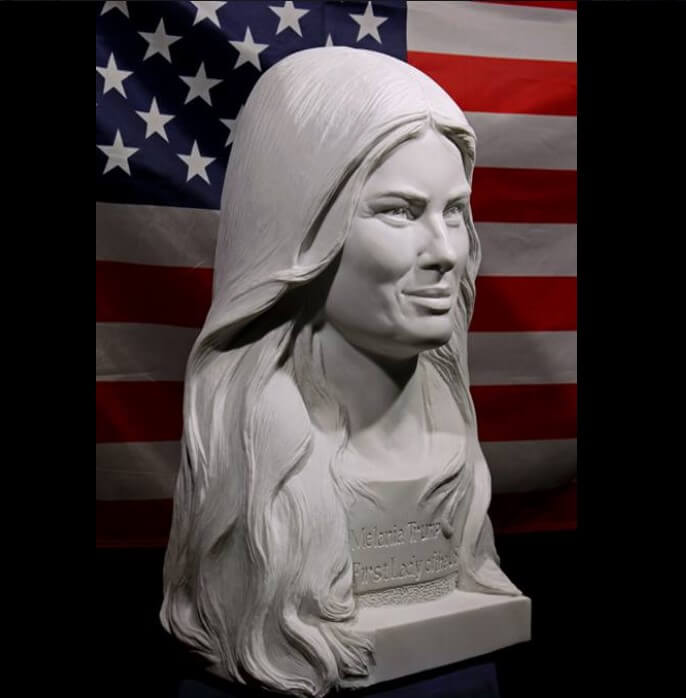 “A certain tool of ignorance beats Trump and his family! He was paid for by someone, and this negative material immediately spread throughout the world. This product is in demand and, most importantly, it is a profitable product. No, I do not regret anything, ”says the master.

Marble busts, according to Shmatko, were made as a gift to the Americans. But now the sculptor has come to the conclusion that residents of the United States will not be able to see them for several reasons, although he does not exclude such a possibility. 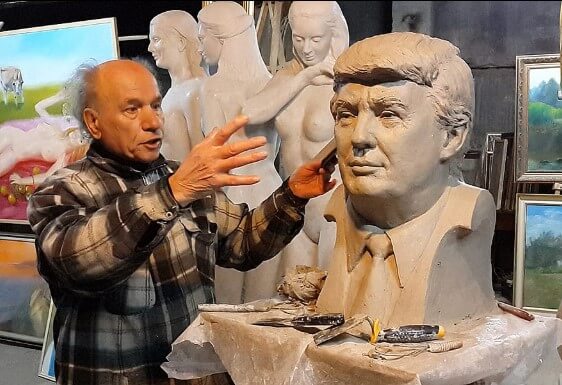 “We applied to embassies of different countries, including the US embassy, ​​but have not received any answers yet. I understand that the United States cannot accept us, because it is necessary to provide funds for the move and find a place for the gallery. 1000 artwork - can you imagine? - tells the sculptor about trying to seek asylum in the States. - We can not go home, because there is a war. So now we are hostages of circumstances, and I do not know how to get out of this cold basement ... "

According to Wikipedia, Nikolai Gavrilovich Shmatko was born in 1943 year in the Donetsk region in Ukraine. Works together with two sons. The sculptor created more than 750 monuments (bas-reliefs, high reliefs, sculptures) and around 500 paintings. 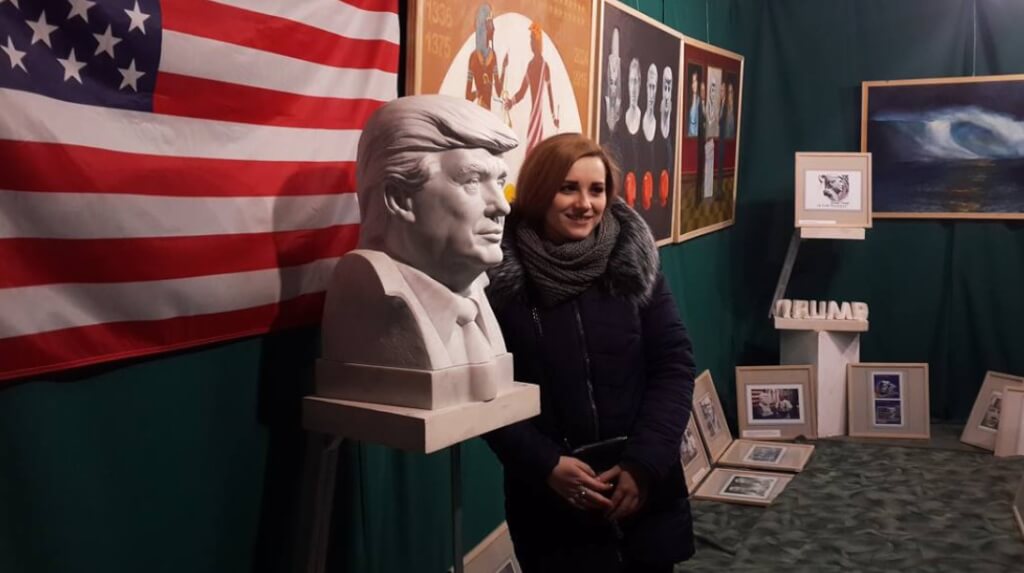 In the 2007, at the Florence Biennale for sculptures "Lugan", "Bill Gates" and "Worship disk" awarded the medal "Lorenzo the Magnificent". Nikolay Shmatko is the first of the Ukrainian participants of the Florence Biennale, who was awarded such a high mark by the international jury.

On his work, Nikolai Gavrilovich says: “I never went about anyone, I did not make political orders. I do not stoop to flattery, lies, I always do only what the heart tells me, therefore in power disfavor. So I'm going to move abroad. ”

At the festival in Italy, Trump was shown as a god from a computer game. A PHOTO. VIDEO

Apocalypse in retail: in 2020, more than 3 stores will close in the United States

Beginner English and SEO for Beginners: How to Spend a Weekend in Miami (May 29-31)

Business for 'Dummies' and Piano Learning: How to Spend a Weekend in the San Francisco Bay Area (May 29-31)

Startup course and tour of the Louvre: how to spend a weekend in New York (May 29-31)

Time Management Course and Journey to Japan: How to Spend a Weekend in Los Angeles (May 29-31)

'I'm not going there yet': after two strokes, Boris Moiseev disappeared from the screens and lives as a recluse