Home In the U.S. US extremists threaten 'civil war' if Trump loses election

A video clip of self-proclaimed supporter of the far-right group Proud Boys and blogger Walter Masterson, filmed during a Trump rally in Staten Island, New York, has surfaced online. A supporter said that if Trump is not re-elected in November, a "civil war" will begin in the country. He also advises to stock up on weapons, writes Newsweek. 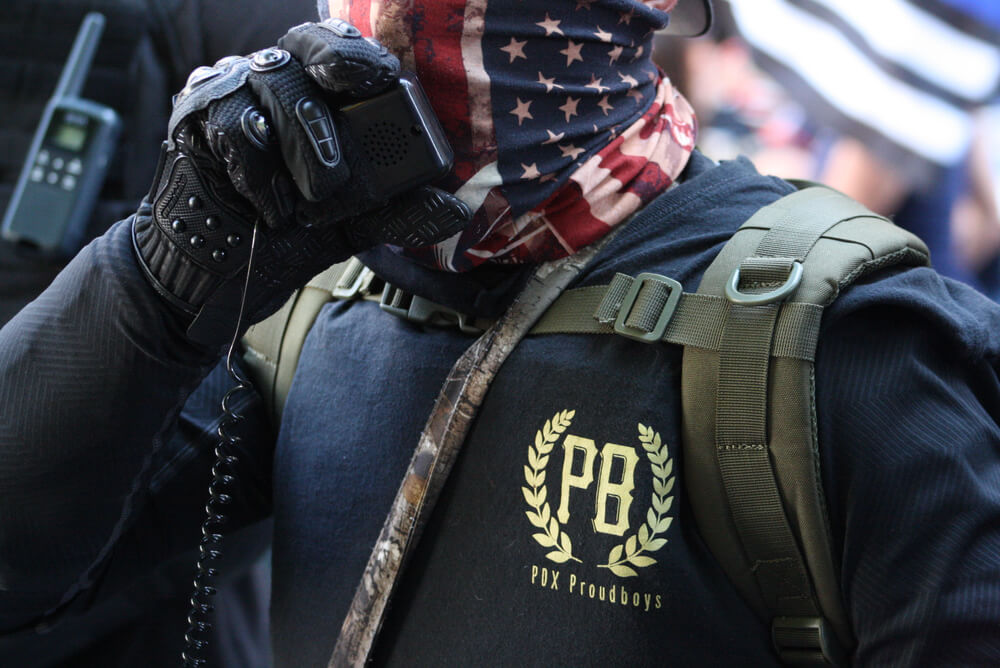 The unidentified man describes the group as “not fighting,” despite being known for violent rallies and quarrels with leftist groups and movements such as Antifa.

“But we are there. We are as Marines, we are the first to come, ”he adds.

When Masterson asked how Proud Boys responded to Trump's “step aside and be on the lookout” comments he made during the televised presidential debate, a supporter replied that the group took it as “wait for my orders.”

“And this is exactly what we are waiting for,” he added.

Then, in the video, Masterson suggests the Proud Boys are "not violent," after which the supporter states the threat of "civil war" if Donald Trump loses the election.

“If Trump is not re-elected, there will be a riot. If he is not elected, then civil war will begin, ”he adds.

“My recommendation to anyone stocking up on ammunition is to take a weapon,” the man says.

Then the interview is interrupted and the video ends.

Days after he first posted the clip to Twitter, Masterson announced that he intended to post the full interview online soon.

“Just to remind you that this is how Proud Boys interpreted Trump's call to arms,” Masterson wrote.

On Instagram, Walter added: “He was very open, he knew he was in front of the camera and he also signed the release release. He asked us to turn off the cameras during other episodes of the conversation, and we pledged to do so. ”

On the subject: The Boogaloo Boys, The Proud Boys and Antifa: Which factions are involved in the US protests

A Proud Guys supporter described how some members are following QAnon, a conspiracy theory that believes Trump is waging a secret war against the Deep State and pedophile Satanists.

When Trump was once again accused of failing to condemn white supremacy with the help of his “supporters” in the debate, Trump ultimately denounced the group that the FBI had listed as “extremist groups with ties to white nationalism.”

“I've said this many times,” Trump told Fox News correspondent Sean Hannity. “Let me be clear again: I condemn the KKK. I condemn all white nationalists. I condemn Proud Boys. I don't know much about Proud Boys, almost nothing, but I condemn that. "

Arkansas, 61, Margaret Powell never thought she would want a firearm. Until recently.

“I thought I didn't need it,” the woman admits. - I said: "Take away the weapons from people." But now my views have changed, because the world is changing right before my eyes. ”

The woman signed up for lessons in safe handling of weapons.

“It's like going back to the days of the Wild West, when everyone had a gun,” she says.

And Powell isn't the only one who thinks so. Feelings of fear and uncertainty about the pandemic, and later fears for their own safety after massive protests against racial inequality, forced many, especially African Americans, to buy firearms.

“We started out as a few people coming together,” says Damon Phin, president of the gun club. - I teach people to shoot professionally. But since March, when the governor quarantined the state, people have felt insecurity, a risk. We started receiving a lot of calls from those who wanted to buy weapons. And I decided - we will open a club. We are affiliated with the National Association of African American Gun Owners. And the number of club members doubles, even triples every day. ”

Since June, Americans have bought a record nearly 4 million firearms. The largest surge in shopping during the pandemic, according to the FBI, came in mid-March, when President Trump declared a coronavirus emergency. The second surge - in early June, in the midst of protests after the death in the detention of African American George Floyd. Club members say they are feeling interracial tension.

“When we ask people why they joined us, it's usually their own safety, the desire to learn how to shoot,” explains Fin. “With everything that happens in the world, they want to be able to protect themselves and their families.”

Various armed groups also provoke racial problems. Some promote the idea of ​​white supremacy, others promote the purchase of weapons among African Americans. With more and more rifles in the hands of people, the club says their priority is to teach new members how to use them safely.

“Self-defense is a universal law,” said club co-founder Gahiji Manderson. "We are not looking for problems, but we must protect ourselves if the problem comes on its own."

Psychologists say that often the acquisition of weapons gives the illusion of regaining control over their own lives.

“This is definitely for self-defense. I don’t want to be in a situation where I need a weapon, but I don’t have one, ”comments Margaret Powell. “I want to be able to protect myself in a situation that is difficult to imagine.”

Latin Americans also began to acquire weapons more often. Experts say that such massive arming of the population carries significant risks. In particular, acts of violence with shooting, suicides and accidents due to the careless handling of weapons by both adults and children have become more frequent. Law enforcement officials say that weapons cannot always protect if they end up in inexperienced hands. For example, a can of tear gas may be more effective.

The debate of candidates for the vice-presidency of the United States was called the most important in 40 years: what was discussed