Home loudspeakers Monument Fall in the USA: why protesters demand the demolition of historical monuments

The monument to the 26th US President Theodore Roosevelt was the latest "victim" of the movement to demolish monuments that symbolize colonial expansion and racial discrimination. The Museum of Natural History in New York has decided to demolish a bronze sculpture depicting Roosevelt on horseback, and next to him walking African and Native Americans. 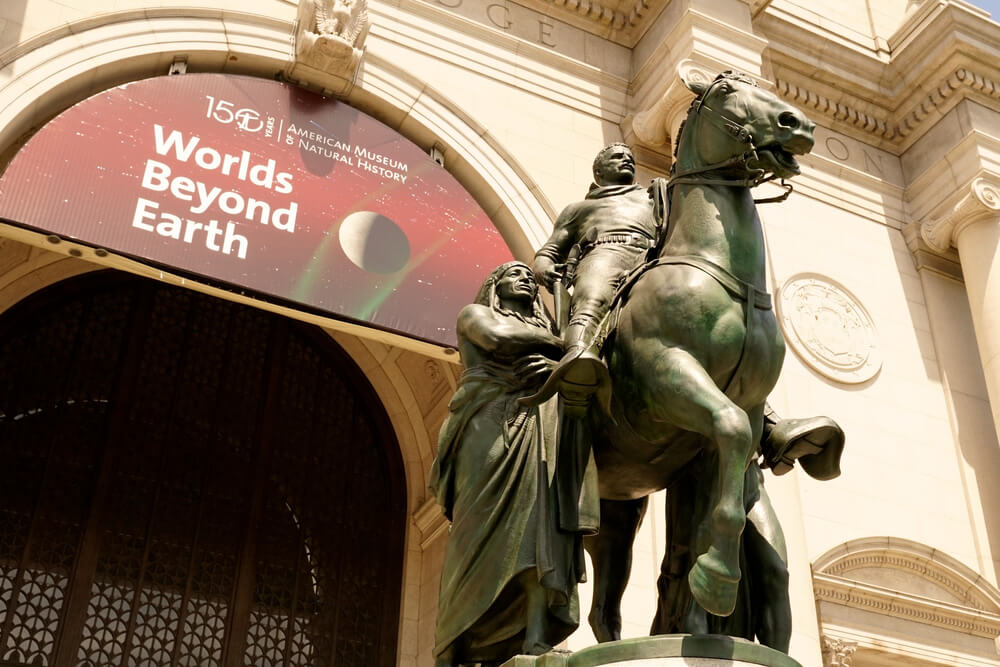 Anil Korkut conducts excursions for tourists in New York. He supports the demolition of what he calls a "textbook misconception of racial equality."

“I think the authors of the monument did it on purpose. But there is an opinion that the white president cannot be equated with African and Native Americans. And, yes, if someone gets upset about it, then we do not worship monuments. Why not tear it down? " - says Korkut.

But not everyone agrees with the plan to remove the monument. Among the opponents of the idea is New Yorker Joseph Bolanos.

“I think it's horrible when you start destroying history and monuments ... There were other times, now everything is different,” says Bolanos and adds: “And we must remember how we got to the present time through history. Obviously Stalin did the same before World War II to destroy history. ”

Tourist Jennifer Mitchell is of the same opinion: “I think it's very sad, you can't judge those people by modern standards. He was a wonderful leader, and this monument does not humiliate anyone, they are walking next to him. "

In the case of Roosevelt, the problem lies precisely in this sculpture, says Eric Roachway, a historian and author of a book about the 26th president. According to him, this monument represents a certain racial hierarchy, and even a descendant of Roosevelt himself said that he would not want the president to be remembered that way.

“During his life, Theodore Roosevelt, roughly speaking, expressed two different versions of American nationalism. One is inclusive, it talked about the recognition by Americans of different people who were not considered Americans at that time. And this is what we would like to remember - emphasizes Roachway. - He was also very supportive of colonialism and expansion to the West, in particular the seizure by force of the indigenous people. I think the statue embodies this ”.

Another figure in American history that is causing more and more controversy in society is the navigator Christopher Columbus. For some, he is a pioneer, for others - an oppressor of the indigenous population and the initiator of the slave trade.

In a number of cities, protesters are among other things beheading, defaming or pushing for the demolition of Columbus monuments, but in New York, Democratic politicians - Mayor De Blasio and Governor Andrew Cuomo - opposed. Since then, the monument has been guarded by the police.

On the subject: “It was the last straw”: Russian-speaking residents were at the center of protests in the United States

In Washington, thanks to the police, a monument to President Andrew Jackson has survived. Demonstrators wishing to overthrow the monument right in front of the White House were dispersed. Activists say the seventh US president is a slave owner and is responsible for the deaths of thousands of Native Americans.

Other demonstrations in a number of American cities ended with great success, where people demanded to dismantle the monuments to the American Confederate Army generals. In particular, this happened in North Carolina, Florida, Alabama, Minnesota, Georgia, Virginia.

Lopez Matthews, a researcher at Howard University, explains the motivation of the demonstrators: “Almost two hundred years have passed since the end of slavery, and we are still fighting racism, police brutality, unequal treatment. And these monuments to the Confederates symbolize the past, but a fictional past, because they embody the myth of the old South. ”

The myth of the Old South is the notion that during slavery, plantations flourished and black slaves were happy and joyful. In many cities there are still many such monuments.

“Nearly every southern state has a Confederate monument in the courthouse plaza,” said Sarah Bitham, professor at the Pennsylvania Academy of the Arts. “These were often places where victims were lynched. Monuments are inextricably linked with this. And, other than the state-funded idea of ​​white supremacy, they cannot be considered. ”

Speaking to supporters in Oklahoma, President Donald Trump commented on the movement to demolish monuments: "An abnormal radical left flock is trying to mutilate our history, desecrate our monuments, our beautiful monuments."

Meanwhile, the Democrats want to get rid of the confederate statues in the American Capitol, but the Republicans vetoed the initiative. The Capitol houses two monuments to figures who have made a significant contribution to the history of each of the 50 states of America. Who exactly will represent them - the states themselves decided. Out of a hundred sculptures, 12 are monuments to the Confederates.

Kore Booker, a Democratic Senator, stressed: "Preserving these monuments is disrespect for African Americans and our nation's ideals."

In response, Republican Senator Roy Blunt said that "such an action would violate our agreements with the states."

The U.S. Civil War began in 1861, when 13 states in the south of the country self-proclaimed the Confederation against the abolition of slavery. In the XNUMXth century, the Confederate flag and monuments to the generals of the army of the South became for many a symbol of opposition to the African American civil rights movement, a manifestation of the idea of ​​the superiority of the white race and racial inequality. And for many residents of southern America, the flag symbolizes pride in the heritage, freedom of each state and the memory of the American Civil War.

The original column is published on the website. Ukrainian service "Voices of America".

“We understand that you are scared”: rallies in support of detainees in Belarus were held around the world