Home In the U.S. How can you accidentally meet your twin from Texas on a plane 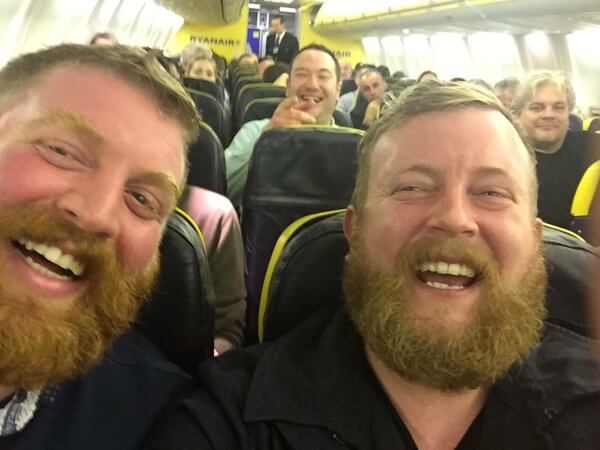 Doubles were residents of Ireland (right) and the United States (left). Photo: twitter.com/leebeattie

Irish photographer Neil Douglas, who was flying from the United States on a Ryanair flight, accidentally discovered a Texas resident in a nearby place who, like two drops of water, looks like himself - the same redhead and with the same beard.

It is reported that the men simply came to the delight of an unexpected meeting.

Despite the fact that they have exactly the same red beards, hairstyles and manner of smiling, citizens of Ireland and the United States found that they have no common relatives.

Douglas's wife's friend, Wire Media director Lee Beatty from Scotland posted a photo of the "lookalikes" in Twitter, indicating that the stranger from Texas is on the left. The photo instantly flew around the social network, gaining more than 10 thousand "retweets".

Even more surprising was the fact that the men - also quite by accident - were seated side by side.

“I can't stop looking at this. Like the same person, ”added Beatty, noting the phenomenal similarities of the young people.

Later, as the woman told the BuzzFeed edition, the adventure continued. At first it turned out that the men stayed in the same hotel in the Irish city of Galway, where Douglas was to do the wedding photography.

And then they - by accident! - met in a pub, where, of course, we not only drank a pint of beer, but also took another photo for memory.