Home In the U.S. In the United States found and destroyed a nest of 'killer hornets', but the insects managed to survive

In the United States found and destroyed a nest of 'killer hornets', but the insects managed to survive

In Washington, scientists discovered and destroyed a nest of Asian giant hornets found in the United States. The insects managed to survive, they were left for further research. The details were shared by the edition with the BBC. 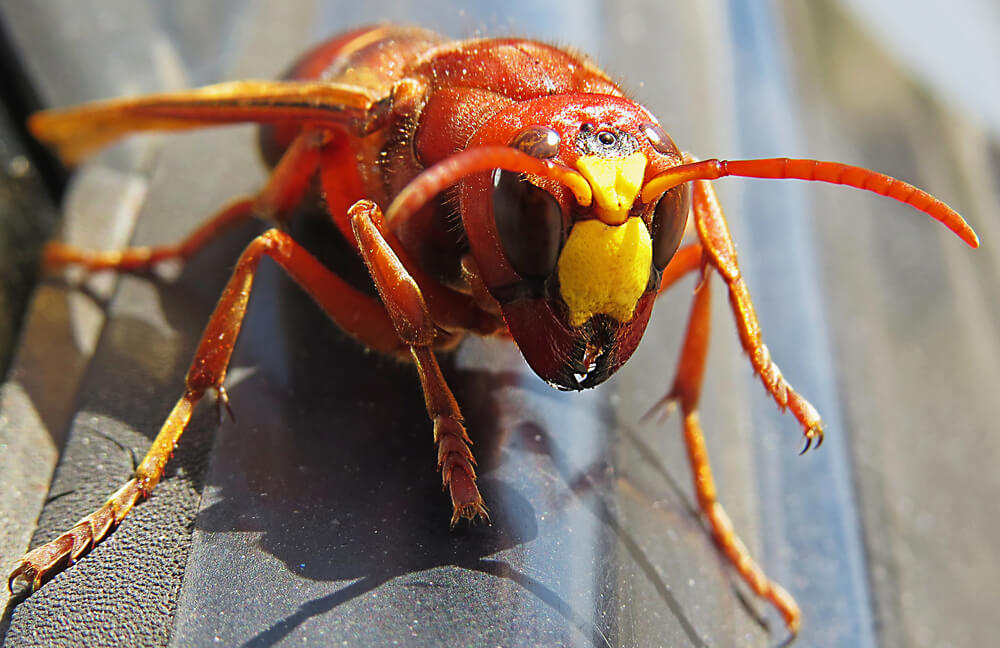 The nest in Washington state was found thanks to tracking devices attached to hornets. It was sucked out of wood using a vacuum hose.

Known as "killer hornets," these invasive insects have a powerful sting through which venom is injected. They hunt honey bees that pollinate crops and can wipe out their colony in a matter of hours.

The nest in Washington state was found thanks to tracking devices that entomologists attached to three hornets using dental floss.

They led scientists to a nest in Blaine, Minnesota, near the Canadian border. It contained about 200 insects.

On Saturday, October 24, a team of scientists in protective suits using a vacuum hose managed to get insects out of a tree. The tree must now be cut down to prevent new nests from forming.

The largest wasps in the world

Asian giant hornets are among the largest wasps in the world - queens can grow over 5 cm in length.

Their venomous sting can penetrate people's protective clothing, but the number of people they kill each year is low - about 40 annually in Asia, according to the Smithsonian Museum in Washington.

On the subject: Deadly to humans: poisonous Asian hornets discovered in the US

Their natural habitat is Asia from China to Japan, but in 2019 there were several cases of rare "killer hornets" found in North America.

Their nest was destroyed last December on Vancouver Island, Canada.

Around the world, environmentalists are deeply concerned about the decline in insect populations. However, some insects are allowed to be killed if they are invasive and prey on other insects.

Honey bees are endangered due to lack of food due to destruction of their habitats, pesticides and diseases.

When the Asian giant hornet enters a honey bee colony, it begins the "kill phase", killing bee after bee and can wipe out the entire colony in a matter of hours.

2 days after the destruction of the nest, all 85 Asian giant hornets are still alive, notes Dailymail.

The Washington State Department of Agriculture posted a short video on its Facebook page in which hornets frantically flap their wings and crawl along the inside of a plastic pipe in an attempt to escape.

Even being vacuumed out of bed on Saturday didn't stop these tough ladies. Post-eradication counting revealed that all of the 85 #AsianGiantHornets were still alive later in the day on Saturday.

No, you can't have one. The specimens are going to research. 😁 pic.twitter.com/nm3QyatcAp

Insects will not be destroyed, they are used for research purposes to uncover the secrets of invasive species.

And although the destruction of the nest was successful, experts fear that their work has not yet been completed - they believe that there are at least three more nests in the area.

The caught hornets will be divided into groups for further testing. Many have already been frozen in the -80 freezer and are preparing to be shipped to researchers out of state.

How the nest was destroyed

The tree cavity was filled with foam and covered with plastic wrap to prevent the hornets from escaping.

Then a tube was inserted to evacuate the hornets caught inside and place them in a collection chamber.

After the hornets were removed, the workers filled the tree cavity with carbon dioxide and finished wrapping the plastic around the tree.

On the subject: Killer hornets, poisonous spiders, deadly mosquitoes: 6 most dangerous insects in the USA

Managing entomologist Sven Spichiger said: "The liquidation went very smoothly, although our original plan had to be adapted due to the nest being in a tree and not in the ground."

“While this is certainly a morale boost, it is just the beginning of our work that will hopefully prevent the Asian giant hornet from gaining a foothold in the Pacific Northwest. We suspect there may be more nests in Watcom County. ”

Officials plan to cut the tree down in the coming weeks and then open the trunk to see how large the nest was and also determine if it has begun producing new queens.

The group expected the hornets to die during the prey, but this did not happen.

Washington State and the Canadian province of British Columbia are the only places on the continent where hornets have been found. It is unclear how they got to North America.

In one of the US states, an invasion of giant tarantula spiders began

Deadly to humans: poisonous Asian hornets discovered in the US