Home In the U.S. The CDC officially recognized another way of spreading coronavirus

The US Centers for Disease Control and Prevention (CDC) has updated guidance on its website, which states that the coronavirus can spread “through respiratory droplets or small particles such as aerosols,” which are formed even when a person breathes. CNN. 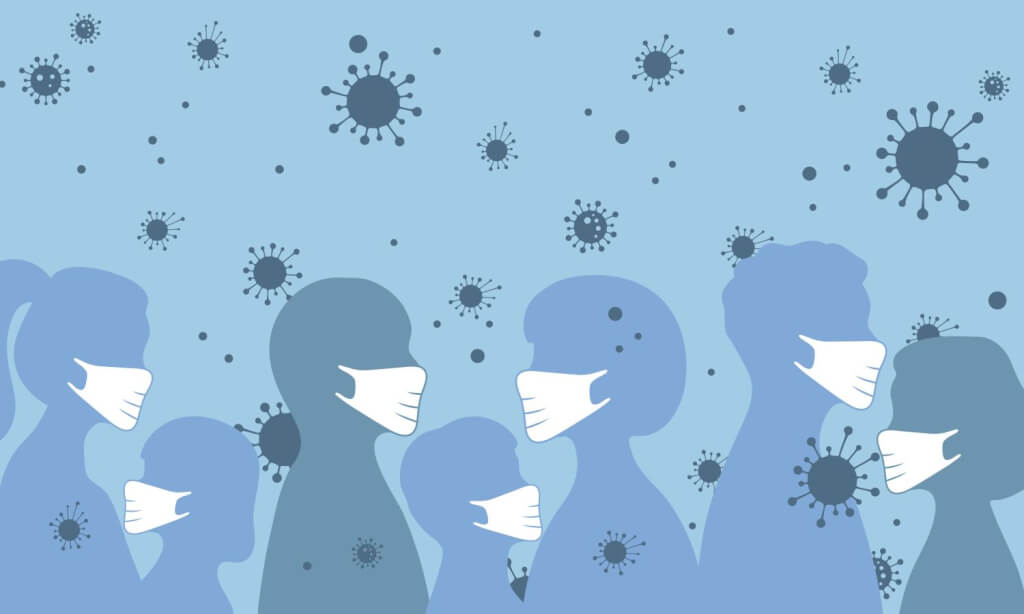 "Airborne viruses, including COVID-19, are among the most contagious and easily spread," the website says.

Earlier on the CDC page, it was said that COVID-19 was thought to spread primarily between people in close contact - less than 6 feet (1,8 meters) apart - and “through the respiratory droplets that form when an infected person coughs , sneezes or talks. "

On the page updated on September 18, it is still said that COVID-19 most often spreads between people who are in close contact with each other, but now it has been added information that the virus spreads “through respiratory droplets or small particles, for example, in aerosols formed when an infected person coughs, sneezes, sings, talks, or breathes. "

These particles can cause infection if "inhaled into the nose, mouth, respiratory tract and lungs."

"It is assumed that this path of the virus spread may be the main one," the website says.

“There is growing evidence that droplets and particles can remain suspended in the air and travel distances of more than 6 feet (for example, during choral singing, in restaurants or in fitness classes), and they can be inhaled by humans,” the manual says. ... "In general, rooms without good ventilation increase this risk."

The CDC has also added new measures to information about protecting ourselves and others.

Previously, the CDC suggested maintaining a "good social distance" of about 6 feet, washing your hands, regularly cleaning and disinfecting surfaces, and covering your mouth and nose with a mask when you are around other people.

On the subject: Patient with influenza COVID-19 is not threatened: virologist spoke about the relationship of viruses and quarantine

It is now recommended to “keep at least 6 feet from other people if possible”, wear masks, and continue cleaning and disinfecting surfaces. The guide adds a recommendation to stay at home and isolate yourself if you are sick and to “use air purifiers to reduce airborne germs in rooms.”

It also notes that masks should not replace other preventive measures.

The update also changed the wording of asymptomatic transmission of the virus. It used to say that "some people without symptoms can spread the virus," now it sounds like "people who are infected but do not show symptoms can transmit the virus to others."

For months, scientists have noted the likelihood of transmission of the coronavirus through airborne particles and urged health authorities to admit it. In April, an authoritative research team from the Harvard School of Public Health told the White House in a letter that research has shown the possibility of transmitting the virus not only through sneezing or coughing, but also through talking, or perhaps even breathing.

And in July, 239 scientists published a letter urging the World Health Organization and other civil society organizations to publicly acknowledge the likelihood that people could catch the virus from droplets floating in the air.

“Most public health organizations, including WHO, do not recognize airborne transmission. Hand washing and social distancing are acceptable, but, in our opinion, insufficient to protect against respiratory viruses carried by microdroplets released into the air by infected people, ”the scientists wrote in a letter published in the journal Clinical Infectious Diseases.

On the subject: Infectionist names 14 everyday mistakes that increase the risk of contracting coronavirus

After the letter was published WHO released a report, which described in detail how the coronavirus can be transmitted from one person to another, including through the air during certain medical procedures and possibly through the air in crowded rooms.

On September 20, one of the letter's lead writers, Professor Donald Milton of the University of Maryland, who is studying how viruses are transmitted, said the CDC had made "major improvements."

“I am very pleased to see that the CDC is paying attention to this and moving forward with science. Evidence is piling up, ”Milton wrote in an email to CNN.

Opinion: quarantine was a huge mistake