Home In the U.S. 'The feeling is that we were betrayed': thousands of soldiers guarding the Capitol were kicked out into the street

Thousands of National Guardsmen were allowed back into the Capitol on Thursday evening, January 21, hours after US Capitol police officers ordered them to leave the premises and sent them outside. Writes about it Political. 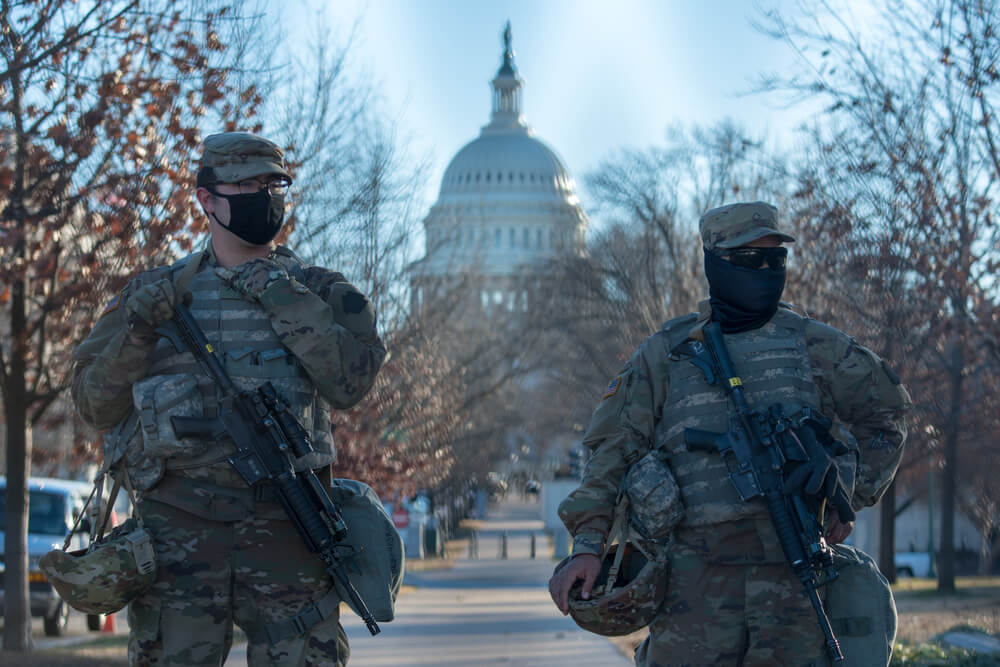 According to one of the guardsmen, their unit, which was resting in the Senate building, was suddenly ordered to leave the building on January 21. The person said the group was forced to move to a nearby garage with no internet access, one electrical outlet and one bathroom. The total number of soldiers was 5000. By evening, the air temperature in Washington dropped below 40 degrees Fahrenheit (4,5 Celsius).

“Just yesterday, dozens of senators and congressmen walked beside us, took pictures, shook hands with us and thanked us for our service. Within 24 hours they did not need us, and they drove us into the corner of the garage. The feeling is that we have been betrayed, ”said the guard.

All National Guard troops were ordered to leave the Capitol and nearby Congress buildings on Thursday, January 21, and establish mobile command centers outside or in nearby hotels, another guard confirmed. According to the person, they were told to take rest breaks during the 12-hour shift outside and in garages.

Leading bipartisan lawmakers on Twitter condemned the move, with some even suggesting using their offices as recreational areas. Senate Majority Leader Chuck Schumer wrote: “If this is true, then this is outrageous. I'll get to the bottom of it. " Senator Tom Cotton noted that the Capitol complex remains closed to members of the public, "so there is plenty of room for troops to rest."

By 22:00 pm Senator Martin Heinrich said the situation was "being resolved" and the guards could return later at night.

“I just made a few calls and was informed that Capitol police have apologized to the Guardsmen and will be allowed to return to the complex tonight,” Senator Tammy Duckworth added. "I will check to see if they were allowed back."

A Politico source in the Guard confirmed late on January 21st that all troops had been ordered to return to the Capitol.

General Janine Birkhead, the inauguration task force commander, confirmed shortly after midnight that the troops had exited the garage and returned to the Capitol Building as authorized by the commander. In the future, they will rest near the Liberation Hall.

In a statement, Capitol Police spokeswoman Eva Malecki said the department recently requested that troops be cut from 12:XNUMX to XNUMX:XNUMX to provide additional hours of rest away from the Capitol complex. The statement says nothing about why the guardsmen were placed in the garages.

The servicemen were not explained why they were asked to leave the building. The first guardsman said that this could be due to a complaint that some of the soldiers did not wear masks.

“We have a strict instruction that masks should always be worn if the soldiers do not eat or drink,” the soldier explained.

“In response to Congress and the increased attendance and expansion of business operations, Capitol Police have asked troops to move their recreational areas,” Murphy said. "They were temporarily transferred to a garage at the Thurgood Marshall Judicial Center with heating and a toilet."

The guards have not made a decision and "are doing everything possible to provide a refuge for the rest of the soldiers who still defend the Capitol and the territory of Congress," said the second guard.

Military personnel are particularly concerned that during a pandemic they will live in cramped quarters with limited access to toilets. According to two soldiers, 100 guardsmen tested positive for COVID-19. Some are under quarantine in hotels.

A spokesman for the US National Guard declined to name a specific number of military personnel who tested positive for the virus.

Thousands of troops have already fled Washington after about 25 were called to DC to help protect it from potential threats ahead of President Joe Biden's January 20 inauguration.