Home In the U.S. Landslides, floods and falling iguanas: a series of dangerous storms covered the USA

Landslides, floods and falling iguanas: a series of dangerous storms covered the USA

In late January and early February, storms over the Pacific Ocean will continue to travel across the northwestern United States, giving the impression that Mother Nature launched a long freight train with rainfall over America. AccuWeather.

During the winter period, storm currents may be commonplace for permanent residents of the Northwest, but many are already tired of the ruthless storm regime, which will last until the end of January, and possibly longer. Meteorologists say that the sun's rays will be in short supply.

As storms travel over the northern Pacific Ocean and extend northwest, they can hit this region on average every one to two days.

As the snow level drops only a few thousand meters relative to sea level, storms will bring heavy rains at low altitudes. Each storm can bring in a few tenths of an inch to a couple of inches (5 cm) of rain.

As the succession of storms progresses, individual cases of flooding in cities, landslides and landslides during rain are expected. Over an approximately 2-week period, it is likely that in some regions 6-12 inches (15-30 cm) of rain will be expected in the form of rain with a locally higher amount of rainfall in the lowlands, on the west-facing slopes of the Olympic Mountains and the Cascade Mountains of Washington and Oregon.

Motorists should be careful when driving on minor mountain roads, as debris can be washed to the surface of the road, and in some extreme cases the road itself may be blurred.

The problem may be the level of snow, which rises above average relative to sea level. According to AccuWeather senior meteorologist Dave Samuel, during a series of storms the snow level will be higher - precipitation will be at altitudes from 4000 to 6000 feet (1,2-1,8 km).

On the subject: 20 useful things that every winter should be in every car

“Rain will cause significant melting of snow at intermediate elevations and increase the downward flow, which will significantly increase the risk of forming a stream and flooding the river,” Samuel said.

At the passes, it will periodically snow or a mixture of snow and rain. Driving through the pass, motorists must comply with traffic safety rules. Even in mild weather, fog and gusty wind in these areas can be a problem.

In cities such as Spokane, Washington, as well as Dulles and Medford, Oregon, unlike mid-January, there will be virtually no snow. 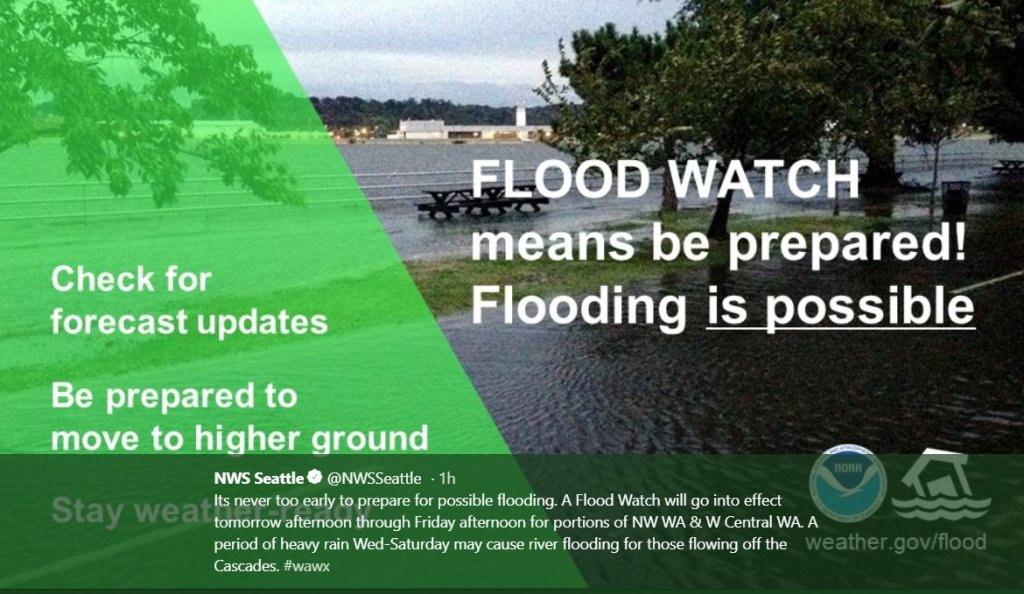 Over the Cascade Mountains of Washington and the Olympic Mountains, each coastal storm will bring a total of 6-12 inches (15-30 cm) of snow, in some places it may be more. Snow will also accumulate over the Oregon Cascade Mountains, and every third storm, on average, has every chance of bringing snow to northern Sierra Nevada in California.

Excessive snow, intermittent gusty winds and variable air temperature will increase the risk of avalanches, which becomes higher with each storm. Deviation from the marked and verified route can be life threatening.

According to weather forecasters, these storms may not become extremely strong, but their constant flow can lead to coastal erosion and periodic coastal floods.

635 AM Radar Update | Rain is sliding north this morning across the area. Rain for much of today through Thursday. Give yourself extra time if you're heading out this morning! #WAwx pic.twitter.com/LCSv7O5jgH

Residents of Florida and Georgia warned of falling iguanas

Since the coldest air of the season spreads over the eastern part of the USA, the temperature drops even in the southernmost states: from Louisiana to North and South Carolina and Florida, the air warms up on average by 10-15 degrees less than normal. January 22, there are warnings of hypothermia and freezing in Florida and Georgia, writes CNN.

On the afternoon of January 21, the National Weather Service in Miami issued a rare forecast for relatively low temperatures, but it concerned the iguanas. Yes, you read that.

“Don't be surprised if you see iguanas falling from trees tonight,” the weather service said on Twitter. 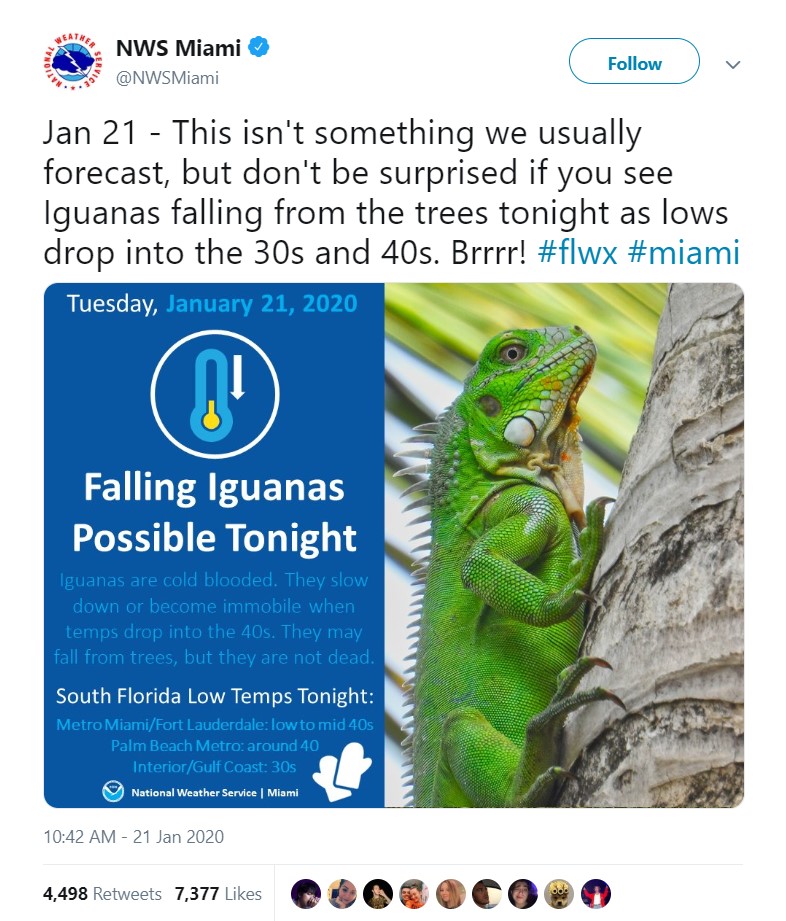 Iguanas often sleep on trees when their bodies are stupid due to low temperatures. Therefore, they fall on the streets, cars, pools and even on people walking around - it seems that the iguana has fallen from the sky. And since iguanas are quite large (adult males can reach 5 feet in length and weigh up to 20 pounds - this is 1,5 meters and 9 kilograms), a fall can be dangerous for humans.

Iguanas do not tolerate cold - as soon as the temperature drops below 50 degrees Fahrenheit (10 Celsius), iguanas begin to become lethargic and fall into a state of stupor. They seem dead, but they are not. Iguanas continue to breathe, although their body functions are in critical condition. This is a way to protect their bodies.

If temperatures persist in the region of 40 degrees (4,4 C) for eight or more hours, many iguanas will die, especially small ones.

"The temperature threshold at which iguanas begin to go to rest depends largely on the size of the iguana," explains Ron Magill, communications director at Zoo Miami. “The larger the iguana, the longer it can tolerate low temperatures.”

On the subject: How to avoid hypothermia in the winter: useful tips

Many iguanas in South Florida have adapted to penetrate burrows, where they remain isolated from the cold. They usually also live near large bodies of water, which are usually warmer than air temperature, which helps them survive short-term cooling.

However, not everyone is concerned about the well-being of iguanas. They are considered invasive species, so some people are eagerly awaiting the opportunity to rid their yards of these reptiles.

“I know that there are several iguana hunters who are looking forward to the upcoming cold front, as this will make it easier for them to remove aggressive reptiles from the environment of South Florida - iguanas will not be able to escape,” Magill said.

In a small town in Alaska, an early census began: what is the reason for the rush

In South Carolina, a tornado swept through the school parking lot, injuring dozens of cars