The winter storm system, which brought snowfall from the Great Lakes to New England, went to the ocean, but this does not mean that frosty weather will take a break. About 10 million people living from Montana to Illinois can face dangerous cold weather, and even in Miami it will be so cold that iguanas can freeze and numb, writes CNN. 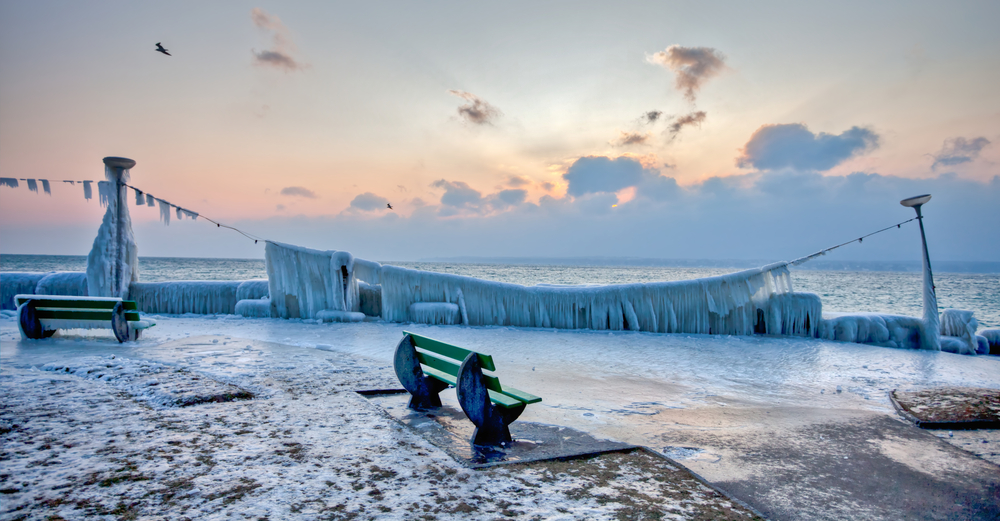 According to the publication, low temperatures are enhanced by strong winds - so the cold is felt more strongly. The northern plains and the midwestern United States will experience temperatures that “feel” like -20-40 degrees Fahrenheit (-29-40 degrees Celsius). Such cold with the wind can cause frostbite on open skin in just 10 minutes.

In case you haven't had a chance to look out the window, it's snowing in northern Michigan! Did your area get a lot of snow? Share your photos and videos with us at https://t.co/5xaVOvr1bH under the weather tab! pic.twitter.com/HNFvClh4VV

It is expected that on January 20 and 21, strong cold air will flow from the Midwest to the east of the country, and from the state of Maine the cold streams will move south and go so far that they get to the Florida Keys. Starting January 20, the temperature can be 10-15 degrees below normal.

On the subject: “Our winters are not like they used to be”: what happens to the weather in the USA, and where does the fish

It is predicted that by the morning of January 22 in Miami, the temperature will drop to 43 degrees Fahrenheit (6 Celsius): it is cold enough for numerous iguanas in this region to slow down their livelihoods. Temperatures below 50 degrees Fahrenheit (10 Celsius) can introduce the iguana into a stupor, or hibernation. In appearance, such an iguana may seem frozen in place and even dead, in fact, it is simply fettered and leaves this state when the temperature gets higher. Here's how it might look:

Frozen iguana in our yard. 🙈😳🦎 pic.twitter.com/vZnxZ41jNy

After awakening, iguanas can be aggressive, so residents are advised to be careful.

In the Midwest, winter weather has led to difficult road conditions. According to the Minnesota State Patrol, on January 18, at least 341 accidents were recorded between morning and afternoon, and 302 cars either turned around or got off the road. According to the patrol, 35 people were injured, but no one was seriously injured.

Shocking video today from a delivery truck on I-80 in Western Iowa. The AMCON Distributing driver, State Trooper, & occupants in the pickup truck were not seriously injured.

If you have to be out driving during inclement weather- slow down and be aware of the road conditions. pic.twitter.com/tXqMAOjCjz

Strong winds caused ground blizzards in western Minnesota on Saturday. The sun illuminated through the blowing snow creating a faint ring around it. This atmospheric optical phenomenon called a "sun dog." pic.twitter.com/zpMz1YznKd

Some states have urged drivers to stay clear of roads. On the same day, the weather was unfavorable for air travel, but by January 19 the situation had improved. Incoming flights at JFK New York Airport were late on average by 2,5 hours on January 18 in the evening, and on January 19 there were only 120 flight cancellations.

On the subject: Due to the weather, a 2-hour domestic flight turned into a 36-hour exhausting journey

In Canada, a blizzard set a record

Canada’s easternmost province fell under a 30-inch (76 cm) thick snow on Friday, January 17 - a record for the amount of snow that fell in 24 hours, writes Fox News. Residents of the capital of the province of St. John's struggled to clear the snowdrifts from 12 to 15 feet (3,6-4,5 m) high that remained after the storm. Snowfall led to a series of power outages and the closure of enterprises, and roads were cleared exclusively for ambulance traffic. Officials called in the Canadian armed forces to eliminate the effects of the weather.

Local residents report that the snow covered not only cars, but also the first floors of many houses.

The unprecedented snowfall in St. John's buried countless cars overnight, including this one. # NLStorm2020 pic.twitter.com/oYDY3ujbJG

Canadian meteorologists called this storm a “bomb,” which was rapidly building up its strength. Although the storm was short, it turned out to be extremely ferocious even for an area where strong ocean storms occur in winter.

❄️ ⛄️ 🧊 This was what that 24 hours of snow looked like Newfoundland! #Canada #NewfoundlandStorm #newfoundlandblizzard pic.twitter.com/yuDdQOpAxl

Nearly 7 customers in the St. John's area experienced power outages on January 000, and 18 customers had problems on the eve, local Newfoundland Power said.

The Newfoundland and Labrador Department of Transportation and Works reported that on January 17, snowplow operators processed more than 100 requests for help, including 24 from ambulances, 23 from the police, and 60 from the population.

In New York, water pipes broke again and paralyzed the work of the subway

In a small town in Alaska, an early census began: what is the reason for the rush