Democrats in the House of Representatives put forward two articles of accusation to President Trump, deploying the most powerful tool that Congress has under the Constitution for the fourth time in US history. 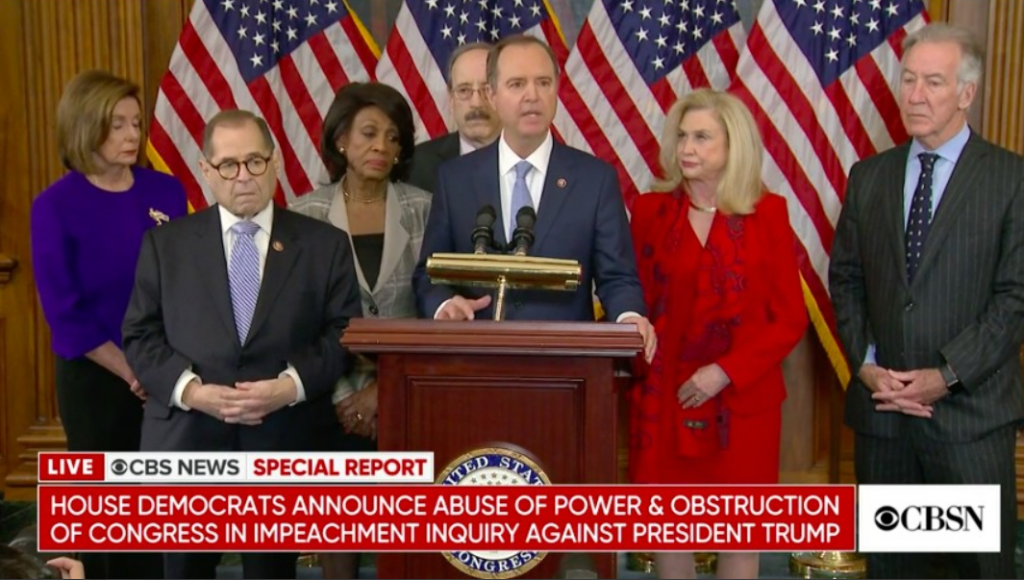 “The articles include accusations of abuse of power and obstruction of Congress,” said House Justice Committee chairman Jerry Nadler in a statement on Capitol Hill. CBS News.

“Today, in fulfillment of its duty to the Constitution and to our country, the House Judiciary Committee is submitting two articles of impeachment accusing United States President Donald Trump of serious crimes and misconduct,” said the chairman, speaking with House Speaker Nancy Pelosi and other committee chairs.

On the subject: Impeachment, Marijuana, Putin: The Main of Democrats' New Debate

As it became known at 6:00 am local time on Tuesday, December 10, the chairmen of five committees of the House of Representatives scheduled an announcement of the "next steps" in the impeachment investigation at 9:00 at the Capitol. Chaired by Jerry Nadler of the House of Representatives for Judicial Affairs; Adam Schiff of the Intelligence Committee; Eliot Engel, Department of Foreign Affairs; Maxine Waters of Financial Services; and Carolyn Maloney of Congressional Oversight.

In 8: 05 in the morning of local time, when Democrats of the House of Representatives were preparing to reveal two articles about impeachment against US President Donald Trump, he again defended himself from the charges and called their efforts "political insanity."

“Bringing to justice a president who has proven by his results, including creating what is arguably the strongest economy in the history of our country, has one of the most successful presidential terms in history, and most importantly, he did NOTHING wrong, is pure political madness! " - wrote Trump on Twitter.

“Hardworking Americans know that this deception, the Democrats are turning impeachment into a weapon to try to undermine @realDonaldTrump, which has done nothing but kept promises and is fighting for our country. Their behavior is shameful, but this will only serve to further unite our party, ”she wrote.

In 9: 12 local time after Pelosi made a short introduction, she allowed Nadler to declare specific articles about impeachment.

Nadler said the president is trusted by the public, but has placed himself above the Constitution. Article developers provided a clear remedy for such a violation, he said.

Nadler then presented two specific articles - abuse of power and obstruction of Congress.

In 9: 19 local time, House spokesperson Adam Schiff, who led the investigation into the president’s alleged behavior, argued that Democrats do not have time to wait in court to decide whether senior presidential officials are forced to agree to subpoenas because it can take months.

He also argued that waiting until next year's elections is not an option.

“It looks like the president’s oath means little to him, but the accusations made today will give us a chance to show that we will defend the Constitution and that our oath means something to us,” Schiff said.

Democrats claim Trump abused his power by trying to use the White House meeting and nearly 400 million dollars in military assistance to Ukraine to force President Vladimir Zelensky to announce an investigation into former Vice President Joe Biden and the 2016 election of the year.

They also criticized the Trump administration for blocking all subpoenas and documents related to the executive’s investigation, arguing that the president was trying to obstruct Congressional legal oversight.

On the subject: Trump impeachment report released: what the president is accused of

“For months, Nancy Pelosi said she would not move forward with impeachment because it was too controversial and needed bipartisan support,” Parscal said. - Well, this is debatable, and only the Democrats insist on it, but she continues anyway. Americans disagree with this, but Democrats are unfolding this political theater because they don't have a viable candidate for 2020 and they know it. "

Recall that now the Senate is also under the control of the Republicans, which is likely to save Donald Trump from impeachment.

Head over heels in debt: Harry and Meghan Markle bought a mansion on a mortgage from a Russian