On the evening of November 20 in Atlanta, Georgia, a new debate took place on Democratic presidential candidates. 10 participants competed among themselves. During this debate, many jokes and sharp remarks about each other sounded from the stage. Edition "Voice of America" told what the democrats were talking about. 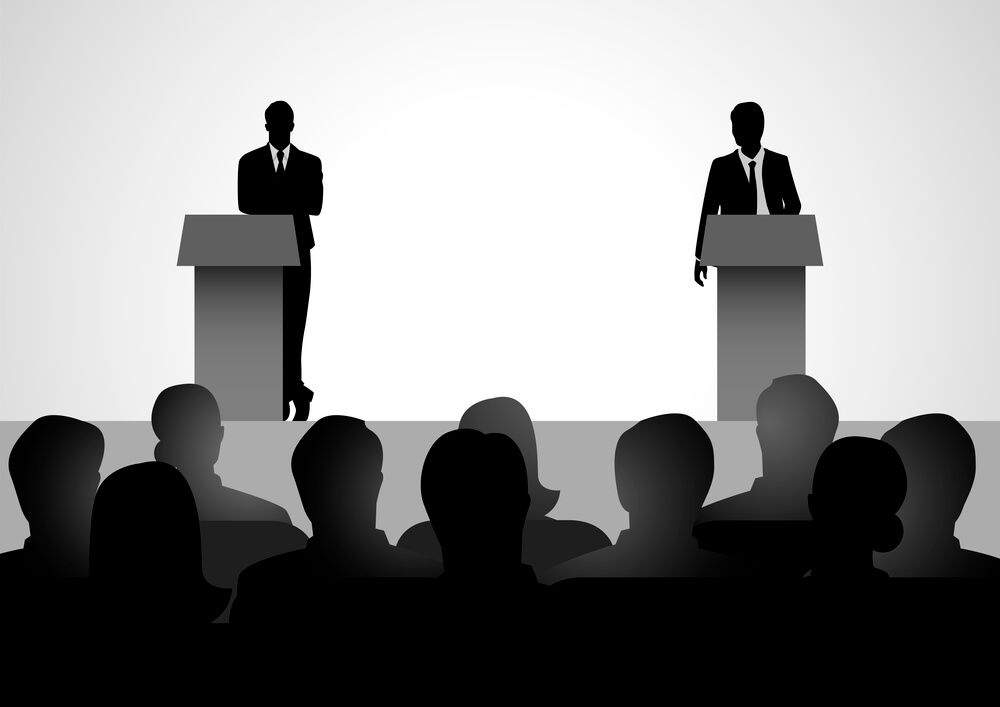 This time, the debate took place a few hours after a public hearing in Congress on the impeachment of US President Donald Trump. As in previous times, the debate began precisely with this topic.

Senator Elizabeth Warren, one of the race's leaders, hinted that Congress should declare impeachment earlier. “Read the Mueller report. It says on 450 pages that the president obstructed justice. But then Congress lost the ability to act, and the president is breaking the law again. ”

The senator criticized the US ambassador to the EU, Gordon Sondland, testifying in Congress. “How did he even become an ambassador? He has no qualifications - only money. This is another confirmation of the corruption that exists in Washington, ”said Warren.

Joe Biden recalled the war in eastern Ukraine from the stage: “During these impeachment investigations, I learned two things for myself. First, Trump doesn't want to see me as his rival. He has delayed military aid to Ukraine while innocent people are dying in Donbas. Secondly, Russian President Vladimir Putin also does not want to see me President of the United States. "

On the subject: How to choose the president of the United States: a simple explanation of the complex electoral system

Subsequently, Biden was asked whether he believed that if he resigned or lost the election, Donald Trump would need to be imprisoned. “I will not run the Department of Justice the way the current president does. I will not indicate who the investigation should be against. This is the authority of the attorney general, and he will make an independent decision whether the president committed a crime while in office. And the US attorney general is not the president's private lawyer. "

“But I don’t think putting Trump behind bars is a good idea, because we need to unite the people. An impeachment investigation is one thing. Investigation after Immigration, if Trump is dismissed, is a completely different thing, ”Biden said. Senator Bernie Sanders agreed with him.

Senator Kamala Harris of California joked: “We're keeping a criminal in the White House. And he is the head of a criminal gang, which also includes a vice president, secretary of state and head of the presidential administration. "

“This guy has no idea what he is doing,” Biden emphasized.

On the subject: Why is the US president chosen by electors, not voters

The former US vice president promised that if elected, he would stop selling American weapons to Saudi Arabia.

Vermont Senator Bernie Sanders reaffirmed his unwavering support for Israel, but noted that "the Palestinian people should be treated with the respect and dignity that they deserve."

After that, we went on to discuss internal issues: taxes, health care, problems with housing prices.

The presenter asked presidential candidate and entrepreneur Andrew Young for his first call to Putin if he won. “The first thing I would say: I'm sorry that I defeated your boyfriend. Or do not forgive, ”Young answered, which caused laughter in the hall.

He cited allegations that Russia intervened in the US election campaign in 2016 in an attempt to facilitate the election of Donald Trump. Moscow categorically denies these allegations.

However, Young's statement reflected the conviction that Russia was really trying to help Trump take the presidency.

The businessman, who at the moment is not one of the leaders of the presidential race, also emphasized that he would tell Putin: “Russia's intervention has come to an end. And we will consider any attempt to undermine our democratic process as a hostile act and an act of aggression. "

Young also promised to strengthen United States commitment to NATO, noting that a coalition of like-minded countries is the best way to confront aggressors.

In general, this time many jokes sounded from the stage. Senator Amy Klobuchar joked that she had raised 17 000 dollars for her campaign from her ex-boyfriends. Candidate Pete Butige said he wouldn’t fly a helicopter over his golf course and added, “I don’t even play golf!” Senator Cory Booker said that he has a lot of experience when it comes to black voters: “I became one of them in 18 years. "

After that, Senator Booker, sarcastically addressing Joe Biden, urged candidates not to “wet” each other, as in past debates.

“Last week, Joe Biden said that we should not legalize marijuana. Sorry, but I think I had to smoke to say that. ” When the laughter subsided, Booker continued: “There are people in Congress who admit that they smoked marijuana. But after all, black children are in prison for this. ”

Biden replied: “I believe that marijuana should be decriminalized. Dot. But at the same time, we must investigate the long-term consequences of its use. ”

On the subject: Battle for America: What you need to know about the US presidential election

This is not the only verbal skirmish between the candidates. Congresswoman Tulsi Hubbard accused her rival Pete Butige of intent to expand the US military presence in the world. Next, a dialogue took place between them:

Hubbard: “You said the United States would send its army to Mexico to fight cartels.”

Butage: “I did not say. But you met with Bashar al-Assad in Syria. I would not have sat down at the negotiating table with a dictator killer like him. ”

Hubbard: “This means that you would not have the courage to do this for our national security. As President Kennedy did when he saw Khrushchev. Like Roosevelt did when he saw Stalin. Like Reagan, meeting with Gorbachev ... "

On the eve of the debate, Pete Buttagege, the former mayor of South Bend in Indiana, was in the limelight. In the past few weeks, Buttage has unexpectedly led some Democratic ratings based on opinion polls.

Democrats again, as in past debates, argued about an approach to health care and social insurance reform. Moderate Democrats, including Buttage and Biden, are in favor of improving the existing system, and the party’s left wing, led by Warren, is in favor of implementing Medicare for All.

Until recently, ratings were led by three politicians - Joe Biden, Elizabeth Warren and Bernie Sanders. However, according to the results of the last two opinion polls, the 37-year-old Buttijage unexpectedly topped the Iowa voters preference ratings.

However, African American voters have not yet supported Buttijage. The University of Quinnipack on Monday published the results of a poll conducted in South Carolina, where African-Americans make up about 60% of the democratic electorate. According to this opinion poll, the former mayor of South Bend is not popular among black voters.

Buttage did not have a relationship with African Americans living in South Bend. In 2012, he fired the first black chief of the city police, and at the beginning of 2019, protests took place in the city after a policeman shot and killed an African American.

Among other topics, Democratic presidential candidates focused on the rights of women, African Americans, and migrants in the United States, as well as dealing with climate change. The next debate of the Democrats will be held in December.

Why is the US president chosen by electors, not voters

Battle for America: What you need to know about the US presidential election