Home At home Hellish 'meat grinder' in the subway of Rome: details of the accident with Russian fans appeared. VIDEO

Hellish 'meat grinder' in the subway of Rome: details of the accident with Russian fans appeared. VIDEO

About 30 CSKA football fans were injured in the collapse of an escalator at the Repubblica metro station in Rome. According to one of the versions, the cause of the accident was the actions of the fans themselves, but they insist that this is not the case. 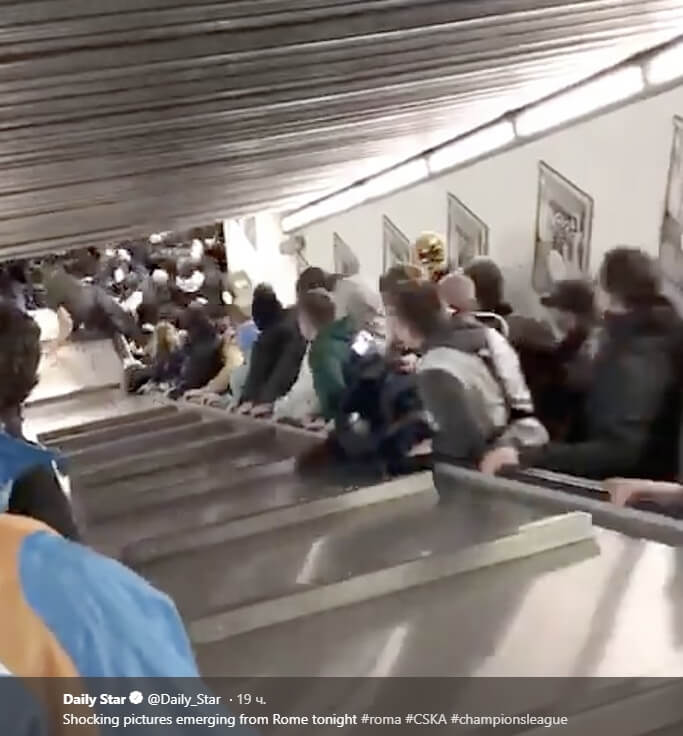 According to Air force, the incident took place the day before at about 19:00 local time, when the fans were heading to the Olympic Stadium in Rome for the CSKA match with “Roma”, which ended in the defeat of the army team with a score of 0: 3.

Charge d'affaires at the Russian Embassy in Italy, Maxim Burliai told RIA Novosti that 16 Russians were hospitalized, eight of them have already been discharged from hospitals.

“Several operations were performed during the night, and two more operations are currently being carried out. The condition of the victims is stable, ”Burlyai said. 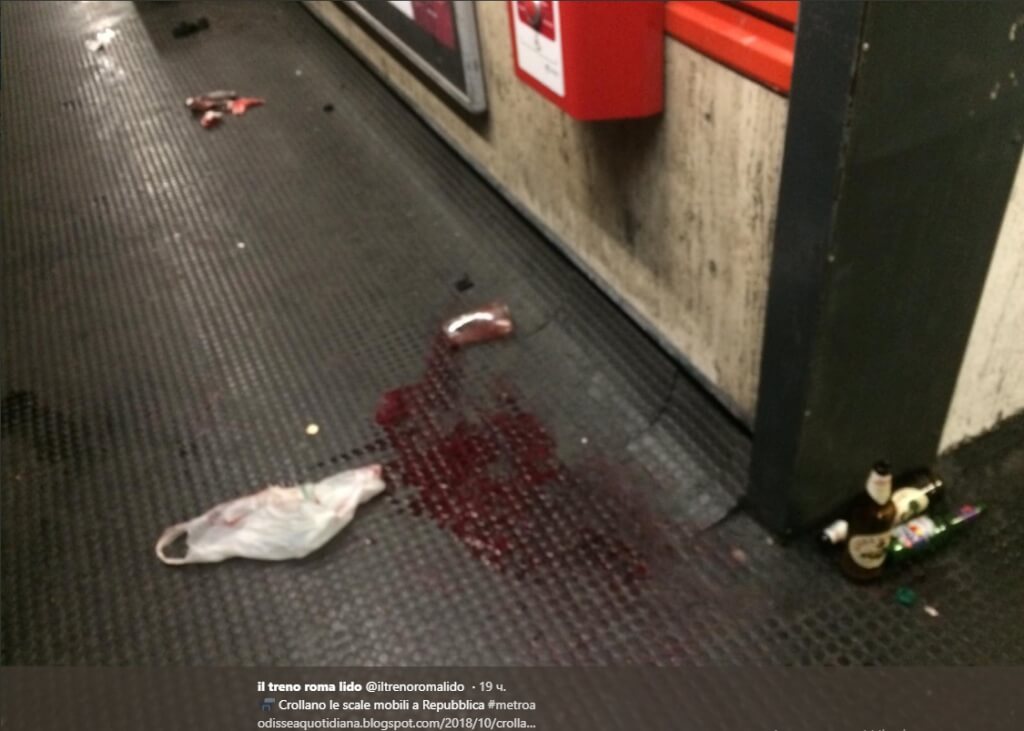 The Consular Service Department of the Ministry of Foreign Affairs of Ukraine confirmed that among the victims there are also Ukrainian citizens - four of them were hospitalized.

The prosecutor's office in Rome and the operator of the metropolitan metro launched an investigation into the incident. Station "Repubblika" is temporarily closed, trains pass it without stopping.

What happened to the escalator?

The video, which appeared in the Italian media, shows how the escalator suddenly accelerates sharply, and the fans crowded on it fall on each other.

In Rome before the match # RomaTSSKA at one of the central metro stations an escalator with fans has failed, there are serious injuries (c) pic.twitter.com/4hslg9ySBt

The photographs from the scene show that several of the lower steps of the escalator are completely destroyed. 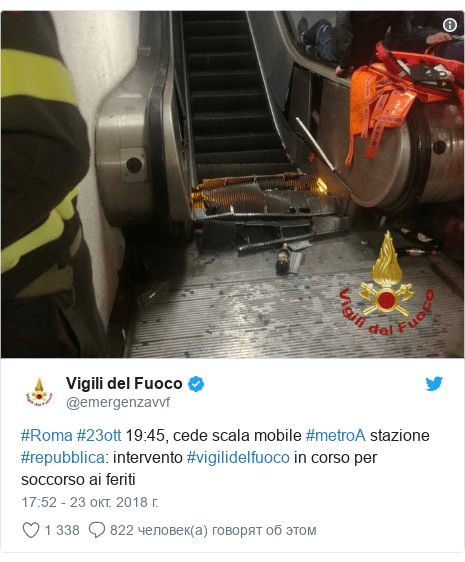 “I just saw a scene from the Apocalypse. One of the escalators working on the descent, one meter away from me, began to accelerate sharply, as if he had gone crazy, ”the newspaper Repubblica quotes an eyewitness of the event.

“There were a lot of people, they were jumping on top of each other. The escalator accelerated, and the guys did not manage to get off it, ”says another eyewitness.

As Repubblica notes, citing law enforcement agencies, the cause of the accident was most likely the behavior of fans, many of whom allegedly danced and sang on the steps of the escalator.

Interior Minister, Deputy Prime Minister of Italy Matteo Salvini commented on the incident in a rather drastic manner.

“It seems to me there were dozens of drunken pseudo-fans of the Russian team who were making a mess. And escalators are not made to be jumped on, ”Salvini said on RTL radio.

At the same time, Russian fans insist that there were no jumps on the escalator. 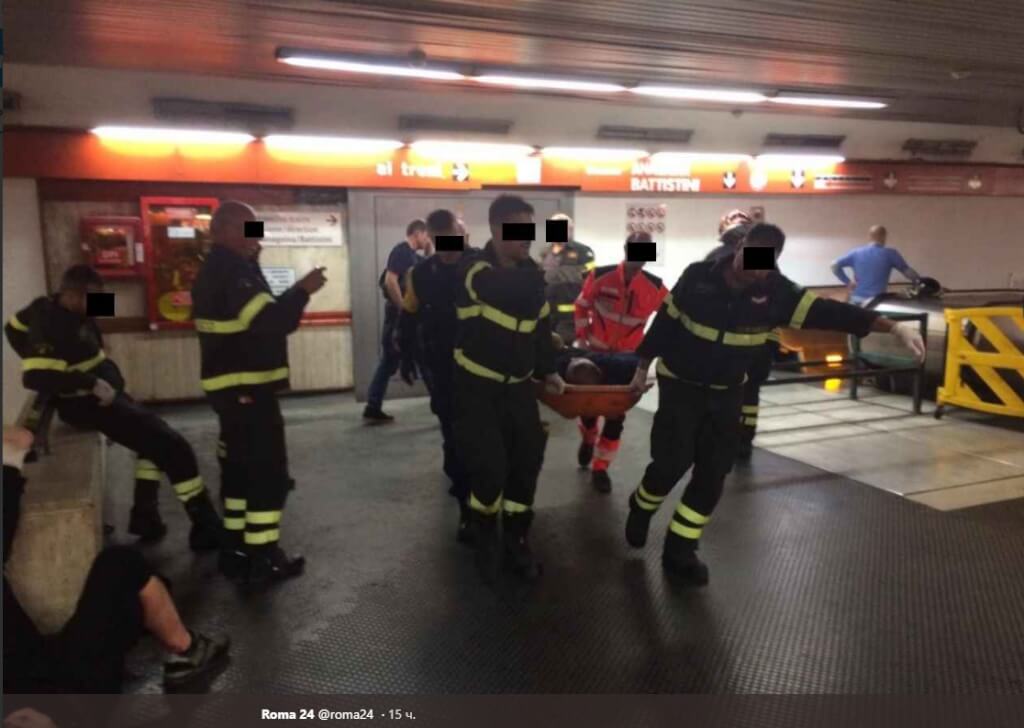 The fan, who was phoned by Russian commentator Vladimir Stognienko, said that they really sang on the escalator, but did not jump.

“We didn't jump,” another Russian woman on the escalator told ANSA.

The Russian embassy in Rome insists that all hospitalized fans were sober. The victims, who refused to be hospitalized, but turned to the embassy, ​​also "seemed sober" to the diplomats.

An employee of the transport company Atac told the Messaggero publication that the escalators in the Roman metro undergo a thorough monthly check.

“The technical life of the escalator is about 30 years, and the escalator at the Repubblica station is relatively new, less than 10 years old,” he notes.

Another employee of the company told the publication that during 40 years of work in the public transport of Rome, he had never seen such incidents.

The newspaper also cites a document according to which Atac has repeatedly asked the city authorities over the past three years to allocate funds for the unscheduled repair of equipment on line A, where the Repubblica station is located, and on line B. However, according to the newspaper, these requests were left unattended.

Sports commentator Vladimir Stognienko wrote on Twitter that the victims allegedly had to wait for an ambulance for a long time. 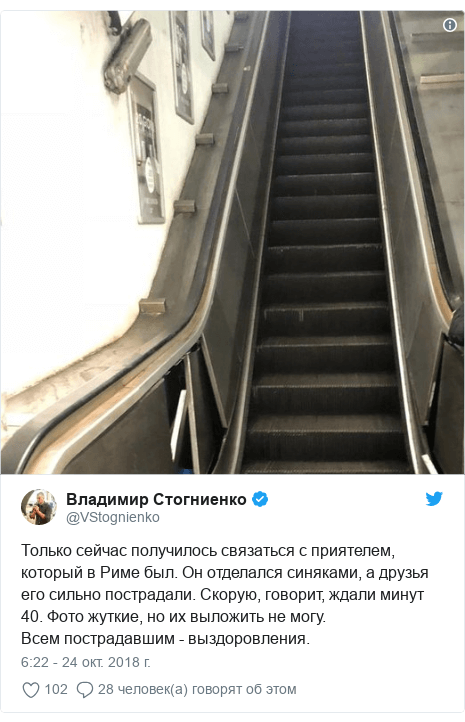 One of the eyewitnesses also told RIA Novosti that the wounded were not immediately given the necessary assistance.

“Metro employees did nothing, we told them that people were covered in blood below, and they told us:“ We know, we know ”. And then the police came running with truncheons, not understanding the situation, started yelling in Italian and using force against the fans who were not injured, ”he said. 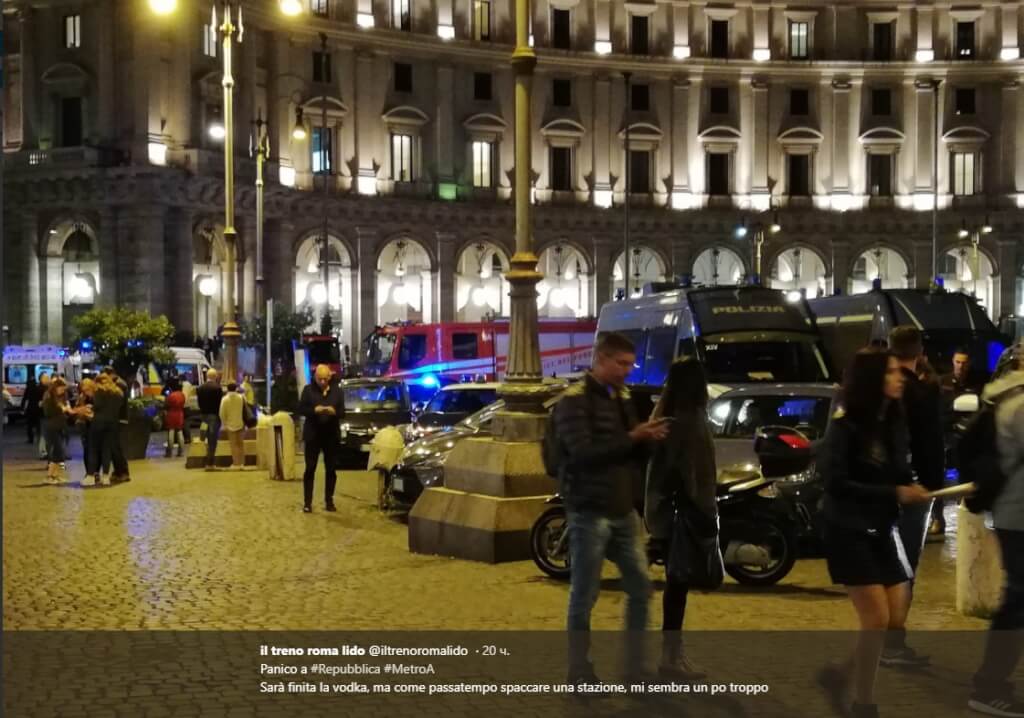 “For my part, I would like to convey through you words of gratitude to the mayor of Rome and the medical staff who provide assistance to Russian football fans,” he said.

Italian media also report that clashes between CSKA and Roma fans took place near the Olympic Stadium before the match. There were reports that one of the CSKA fans was stabbed, but later the Russian embassy said that this was not the case.

One of the fans, in a conversation with Komsomolskaya Pravda, said that the Italian fans were allegedly the first to attack the Russians in revenge for the fact that CSKA's ultras had previously destroyed the Roma fan bar.

“The path to the stadium goes through a rather dark park. And there they were waiting for ours. Single fans were pulled out. The Italian fans were armed with knives. I saw how the ambulances then took away the guys with stabbers, the asphalt in some places was covered in blood, ”he said.

The Russian embassy explained that information about stab wounds was not confirmed, and the person who was considered to have received such a wound, eventually went to the stadium to watch the match.

According to the newspaper "Soviet Sport", after the match, CSKA fans were detained for some time on the podium in order to avoid new clashes with Italian fans. In total, the match was attended by about 46 thousand fans.