Renat Davletgildeyev, the journalist of the Present Time publication, who publicly announced the harassment of LDPR leader Vladimir Zhirinovsky, revealed the details of the incident. 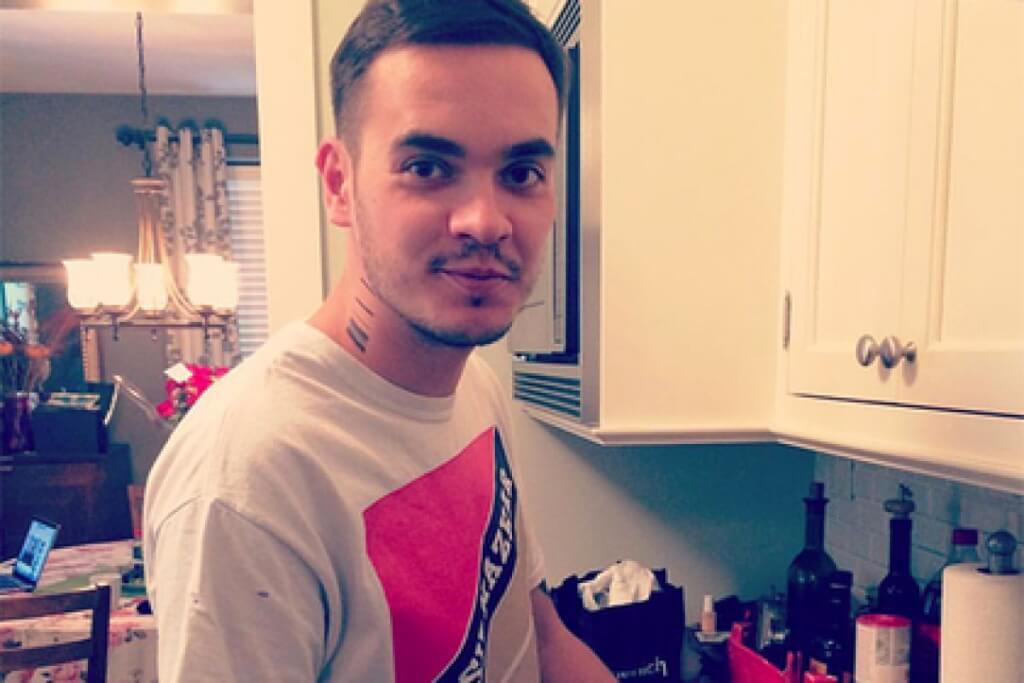 A wave of accusations of harassment came to Vladimir Zhirinovsky. Renat Davletgildeyev, the journalist of the Present-time publication, said that the permanent leader of the Liberal Democratic Party was molested by him. Homosexual published a corresponding post in social networks. He writes about it Lenta.ru report.


According to him, he took an interview with the politician in 2006, in Gostiny Dvor, where the Miss Russia contest was held. “I, a young boy, a journalist, a sucker, take a comment from Zhirinovsky, just catching him in the foyer, he touches me with his hands, rather intrusively,” said the journalist.

“Then the assistants of [the leader of the Liberal Democratic Party] come up to me and, picking up their hands, offer to go with them to the sauna. I am rather frightened of something mumbling and running into the hall to the people, ”he continued. The young man ended up not going anywhere. “[They] did not even drag me to the car,” he noted.

Davletgildeev explained why he didn’t do anything after this incident. “Because then there wasn’t such a public discussion about harassment, plus [I experienced] a moment of awareness of my own homosexuality and attempts to hide it,” said the journalist.

Davletgildeyev, openly gay, publicly declared harassment from Zhirinovsky in his Facebook. He also hinted at other similar incidents involving members of the Liberal Democratic Party of Russia and "dozens of deputies," who "prefer to take the boys to the special police." 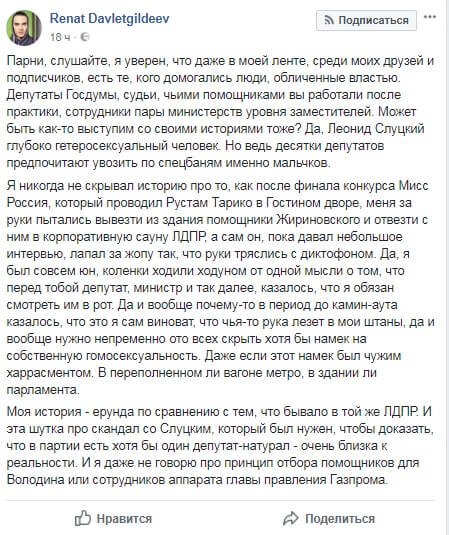 The reaction in the party LDPR

The Deputy Speaker of the State Duma from the LDPR faction, Igor Lebedev, called slander and insult to the journalist's message.

“Naturally, this is slander! Another message from a representative of an information resource that is incomprehensible to us, addressed to a well-known politician and deputy of the State Duma, which again is an unfounded accusation. I regard this as an insult to the entire faction. If he said this to me in the yard on the street, I would have kicked him in the face immediately and without talking, "Lebedev said. TASS Thursday.

At the same time, he assured that all retaliatory measures will be taken in the legal plane and that in the near future the Liberal Democratic Party of Russia "will consult what legal steps to take so that a person who slandered the party leader is punished for this."

On Wednesday, March 21, the State Duma Ethics Commission examined journalists’s complaints about deputy behavior Leonid Slutsky. Following the meetings with the Air Force correspondent Farida Rustamova and Dozhd’s producer Darya Zhuk, who openly reported harassment by the parliamentarian, the commission declared Slutsky’s behavior acceptable. After this decision of the commission, many publications have announced a boycott of Slutsky.

2017's most expensive scandals of the year