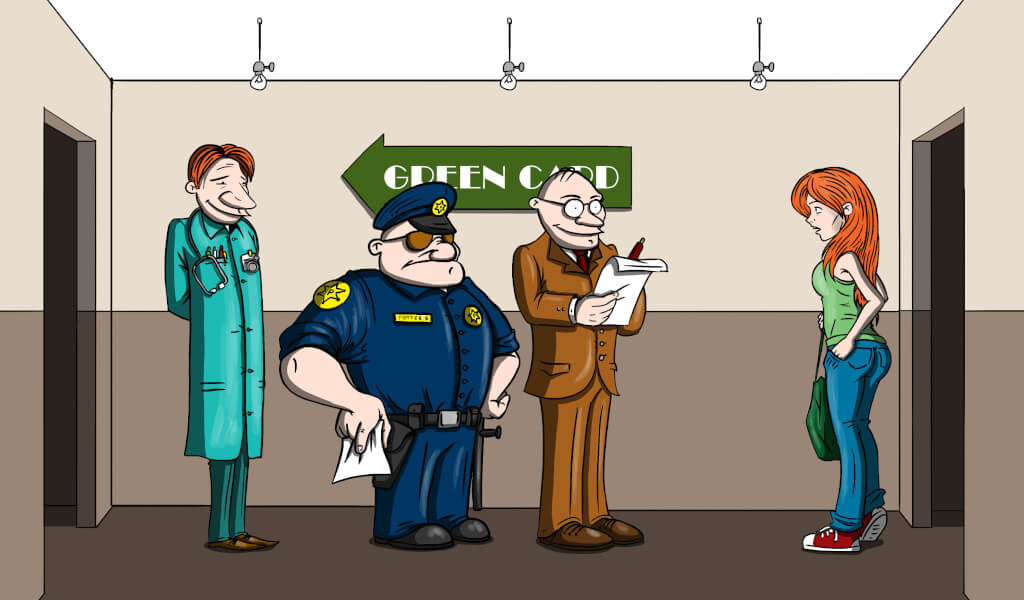 Before you get a green card, it remains to undergo several formal procedures. At this seemingly simple final stage, mistakes can spoil all previous efforts (See our 10 series of honest ways to stay in the USA.). If fingerprinting is a simple matter for a law-abiding person, then at an interview with an immigration officer, it happens that the strongest of applicants are being filled up. All other things being equal, the medical board may cost 75 dollars, or maybe a thousand. “Forum” figured out how to quickly and painlessly go through the last formalities on the road to legalization in the United States.

Where: the nearest doctor can be found at Online immigration service.

How long: two to ten days.

Medical examinations and immunization records are a must for submitting a petition to the green card. The main medical certificate is a form I-693 (Medical Examination of Aliens Seeking Adjustment of Status). In addition, you will need information about vaccinations. Certificates must be authorized and signed by a doctor, USCIS approved, they must be served in a sealed envelope.

Those who are served from abroad need to undergo a medical examination at home and find a clinic approved by the US Department of State.

The procedure is simple. Price depends on the clinic. The Immigration Service (USCIS) reports that it does not control the price of a medical examination. Therefore, if you want to save money, you should call several clinics.

The doctor must confirm that there are vaccinations against such diseases as: diphtheria, tetanus, whooping cough, polio, measles, mumps, rubella, hepatitis A, hepatitis B, meningococcus, smallpox, pneumococcus, influenza. If there are no references, they can believe the word.

In the case, if you have insurance, vaccinations are likely to make, and they will cost a tidy sum. In the clinic Madison Medical Practice in Manhattan, an authorized State Department, the Russian-speaking staff told us that the doctor individually decides which vaccinations the patient needs depending on the age and history of the disease. However, according to an immigration lawyer Evgenia Melzerand “to avoid unnecessary vaccinations, you can provide certificates about it from your clinic or from your doctor with translation into English”.

Among the mandatory checks here is the Mantoux test (test for tuberculosis). If everything is not going smoothly, you will need to have a chest x-ray, an analysis of syphilis and a general physical examination.

The average check for a test in this clinic in New York, on condition of perfect health, will cost $ 375. In the Metropolitan Center Medical Group clinic on the outskirts of Los Angeles, specializing in Hispanic clients, price starts from $ 75.

In general, the procedure is as follows: select a clinic, print out and fill in the I-693 form (but do not sign until you are instructed), bring to the clinic, undergo an examination.

After the Mantoux test and vaccination, pick up the envelope from the doctor, send it to the immigration service. It is important not to open the envelope, otherwise you will have to go through the procedure again. Results are considered valid for three months.

Where: the invitation is always the address, but you can come to another (addresses here).

How long: one hour.

Two or three months after the medical board will receive an invitation to surrender fingerprints. This procedure applies to all applicants from 14 to 79 years. The letter will include: address, date and time. It is necessary to take a passport for travel, the original of the invitation.

In addition to the prints, you will still be photographed, and this photo will be on the green card, so it will not hurt to put yourself in order and dress decently.

Getting a work permit

Where: will come by mail.

How long: about three months after application.

You can apply for a work permit along with sending a petition to the green card. You just need to fill out the form. I-765 Application For Emplayment Authorization on the immigration website and pay. Permission must come within three months. Then you need to issue a social security number and you can pay taxes. It should be understood that the green card itself implies a work permit - so if it already exists, do not ask for it separately.

In rare cases, the resolution takes longer, and the procedure may take more than three months, but this is rather the exception.

In any case, you need to get a social security number (SSN). It will take another couple of weeks. Read more about the number of social insurance in the previous becomee.

Where: at the official invitation to interview.

How much is: at no extra charge.

How long: an hour or two hours.

Interview scares many and enters into a stupor. An invitation for an interview at an immigration office usually comes within a month after receiving a work permit. It is necessary to have the original invitation, passport and a list of all necessary documents specified in the invitation.

The immigration officer usually conducts interviews in a very strict manner. Often questions are aimed at revealing lies. “The officer’s task is to find out all the details of the case, check your qualifications and documentation, and make sure that you don’t give false testimony,” says lawyer Maltsev.

According to him, it is believed that the interviewing officers are good psychologists, so it’s better to concentrate and respond carefully, not giving in to tricks.

Some pass the interview very easily. Vitaly Zinchenko’s wife won a green card at forty years old (this was ten years ago), coming from Israel. Vitaly says that you should not worry about the interview. “I don’t have much English, but I was pleasantly surprised that not only no one poured me, but even helped, explained words that I didn’t understand,” Zinchenko recalls. He successfully went to the next interview and is now awaiting American citizenship.

Krymchanka Natalia Trembez, who now lives in Oregon, on the contrary, had to sweat. “I had a strict interview with tricky questions and details. Her husband's favorite things, to the extent that she uses toothpaste. He was asked to sit aside and not help me. This is due to the fact that I spent almost a year and a half not in America, but in my homeland. But they believed me, ”recalls the happy owner of the green card.

Waiting for a green card

Two weeks after the interview, wait for a green card in the mail.

It is important to remember that while you are waiting for documents (usually six to nine months), it is undesirable to leave the country. After receiving a green card in the immigration service, it is advised to study rules for new immigrants.

It describes in detail the rights and obligations of a permanent resident of the United States, as well as useful information: where to go for legal assistance, where to get an education, what you need to know about the country, how to find housing and work.

Also read on the official website of the immigration service, how to pass on the right, where to find the nearest English courses and other useful information for newcomers.

Come to our immigration groupwhere you can ask for advice and share your experience - we are already five thousand people.