Home At home Post-election protests in Belarus: many wounded, over 100 arrested

Post-election protests in Belarus: many wounded, over 100 arrested

In Belarus, on Sunday, August 9, the presidential elections were held, which were initially accompanied by massive protests of people who disagreed with the policies of the current President Alexander Lukashenko, who has been ruling the country for 26 years. After the announcement of the results, protests erupted with renewed vigor, many disagree and doubt their veracity. Writes about it with the BBC. 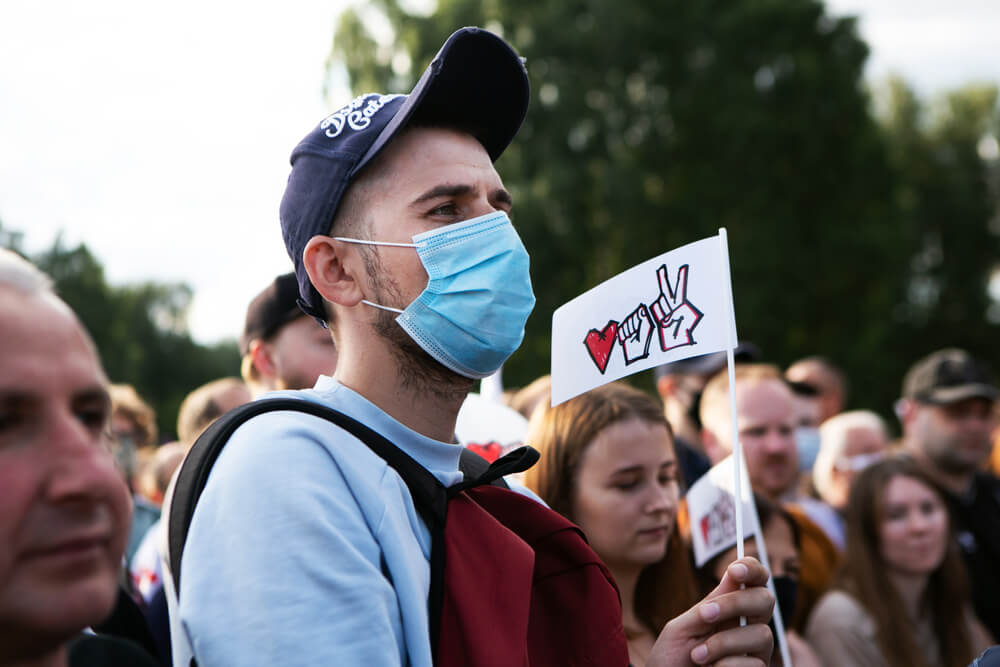 Lukashenko's main rival was Svetlana Tikhanovskaya, the wife of the arrested blogger Sergei Tikhanovsky, who was going to run for president before his arrest.

According to official exit polls, Lukashenka won the election with 79,7% of the vote, while Tihanovskaya received 6,8%. The turnout was 84,05%.

The opposition organized an alternative vote count on the Internet platform "Golos", which showed exactly the opposite result - more than 80% of votes for Tikhanovskaya.

The Central Election Commission (CEC) of Belarus, which had previously warned the opposition about the illegality of conducting alternative counts, promised to submit the first official data on the results on Monday night, August 10, but then postponed the announcement until morning.

Immediately after the completion of the voting, opponents of the current government took to the streets of Minsk and other cities. Protests in the Belarusian capital escalated into clashes and turned into harsh arrests.

Polling stations opened at 08:00 on the territory of Belarus and abroad. Long queues lined up at many polling stations - for example, they could be observed at the Belarusian embassies in Moscow and London, as well as in the republic itself.

Many did not have time to vote before the polling stations closed at 20:00 and continued to demand that they be allowed to cast their vote.

The head of the Central Election Commission of Belarus, Lidia Yermoshina, explained the long queues at the polling stations “as a result of provocation” of the protest electorate and stated that their work would not be extended. However, some sites were reported to continue working after 20:00.

The current president, Alexander Lukashenko, voted at the University of Physical Education, after which he spoke to journalists and attacked his main rival Svetlana Tikhanovskaya, as well as the independent press.

“I do not consider this person to be the main competitor, it was you who made her the main competitor. She sincerely admits that she does not understand where she got to and what to do, ”he said and criticized the program of his rival.

Tikhanovskaya voted at a polling station in a school on the eastern outskirts of Minsk. Hundreds of her supporters gathered near the site greeted her with a thunderous ovation.

At that time, military and special equipment were gathered in the center of Minsk in case of unrest, and the city was actually blocked - the entrance to it was strictly controlled by the military.

There were also reports of problems with the Internet connection, which the authorities attributed to the growth of foreign traffic and "unprecedented DDoS attacks."

During the voting, dozens of people were detained, mainly observers and journalists. In Minsk, unidentified men in civilian clothes rudely detained journalists of the Dozhd TV channel who had come to cover the elections.

In the evening they got in touch, said that they had been released and were being taken to Smolensk. The Russian Foreign Ministry said that the journalists were detained for lack of accreditation.

Immediately after the closure of polling stations, people began to gather in the streets of Minsk and other cities who did not agree with the first results of the vote and opposed the policy of the current government. The authorities, represented by Lukashenka, had warned in the morning that they would severely suppress illegal actions.

This is exactly what happened: soon after people began to gather in different areas in the center of the Belarusian capital, the police began to apply to them the entire arsenal of special equipment that they had in their possession: water cannons, stun grenades, rubber bullets and other means.

Judging by the footage from the scene, some of the protesters were seriously injured: for example, one protester was torn apart by a foot, another was hit by a paddy wagon, which was trying to drive through the crowd (as a result of this incident, several more people were injured).

At first, the Ministry of Internal Affairs did not comment on the situation, but then admitted that the police were forced to use special means to establish order.

There are no official data on the victims, the Ministry of Health of Belarus promised to announce them on Monday morning, August 10, but the scale can be judged by dozens of ambulances that arrived in the center of Minsk after the clashes began.

At the same time, mobile Internet almost completely disappeared in the center of Minsk, and the sites of the country's largest media outlets and government agencies were unavailable. Interruptions in access to social networks and instant messengers were also reported.

After the riot police and internal troops managed to drive out the bulk of the protesters from the center, pinpoint detentions began. It was reported that even those who were in the courtyards and had no relation to the protests were detained.

The clashes lasted only a few hours and ended at about 02:00, after which the center of Minsk was empty. The Ministry of Internal Affairs reported that they had taken control of the situation, and footage of how some of the special equipment was leaving the city appeared on social networks.

The exact number of those detained at the protests remains unknown. According to the human rights center Viasna, which conducts an independent count, more than 100 people were detained on election day and after.

According to the edition ZN, there were reports of at least 50 injured and seriously wounded. The deceased is also reported. There is evidence that a young man was wounded by rubber bullets. His chest was torn: he is in a very serious condition in intensive care.

Alexander Lukashenko did not appear in public and did not make any statements since Sunday morning, August 9, when he was voting and talking to journalists.

Svetlana Tikhanovskaya addressed the protesters and security officials: “I want to ask the police and the troops to remember that they are part of the people. And ask your voters: prevent provocations, there is no need to give a reason to use violence against you. I know that Belarusians will wake up tomorrow in a new country, and I hope that tomorrow there will be only good news. Please stop the violence. First of all, officers, I know you can do it. ”

'We understand that you are scared': rallies in support of detainees in Belarus were held around the world

An invitation to a dream: how a scientist from Belarus came to the USA for a year and stayed forever