Home New York In Brooklyn, there was a fire in a Russian restaurant. VIDEO

In Brooklyn, there was a fire in a Russian restaurant. VIDEO

At about 22:00 on April 14, a fire broke out in the Russian restaurant Tatiana in Brighton Beach, New York. The fire that engulfed the building could not be extinguished for almost an hour and a half. 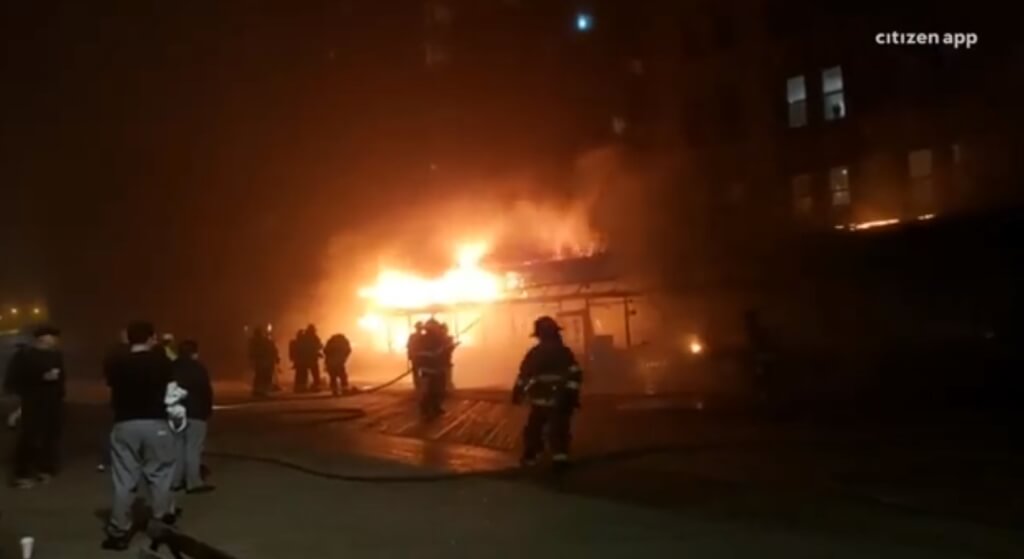 According to the website citizen.com, flames flared closer to 22: 00 in a building on the Brighton Beach promenade, where firefighters immediately went.

Around 22: 06, there were reports that one person died, and the police are considering a criminal arson.

At 22:15, the fire department received messages about the need for reinforcements - another calculation was sent. The fire was extinguished with two water cannons.

On the subject: In New York, the legendary Russian restaurant went bankrupt

The main part of the flame was extinguished pretty quickly - in about 25 minutes, but in general the restaurant burned for an hour and a half. At the same time, representatives of the authorities expressed doubts that the fire could be completely extinguished with the available firefighters. After 10-15 minutes, it was announced that the fire brigade at the scene would be sufficient to localize and eliminate the fire.

Around 23: 35 fire was extinguished. Officials reported that the news of the death of a person was false. At the scene no one was injured or killed.

The cause of the fire is still under investigation.

On the subject: New Laws of New York in Action: Why Restaurants Raise Prices and Dismiss Employees

On the the site of the restaurant "Tatiana" it is said:

“Restaurant“ Tatiana ”is named after the Odessa beauty Tatiana, who can often be seen in this exotic and grandiose establishment. The secret of Brighton Beach traditions is revealed before your eyes. I call it a meal with a special attitude. All of this is reminiscent of shots from the James Bond film From Russia with Love. It's Sex and the City mixed with Sleepless in Brighton Beach. "

Ladies, hold on to your husbands, and gentlemen, don't forget to shave, there will be many people here to impress. You don't need a red carpet invitation to see trendy urban flair and appeal that only celebrities have.

At first glance, you will plunge into a world of glamorous design, tasteful interiors, stunning furnishings and perfect lighting for your personal moments. One of the main advantages of "Tatiana" is its location. The restaurant is located on the waterfront with a breathtaking view of the Atlantic Ocean. ” 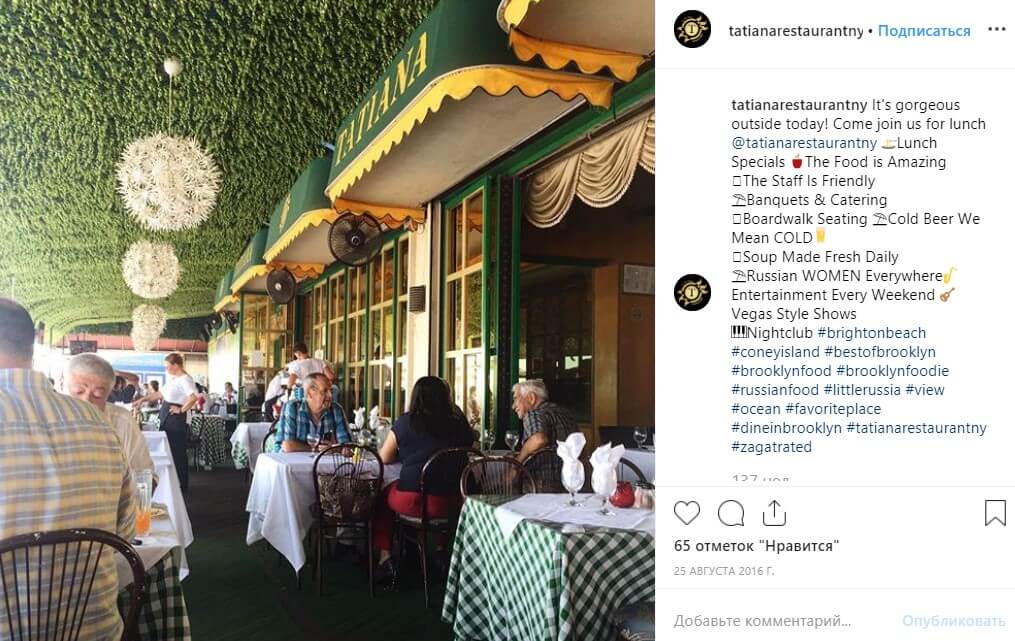 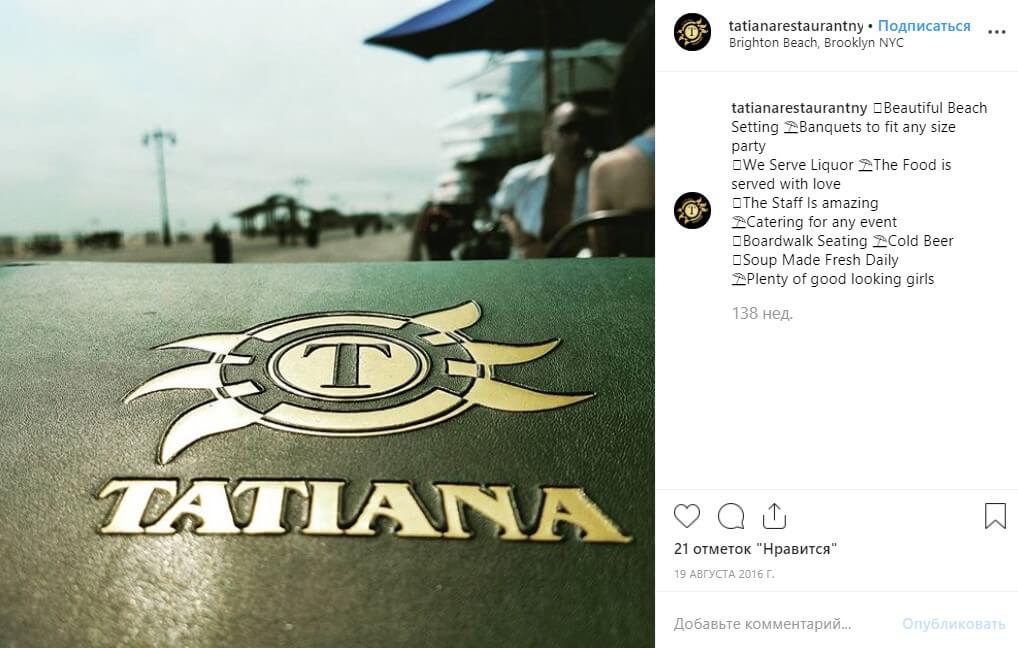 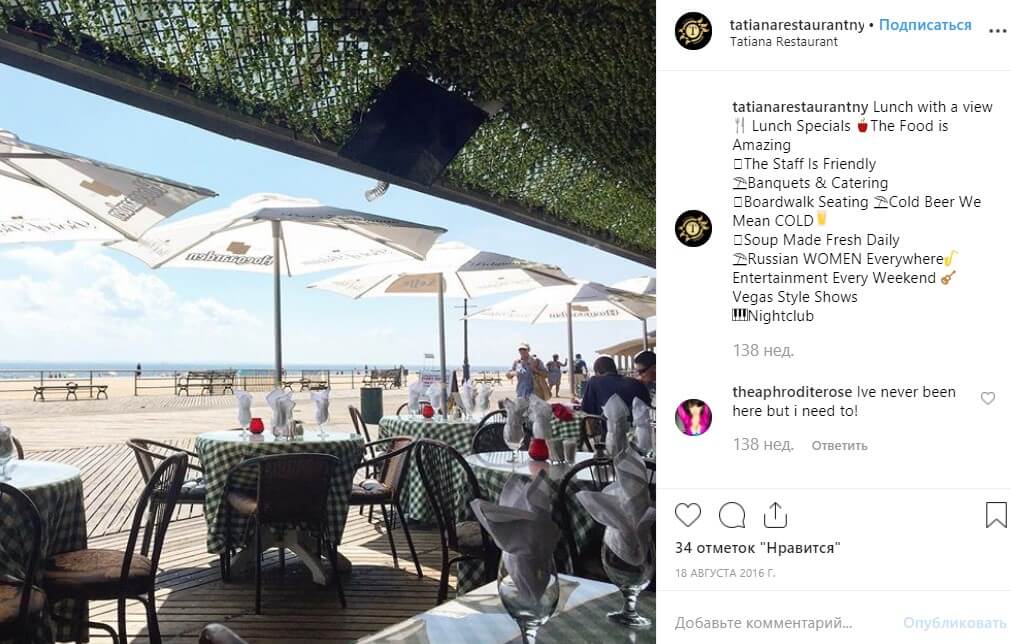 The restaurant belongs to the resident of Turkey Tyyane Bapzap and offers dishes of Russian and East European cuisine.

As a Russian guy lost a successful business in the US

Street in Brooklyn renamed in honor of immigrants from Odessa

'Without him, Russian New York will no longer be the same': the writer said what killed the 'Russian samovar'