Home In the U.S. A bright meteorite flashed in the night sky over the USA: report from social networks

A bright meteorite flashed in the night sky over the USA: report from social networks

A bright meteorite illuminated the night sky of the Midwestern United States and got on numerous videos of excited residents and video surveillance cameras. 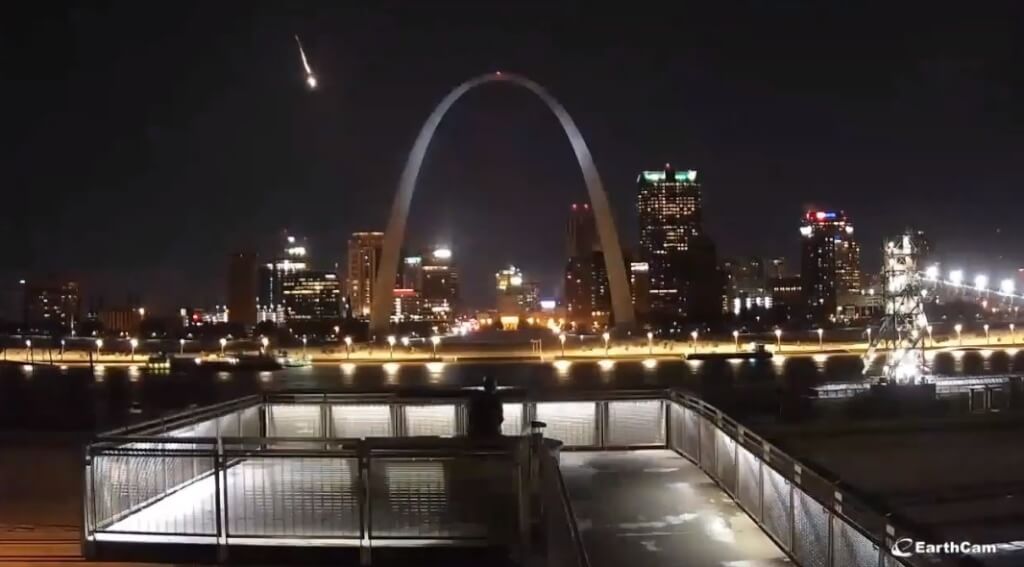 The American meteorite community says it received more than 120 messages from eight states from people who noticed the phenomenon on Monday night, reports TSN.

Most of the messages come from Missouri, but the meteorite was also reported by residents of Illinois, Kansas, Minnesota, Nevada, Nebraska, Oklahoma and Wisconsin.

On the subject: 10 times more powerful than Hiroshima: NASA told about the explosion of a meteorite in Kamchatka

Did anyone else see the #meteor just before 11pm tonight? !! I caught it looking west from my dash cam @ThePlazaKC! That's the Cheesecake Factory tower it looks like it almost hits even though I know its 50-75 miles high. pic.twitter.com/x7sCg6l0Hp

You never know what you will see with your @googlenest camera! #STL #meteor pic.twitter.com/1KeROpsbwZ

I was watching an @EarthCam camera from St. Louis, Missouri about 30 minutes ago and saw a #meteor! pic.twitter.com/PVAvIGlALF

A meteor lit up the sky over St. Louis, Missouri last night with reports hearing loud booms.
The Northern Taurid Meteor shower is nearing it's peak according to the American Meteor Society & is likely the source of the fireball.#meteor ☄#TuesdayThoughts pic.twitter.com/sEIrFEdJ6k

☄️FIREBALL IN THE SKY☄️ On patrol, a Sedalia, Missouri police officer captured a bright flash of blue in the Monday night sky on his dash camera. The fireball was a meteor crashing through the atmosphere. https://t.co/1GdkPvgP5s #meteor pic.twitter.com/NifaY7lb0N

As told in the meteorite community, it was a car - a meteorite that is brighter than Venus. This is a rather rare occurrence.

Its supposed trajectory ran from east to west, and a visible flight ended above North Carolina.

The appearance of the fireball occurred at the approximate peak of the Taurid meteor shower. This starfall is usually one of the weakest of the year.

Elon Musk wants to provide Earth with free Wi-Fi: he is accused of creating 'traffic jams' in space

Internet for the whole planet: what global satellite providers will change

'This is just the beginning': how long the California fire season will last