Home In the U.S. Russian woman who took her children out of the United States was given seven years in prison

In the US, the Russian woman Bogdana Osipova (Mobley) received seven years in prison on charges of kidnapping your own children and trying to extort money from their father. Russia calls the sentence inhuman. 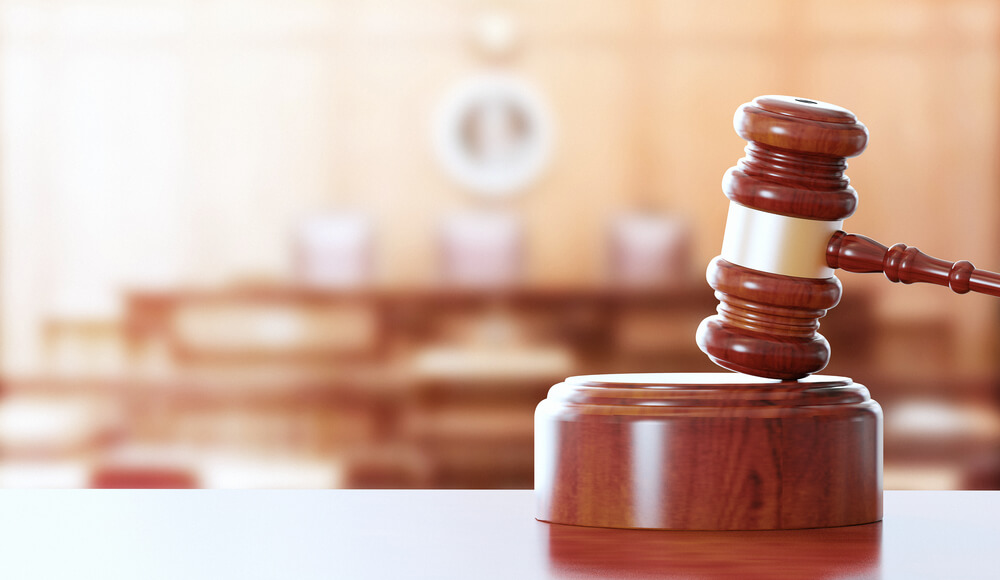 The Wichita Federal District Court (Kansas) sentenced 38-year-old citizen of Russia and the United States to 84 months in prison. A jury jury found her guilty back in March, and she was threatened with up to 43 years, writes Air force.

According to the prosecution, in 2014 Osipova left Kansas for Russia and took her daughter from her marriage to a local resident Brian Mobley and her eldest son from a previous relationship with her. At that moment, she was pregnant with their second joint child - the girl was born already in Russia, after which the couple divorced.

On the subject: How to save a marriage in immigration

By the time the Russian woman left the United States, the divorce proceedings were going on between the spouses, and the court established joint parental custody of the common daughter, writes The Wichita Eagle. Osipova, therefore, had no right to take her out of the country without her husband's consent. Later, a US court gave custody of both girls to Brian Mobley. The couple's daughters are still in Russia and live with their guardian - Bogdana Osipova's aunt, TASS reports.

According to the agency, Osipova returned to the US in September 2017, to resolve the issue of custody of children, but was arrested. She filed an application to the court, since she did not agree with the transfer of full custody to her father. The court set a date for the hearings, but two days later the FBI officers detained the Russian woman as part of the criminal case filed by the former spouse.

During the trial, Osipova agreed to the return of younger children to the United States, counting on subsequent release, but the Russian court did not give permission for their removal abroad. According to the decision of the Russian court, the place of residence of the girls is determined in Russia, and the father is ordered to pay alimony.

The prosecution indicated that Osipova allowed her ex-husband to communicate with her eldest daughter until 2016, and then began to demand money for it, writes The Washington Post.

On the subject: Single mothers in the United States: how to survive and live

Former husband of Bogdana Osipova Brian Mobley created on Facebook groupdedicated to finding daughters. A document was published there in which the history of the conflict was set out from his position.

Osipova and Mobley began dating in February 2012, and in May the Russian woman became pregnant. In August, Mobley, a military man, was ordered to be transferred to an airbase in the vicinity of Wichita. In October, Osipova moved in with him with her son. In January 2013, Mobley and Osipova got married - three days after the birth of their first daughter.

And in March 2014, Mobley filed for divorce - for the second time - and the court then ruled on the spouses' temporary joint custody of the child. The first time happened in August 2013 - then Mobley left the common house, for which, however, he continued to pay.

According to this court decision, Bogdana Osipova should have stayed in their joint home. In addition, Mobley paid her 727 dollars a month for the maintenance of the child.

On the subject: About Russians in America

Osipova in court said that she had no support from the family, but Mobli said that her mother and stepfather live in New York, and her mother did not work and regularly visited her in Kansas.

According to Mobley, Osipova did not want to file a divorce and was hiding from bailiffs. When they finally managed to hand over the necessary documents to her, she threatened her husband that she would take the children to Russia if he did not refuse the divorce. He reported this to his lawyer, who contacted Osipova’s lawyer and warned about the inadmissibility of such actions. After that, Osipova left for Russia, taking her daughter with her.

The Consulate General of Russia in Houston called the sentence Bogdan Osipova unfair and inhuman. 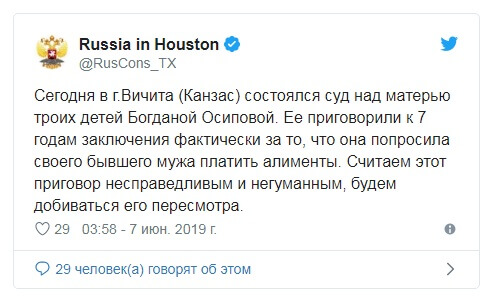 “The case of BA Osipova is yet another case of gross violation of the rights of Russian citizens by the US authorities,” the consulate added.

According to TASS, Russian Foreign Minister Sergei Lavrov expressed concern about Osipova’s fate at a meeting with US Secretary of State Michael Pompeo in Sochi in May.

Personal experience: how I passed on the rights in America

How a doll from America saved a girl from Ukraine

How to move out of an apartment in America, not to pay fines