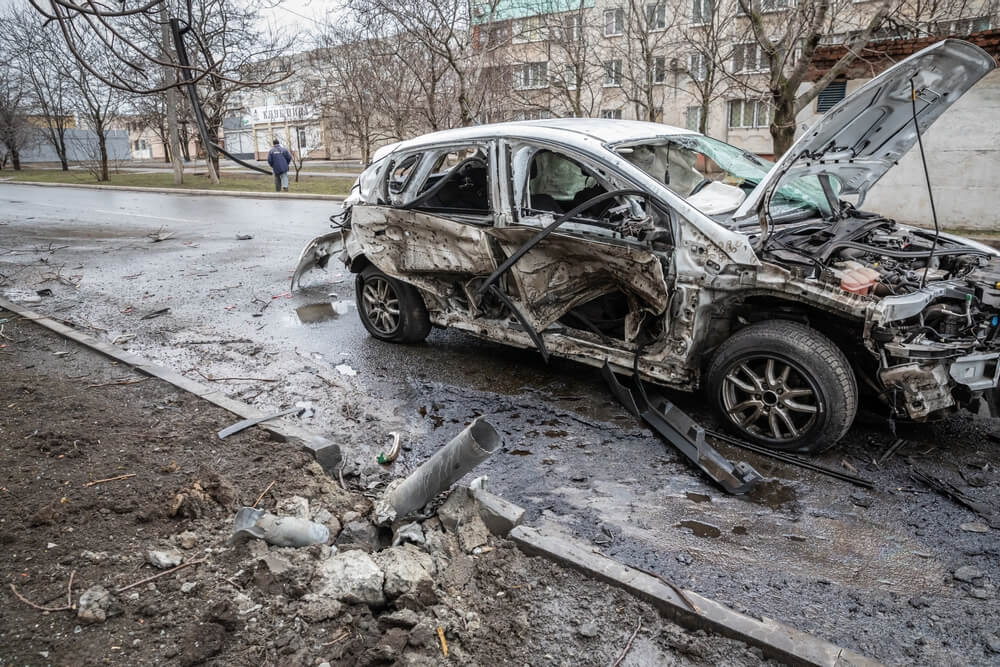 Dmitry Yurin was at home on March 16 when a Russian bomb hit the Mariupol Drama Theatre. His apartment on Mira Avenue was a couple of hundred meters across the square with the fountain. The theater has turned into a large bomb shelter. Hundreds of women and children were inside.

“It was terrible: a powerful huge explosion. I heard screams, strong screams,” Yurin said. “I saw bodies and body parts. I pulled out one woman, then a girl, then a boy. All were wounded. The boy's legs didn't move. He shouted. My hands were trembling. I was covered in blood."

“A woman lay motionless next to me. Family members desperately tried to resuscitate her by pressing on her chest. They tried to bring her back. A child stood next to her and said: "Mom, don't sleep." The woman was dead,” Dmitry said.

On the subject: Mass executions, torture, rape: the Russian army staged a massacre in the suburbs of Kyiv

The exact number of people killed in the Russian airstrike is still unknown. Ukrainian President Volodymyr Zelensky announced the death of 300 people. Witnesses, including Yurin, confirm that there were dozens of bodies. It is said that the continuous shelling from Russia made the rescue work dangerous.

Yurin said that he returned to the garage, where he hid with his mother Nadezhda, lit a cigarette and took pills. He decided that he must leave Mariupol, which was attacked and besieged by Russian troops for two terrible weeks. The city was cut off on all sides.

He came up with an unusual plan. Yurin decided that he would swim to safety.

An avid fisherman, he spent hours on the Sea of ​​Azov with his father catching the local fish known as pelengas. He found his fishing boots, which used to be used for digging up worms. I took two garbage bags to tie around my socks, some rope and four 5 liter plastic bottles to use as watercraft.

According to Yurin, wearing this makeshift costume, he set off on foot to the beach. It was early evening. He passed by destroyed apartment buildings. “There were several people who were looking for water. Someone asked me for cigarettes. The city was deserted. I followed the familiar path to the sea. It was cold,” he recalls.

Yurin said he waded across the sand and then dived into the water. He swam 150 meters parallel to the shore and headed west. The water was ice cold.

“My teeth were chattering. I hid behind one of the bottles so no one could see me. Sometimes I rested on it, ”said Dmitry.

He swam for two and a half hours. The route, 4 km long, ran past the Russian positions in Rybatsky and to the village of Melekino, which was a seaside resort before the war. He was very tired and went ashore. He found an elderly couple who received him, gave him a glass of vodka and a bowl of borscht.

The village was under Russian occupation. With the help of a neighbor, Yurin managed to get into a minibus bound for the port of Berdyansk, also occupied by Russian troops. He said the Russian soldiers at the checkpoint ignored him. “They were 17 or 18 years old,” he recalled. From Berdyansk, he was able to get into the territory under the control of Ukraine.

Diana Berg, a resident of Mariupol who fled the city, said the family traveled the same route as Yurin. “Because the beach was mined, they had to walk several kilometers through cold water,” she wrote on Facebook. It was now impossible to leave on foot through the Russian positions.

“They don’t let anyone in or out,” she wrote.

She added: “The city is still on lockdown. Every day the Russians destroy it with all possible means - air strikes, rockets, artillery, mines, tanks. In just one day, 118 air bombs were dropped. We thought the city had already been destroyed. But now it's crumbling even more."

According to her, the Ukrainian army and its allied Azov battalion control the shrinking territory in the center of Mariupol. “Civilians are trying to survive in this hell. This terror is beyond imagination,” she wrote, calling for a ceasefire and an evacuation organized by the international community.

Authorities in Kyiv have accused Moscow of kidnapping thousands of Mariupol residents, including children. They were forcibly taken from City Hospital No. XNUMX to Russia through neighboring areas controlled by pro-Russian separatists. A video has surfaced showing soldiers deporting doctors and patients at gunpoint from a city hospital.

Residents of Mariupol were forcibly deported to the temporarily occupied territory of Ukraine. Armed men came to the city hospital and in an ultimatum said that doctors and patients should get out and get on the occupiers' vehicles. pic.twitter.com/O21Twv4NEO

The Mariupol city council says separatists are now driving through the ruins in a white van, picking up bodies lying on the streets. They are burned in a mobile crematorium. The goal, he said, is to avoid embarrassing photographs from Bucha, northwest of Kyiv, of executed and bound civilians.

Another resident of Mariupol, Vika Dubovitskaya, said that she managed to escape with her two children - six-year-old Artem and two-year-old Nastya - in a private car. They took refuge in the drama theater when the building was destroyed. “It was quiet. Then there was an explosion. We had to run,” she said.

“I put my daughter on my shoulders and grabbed my son by the hand. He told me, "I'm tired of running." The explosion threw me against the wall. I hurt one side of my face, but I didn't notice. It was adrenaline. My only thought was to get the kids out,” the woman says.

Dubovitskaya said that 1500 people lived in the theater. She000000000000000000,1 arrived here on March 5 after gas, heat, water and electricity were cut off in the city. One of the actors, Damir Sukhov, showed her a place to spend the night on the ground floor.

“We lived in a corridor between classical columns. There were thick walls,” she said. “Other women and children were already sleeping in the auditorium, as well as in the dressing room and in two underground basements,” she said.
According to her, it was warmer on stage, but more unsafe.

There was nothing to eat for the first three days. "You feel guilty when you can't feed your children," she said.

The Ukrainian military then brought food, including frozen fish, which was cooked outside the building on wood fires. Only children were allowed to eat. According to her, the volunteers ransacked the store and brought warm clothes.

Dubovitskaya said the Russians knew the theater was full of women and children. They took over the surrounding areas and one night secretly infiltrated a Pumb bank branch, 250 meters away. The Ukrainian Armed Forces painted the word "children" in giant letters outside the theater.

She later moved to the second floor and was in the projection room when the bomb fell. It was unclear how many people died or what happened to the actor Sukhov, who organized the rescue efforts. On March 23, she met her husband Dimitri, who had returned from Poland to look for her and found her in a Red Cross camp.

“There was no communication in the city. I left my phone and backpack when we ran out of the theater,” she said. - Dima came to the school near Mariupol, where we lived. He saw our son first, but did not recognize him because he had lost a lot of weight.” The family now lives in a basement in Lvov, along with 25 other refugees.

Meanwhile, Yurin revealed that his mother, who worked as a cleaner for the Mariupol newspaper Priazovie, managed to escape a few days after his epic swim in the Sea of ​​Azov. Now she is staying with her sister in Russian-occupied Berdyansk.

“What the Russians did to the theater was an act of terror,” he said. “They knew there were civilians inside. They killed hundreds. It was the same story when the maternity hospital was bombed.”

“I am 31 years old, I am combat-ready. If they had captured me, I would have been tortured and taken prisoner,” he said. – Thank God, I knew the coastline around Mariupol so well. It saved me."

Both legs are crippled: an American journalist miraculously got out from under Russian shelling in Ukraine

In Russia, a man was detained and fined for quoting Putin's words about the war