Home At home Ukrainians saw Banksy: they are the first to catch the mysterious artist at work

Ukrainians saw Banksy: they are the first to catch the mysterious artist at work

Ukrainians were the first to catch the legendary British street artist Banksy at work in the Kyiv region. A man working with stencils was seen by the townspeople, reports TSN. 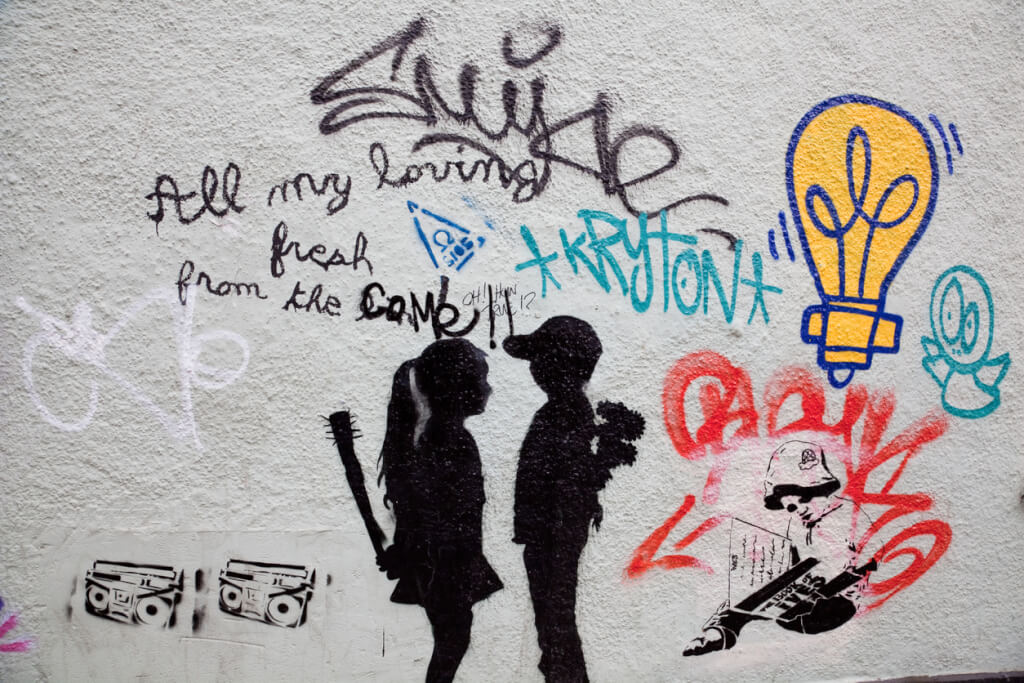 Rumors about his possible arrival spread for several days in a row. Since then, graffiti in his characteristic style began to appear massively in Ukrainian cities. In the end, Banksy himself confirmed his arrival in Ukraine by posting one of his works in the ruined Borodyanka on social networks.

On the subject: Ukraine revoked accreditation of CNN and Sky News journalists for reporting from Kherson

On the wall of the destroyed house, he painted a gymnast girl standing on her hands, leaning on the ruins. At the same time, several more works appeared in the Kyiv region, very similar to the works of Banksy. This is a drawing with a kind of allegory for Putin - a little boy overturns a man in a kimono with a black belt on his back, as you know, this is the sport that the Kremlin leader loves.

But in Kyiv, children are depicted right on the anti-tank hedgehog. It is worth noting that the gymnast from Borodyanka is the first confirmed work of Banksy this year. The British street artist, who prefers to remain anonymous, often draws on high-profile themes and in high-profile places.

But this time he was not so careful and there were witnesses who watched the work of the artist. Journalists managed to find people who saw this most mysterious artist of the twentieth century. They say it looked like no one was hiding what they were doing, but just in broad daylight a minibus arrived, several people got out of it and set to work.

They were in overalls and took some measurements, so they were perceived as local architects. But at last one of the men very quickly began to stencil a drawing of a gymnast with spray paints.

Witnesses say that the man looked to be under 50 years old, had a beard, but they could not even think that they were watching one of the most mysterious people in the world.

Banksy is the pseudonym of a British artist who hides his real name and identity, he is the most successful street artist in the world. Despite some allegedly known biographical data on the origin and age of Banksy, with some degree of certainty, we can only talk about his creations. DW.

Over the past two decades, the street artist, who drew attention to himself with ironic graphic commentary on the topic of the day and categorically refuses to become part of the art establishment, has nevertheless become an important person in the world of contemporary art. For many, even the rightful successor to 1960s “revolutionaries” Andy Warhol and the Velvet Underground. In 2010, the mysterious “phenomenon” created even more haze around his mysterious identity with his directorial work “Exit Through the Gift Shop,” disguised as a documentary about street artists and about Banksy himself.

Graffiti by Banksy became famous all over the world. His monkeys and rats protest against wars, capitalism and the establishment, denounce racism and police violence, express solidarity with refugees, thank the unknown heroes of the fight against the coronavirus pandemic and help not go crazy in quarantine.

The commercial hype around Banksy culminated in October 2019, when the painting “Devolved parliament” went under the hammer for $11 million. This is seven times less than the current record price for a work by a living artist, but five times more than its original estimate.

An Iranian who lived there for 18 years died at the Paris airport: he inspired Spielberg's film 'Terminal'

Bill Gates car collection: what cars are in the garage of one of the richest people on the planet

In Russia, they stopped issuing 10-year passports with chips

Personal experience: I was a surrogate mother for children of celebrities, and I was amazed by many things

Russian oligarchs buy real estate in the US to bypass sanctions: for this they use 'black' schemes

Ten Benefits of a Costco Membership You May Not Know About