Home In the U.S. The third anniversary of the tragedy at Sandy Hook: statistics worsen

The third anniversary of the tragedy at Sandy Hook: statistics worsen

December 14 is three years old since the massacre of Sandy Hook Elementary School students in Newtown, Connecticut. The hands of 20-year-old Adam Lanza, who committed the massacre, killed 27 people, including 20 children.

Since then by according to NBC News, in America, every two days children under 12 die from weapons. The channel's analysts estimate that at least 555 children have been killed - either intentionally or inadvertently - over the past three years.

The true number of dead children may be even greater, since, for example, information about suicides does not always appear in the media, according to the NBC.

Be that as it may, similar statistics indicate that no improvement in performance after tragedy at Sandy Hook not visible. In addition, one of the latest government surveys reported that the threat of a child dying from weapons has increased slightly since then.

Various massacres continue to be in the headlines of American publications. “Forum” also told a story about planned terrorist attack in a Minnesota schoolwhich was prevented.

Portal Vox.com recalls that after the "Sandy Hook" at least a thousand times when shooting in the United States killed four or more people at the same time. And over the past year, on average, there has been gunfire every day in America. The most resonant massacres of 2015 - in Oregon и San bernardino.

However, what happened in Connecticut in 2012, is still thorny in the hearts of millions of Americans, as a turning point in the debate on arms in the United States.

The United States is one of the few countries in the world in which the right to bear arms is protected by the constitution, but because of the easy access to firearms, there are six times more murders in America than in Canada and 15 times as many as in Germany.

From 2001 to 2013 years from weapons, reportedly more US citizens diedthan from the wars in Afghanistan and Iraq, AIDS, drug overdose and terrorism combined. 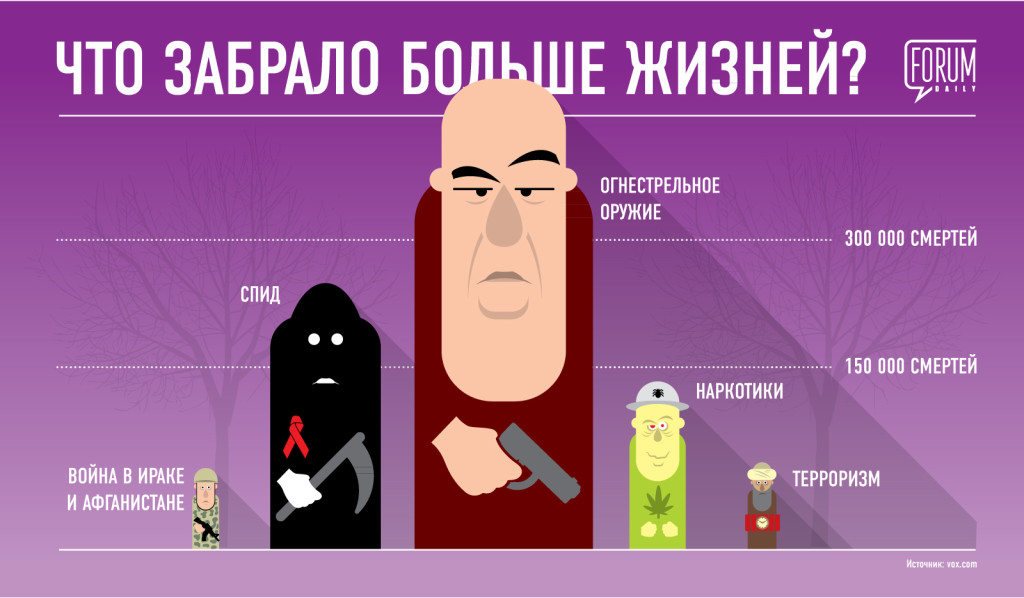