Home Page Educational program Top 15 cleanest lakes in the United States, after which you will not want to swim in the ocean

When it comes to breathtaking bodies of water, the United States certainly deserves the lead. Across the United States, you'll find some of the most pristine lakes on the planet. The real special is that these crystal clear lakes are landlocked and in amazing locations. About 15 such lakes told the publication Only in Your State. 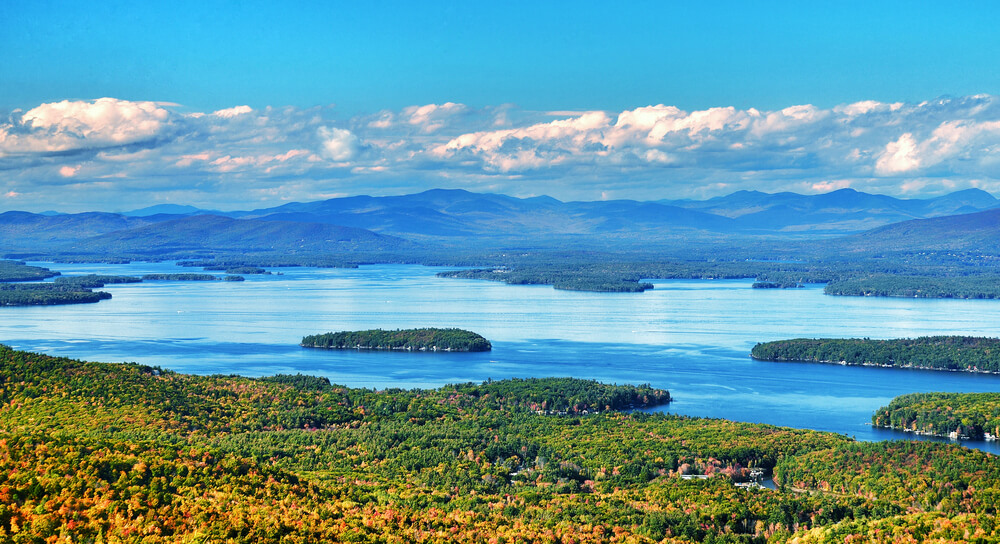 Lake George, known as the "Queen of the American Lakes," is 32 miles (51 km) long and is fed by underground springs that give the lake crystal clear water. Lake George, located in the southeast of the Adirondack Park, is a natural oasis that attracts more than 50 visitors annually who come here to enjoy its spectacular views and magnetic deep blue waters.

Lake George boasts over 109 miles (175 km) of coastline and over 300 islands, many of which have campgrounds.

Lake Champlain, located on the border of New York and Vermont, is a pristine pool of azure waters. Like most places in the northeast, Lake Champlain has a pretty rich history. The lake itself and the surrounding land played an important role in three American wars: the French-Indian War, the American Revolution, and the War of 1812; Visitors can learn more about these events at the Champlain Lake Maritime Museum in Vermont. History aside, Lake Champlain is a popular summer destination; its azure waters and soft sandy shore are an irresistible sight.

South of the United States 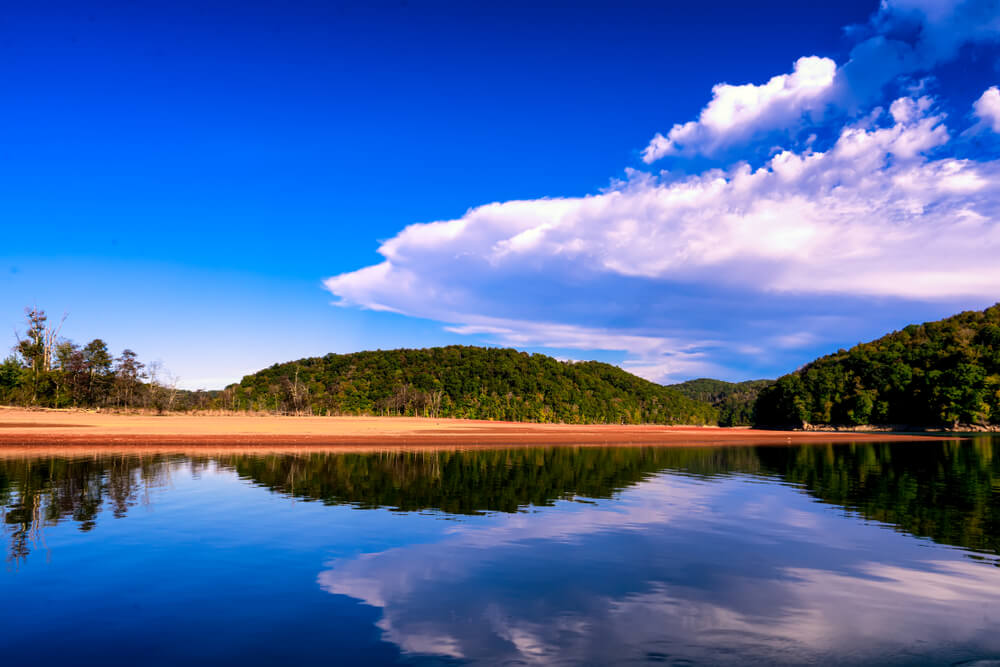 Lake Norris has 809 miles (1 km) of coastline, 300 acres (33 ha) of water surface and is the largest reservoir on the Tennessee River tributary. But Lake Norris is much more than just excellent statistics. First, the water in it is bright blue. The hills of East Tennessee surround Lake Norris, and the distant peaks set against the backdrop of this azure lake create the perfect combination for relaxation. It's no surprise that Lake Norris, home to many parks, campgrounds and residential areas, is one of the most popular holiday destinations in the south of the country.

On the subject: A man from Chicago jumped into the lake for 365 days in any weather: how and why did he do it

Few people realize that Oklahoma hides one of the country's crystal-clear lakes: Lake Murray. This dazzling gem is located in Lake Murray Park, Oklahoma's first and largest park, which consists of 12 acres (500 hectares) of forest cover surrounding the lake of the same name.

Located in the center of Lake Murray, you can see all the way to the bottom, which is rare in most lakes. On the shore is the Tucker Tower, a castle-like monument that adds charm to the lake.

Lake Torch in Michigan is famous for its clear waters. Part of Michigan's Chain of Lakes - 14 lakes and connecting rivers - Torch Lake is the state's longest inland lake. It really looks like it belongs to the Caribbean.

Lake Torch is so crystal clear that boats and swimmers seem to be suspended in mid-air. This is what you really need to see.

Lake of the Ozarks - Missouri

Lake of the Ozarks is an unexpected oasis in Missouri, a state better known for its cultural life. A huge man-made lake created by the flooding of the Osage River in central Missouri, Lake of the Ozark is a favorite summer vacation spot for Missourians. It boasts deep blue waters and a distinct serpentine shape, colloquially known as the "Magic Dragon Puff."

The magnificent Lake Michigan truly belongs to the states of Michigan, Wisconsin, Illinois and Indiana. However, this azure blue lake is the main part of Chicago. Let's start with a geography lesson: the United States and Canada have the largest group of interconnected freshwater lakes on the planet in terms of total area.

The Great Lakes of North America are made up of five lakes that contain 21% of the world's fresh water by area. Lake Michigan is the third largest of the Great Lakes, with a coastline spanning four states.

In addition to intriguing geography, Lake Michigan is a magnificent body of water and an integral part of the Chicago cityscape. Millennium Park is the most popular lakeside recreation area in Chicago, and people flock here from all over to admire this spectacular body of water, especially at sunrise.

It is the largest freshwater lake by surface area worldwide, with a coastline of 2700 miles (4 km) spanning three states (Michigan, Minnesota, and Wisconsin) and ending with Ontario, Canada.

The lake looks like the crystal clear waters of the Pacific Ocean, and the landscapes here seem to have left the pages of books.

When a devastating wildfire engulfed the forest around this lake in early 2021, Colorado residents feared the worst, but somehow this wonderful lake survived.

Lake Hangin is one of the pearls of Colorado; it is a lush oasis of vibrant colors and beautiful landscapes. The water acquires a characteristic turquoise hue due to the dissolved carbonate minerals; and as if that weren't enough, the lake is surrounded by picturesque waterfalls and a canyon. All this together seems unreal.

Lake Tahoe is an American icon. One of the most beautiful and popular lakes in the country, Lake Tahoe is located on the state border between California and Nevada, surrounded by the majestic snow-capped peaks of the Sierra Nevada Mountains.

Lake Tahoe, located at 6225 feet (1,9 km) above sea level, is the highest lake in the country and also the second deepest. The cold crystal clear waters of this lake are mesmerizing and really cause a feeling of awe and wonder. Lake Tahoe is often referred to as one of the most beautiful places in the country and it truly deserves every praise.

Lake Powell is a man-made lake that is a stunning testament to the power of humanity. As a result of the closure of the Colorado River at Glen Canyon on the Utah-Arizona border, Lake Powell is the second largest reservoir in the country. In addition, it is undoubtedly one of the most beautiful and unspoiled lakes in America.

The lake's bright cobalt hue, combined with the crimson cliffs and colorful canyons of the southwest, will leave you speechless. In some places, the water is so clear that it reflects the sky, so Lake Powell takes on a stunning sky blue hue on a sunny day.

Lake Chelan in Washington, right in the middle of the state, looks too pretty to be real. Lake Chelan, known for its clear waters, boasts stunning natural beauty. It is the third deepest lake in the United States. Its maximum depth is 1486 feet (450 m) in the Wapato and Lucerne Basins, which were formed by glaciers during the Ice Age. Today, visitors come to enjoy its splendor at the eponymous Lake Chelan Park.

Coeur d'Alene Lakes is the second largest lake in Idaho. More than 55 lakes are located in the Coeur d'Alene region of Idaho; modern remains of ancient glaciers of the Ice Age. The pearl of this area is the magnificent Coeur d'Alene lake. This 25-mile (40 km) lake has some of the most strikingly blue waters in the world to be enjoyed on one of its superb beaches. 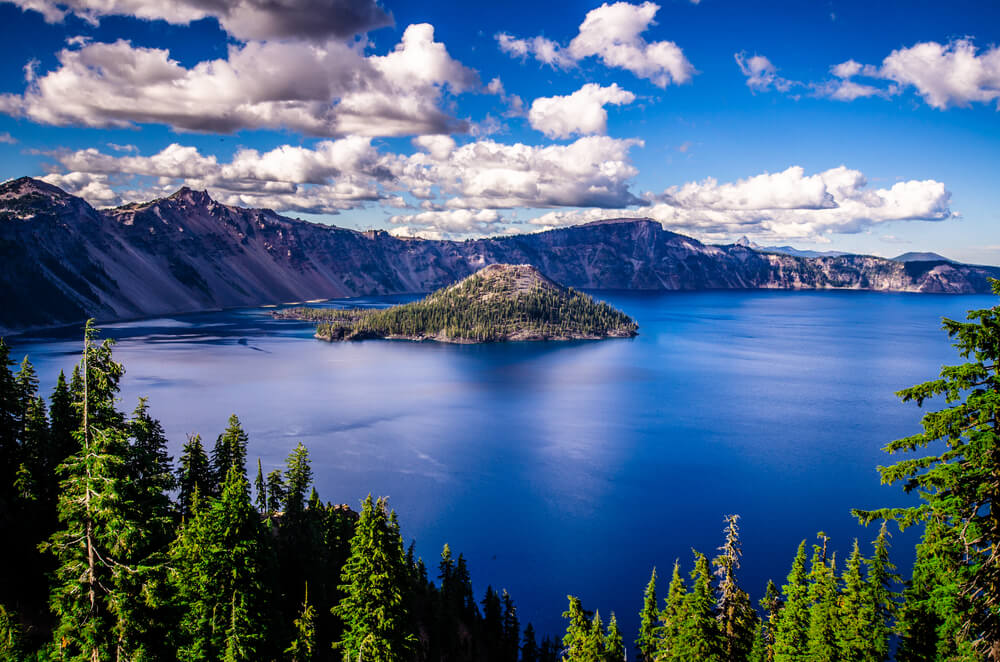 Perhaps the most famous lake in the country, Crater Lake is a place of otherworldly, almost incomprehensible beauty. Crater Lake, 1949 feet (590 m) deep, is the deepest and cleanest lake in the United States. Water into the lake comes entirely from snow and rain, since there are no inputs from other sources. This means that no mineral deposits are transferred to Crater Lake, making it one of the cleanest lakes on the planet. This natural wonder attracts over 750 visitors every year.

These lakes are the pinnacle of beauty and show how incredibly amazing the United States really is.