Home Educational program Growth of seismic activity in Yellowstone: 5 billion people may die in the event of a volcanic eruption

Over the past 28 days, the 73 earthquake occurred in Yellowstone Park in Wyoming, the newspaper writes Express. All tremors were relatively small. The most powerful earthquake was recorded on April 29, its power was 2,6 points. 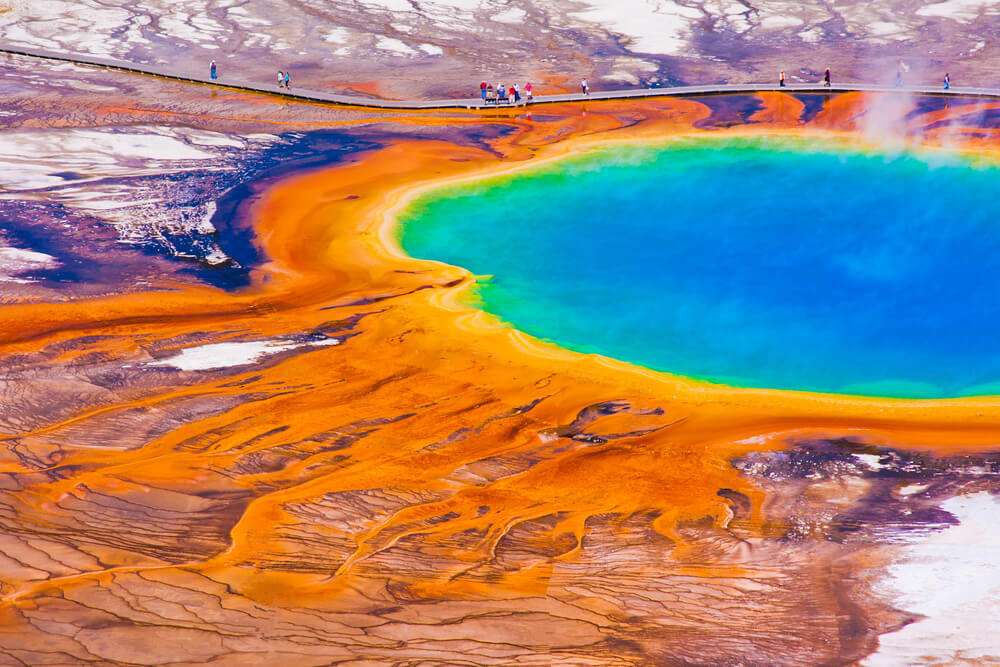 Since the beginning of May, the number of jolts has increased, according to the US Geological Survey (USGS).

Scott Burns, a professor of geology at Portland State University, says that numerous small tremors around the volcano mean that magma and gases beneath the surface are beginning to move upward.

In turn, Jamie Farrell from the University of Utah in Salt Lake City believes that this is only part of the natural cycle of Yellowstone volcano.

“Numerous earthquakes are fairly common in Yellowstone. There is no indication that this is due to magma moving through the shallow crust, ”he says.

A number of earthquakes were also accompanied by a sudden eruption of Ledge-Geyser, which did not show any activity for three years until April 28.

On the subject: Above Supervolcano Yellowstone awoke a geyser that slept 60 for years.

Experts study the behavior of geysers to find out if their activity indicates that an eruption may occur in Yellowstone. If this volcano erupts, about 87 thousands of people will die, and two-thirds of the United States will become uninhabitable.

A large ejection of volcanic ash into the atmosphere will block sunlight and directly affect life on Earth, creating a “nuclear winter”.

An eruption can be a thousand times more powerful in 6 than the eruption of St. Helens volcano in Washington in 1980, which resulted in the death of 57 people, and in different states and five Canadian provinces ashes formed.

Scientists note that the Yellowstone volcano in the northwest United States is one of the largest potential natural disasters. Located among the picturesque mountains and valleys of Yellowstone National Park, the supervolcano is active and under constant surveillance.

Dr. Jerzy Zaba from the University of Silesia in Katowice, Poland, believes that an eruption at Yellowstone could cause a devastating climate change.

“I predict that an eruption similar to what happened 640 years ago could wipe out most of the United States. The ejected materials will cover an area within a radius of 500 km and a layer a meter thick, ”says the scientist.

“Due to the release of volcanic ash, gases and sulfur oxide into the atmosphere, we may witness a cooling snap. Sulfur oxide can create a thin curtain of sulfuric acid around the planet, blocking the access of sunlight. This situation will continue for many years. I estimate that about 5 billion people will die of hunger due to the effects of climate change, ”the scientist adds.

According to the expert, if Yellowstone erupts, then the only sensible decision that can be taken is to flee the North American continent.

On the subject: When is the best time to come to Yellowstone, and for what

According to the scientist, there are no mechanisms and tools to prevent a volcanic eruption.

“The only thing that can be done is to evacuate people. However, if we are talking about an entire nation, by the way, rather large, then we need to evacuate to another continent. These are forces that people have no influence on and should be watched with incredible humility, ”the Polish scientist notes.

According to him, it is impossible to predict when exactly the eruption will occur. Over the past 36 of millions of years, a total of 42 eruptions of supervolcano have occurred, which occurred on average less than once per million years.

The first of the three giant eruptions of Yellowstone's supervolcano occurred 2,1 a million years ago and formed the caldera of Island Park, and also formed the tuff deposits of Huckleberry Ridge. Then the mountain chains broke up from the explosions, emissions rose to an altitude of 50 km - to the upper boundary of the stratosphere; volcanic ash covered more than a quarter of North America.

The second eruption of Supervolcano occurred 1,3 a year ago; then the emissions of the awakened Yellowstone amounted to 280 cubic kilometers. As a result, formed a large caldera Henris-Fork.

The third eruption took place 640 000 years ago; it was twice as weak as the first time. As a result of the eruption, the top of the volcano collapsed, forming a caldera - a huge circular depression with a circumference of 150 km. In addition, the eruption formed lava creek tuff deposits.

Summary of the Yellowstone Volcano:

11 routes in the US, which is worth a ride for everyone

153 earthquake occurred near Supervolcano in Yellowstone

11 wild and expensive places to stay in the USA