Home In the U.S. New York Times: The United States launched a digital invasion of the Russian power system

The United States is building up a digital invasion of Russian power grids, which serves as a warning to President Vladimir Putin and demonstrates how the Trump administration can use new opportunities to use cyber-weapons against Russia. This was reported on Saturday with reference to sources in the US presidential administration. New York Times. 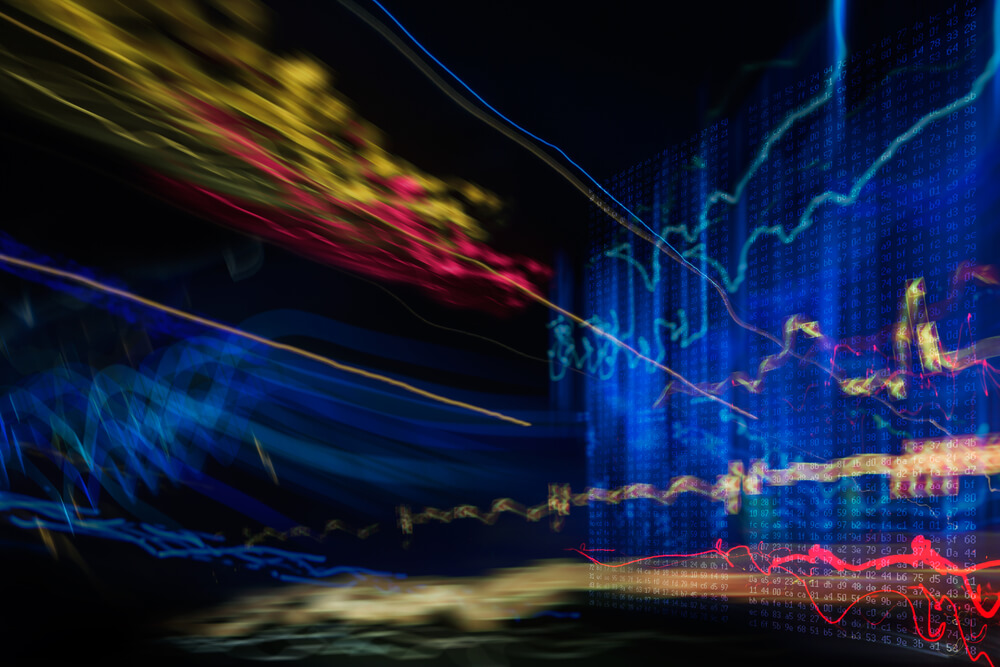 During conversations that took place in the last three months, representatives of the White House told reporters that American malicious codes were placed in the computer systems of the Russian power grids and other strategic facilities. These actions were a response to Moscow, which organized a campaign of disinformation and cyber attacks during the mid-year elections in the US 2018.

According to the newspaper, both countries have long been keeping each other’s energy networks at gunpoint and periodically probing them for vulnerability. Back in 2012, according to the New York Times, the United States placed sounding programs on the Russian grid.

On the subject: US accused Russia of cyber attacks on the power grid

However, the article says, if before that the activities of both sides in the power grids could be called sluggish military operations, now the American side has launched a decisive offensive. The newspaper claims that the United States has placed a truly malicious code on Russian networks.

According to the article, the interlocutors of the publication described the placement of this code, on the one hand, as a warning to Russia, and on the other, as a safety net in case of an open conflict with Moscow.

Supporters of a more aggressive strategy argue that the need for this is long overdue. For several years, the Department of Homeland Security and the Federal Bureau of Investigation have publicly warned that Russia had introduced malicious programs into American networks that could disrupt the operation of power plants, oil and gas pipelines, or water supply systems in the event of a possible conflict.

At the same time, such actions may increase the risk of an escalation of the “digital cold war” that is being waged between Washington and Moscow.

The sources of the publication refused to disclose exactly what actions had already been taken by Cyber ​​Command, a new structure within the Pentagon that deals with the issues of the cyber defense of the country. Last year, the White House and Congress vested Cyber ​​Command with powers to conduct operations in the systems of opposing countries.

On Tuesday, John Bolton, national security adviser to President Trump, said that the US is now considering such actions as an opportunity to "tell Russia, or anyone else who is engaged in cyber operations against us:" You will pay. "

The head of the United States Cyber ​​Command, Lieutenant General Paul Nakasone, spoke openly about the need for "active defense" in the enemy’s networks to demonstrate how the United States can respond to online attacks. “They are not afraid of us,” he said during last year’s Senate hearing.

On the subject: The United States imposed sanctions against Russia because of interference in elections and cyber attacks

Donald Trump gave Cyber ​​Command new powers last summer. It is known that a presidential memorandum, the content of which remains classified, gives Nakasone the right to conduct online operations without prior approval from the president.

However, it seems that actions within the Russian energy system are conducted by the Cyber ​​Command with the help of other powers approved last year by the Congress. The war sanction law allows for “covert military activity” in cyberspace to “deter or defend against attacks and other malicious acts” against the United States. According to the law, Cyber ​​Command may receive permission for such actions from the head of the Department of Defense, without the need for approval from the President.

Nakasone and Bolton refused to answer the questions of the New York Times about the possible penetration of Cyber ​​Command into the Russian power supply systems. Declined to comment and representatives of the National Security Council.

John Bolton, who spoke at a conference held by the Wall Street Journal on Tuesday, said: “We believed that the response in cyberspace to (Russian) interference in the elections was the highest priority last year, and it was we who focused on it. But now ... we are expanding the areas in which we are ready to act. "

According to two sources in the administration, President Trump was not informed in detail about the details of the operation to introduce software codes into the Russian grid that could monitor or attack the system from the inside. Representatives of the Pentagon and the security services told the publication that their leadership was not convinced of the need for Trump's dedication to the details of the operation conducted against Russia. They are afraid of the reaction of the president, as well as worried about the fact that Trump may cancel the order or discuss this operation with foreign officials. So, in 2017, the president, in an interview with the Russian foreign minister, mentioned a secret operation that was conducted by the United States in Syria.

On the subject: Trump has signed a decree on sanctions for cyber attacks

At the moment there is no evidence that the United States was able to disrupt the work of the Russian energy system. Similarly, Russia still has not turned off the light on American territory. However, placing malicious code inside both systems again raises the question of whether the power grid, like any other critical infrastructure facility, is a legitimate target for online attacks.

Donald Trump reacted to the New York Times article on Twitter. He called the information presented in the newspaper a lie, and the actions of the newspaper - “treason”.

“Just think, the dying New York Times just wrote that the United States is significantly increasing the intensity of its cyber attacks on Russia. This is actually a betrayal on the part of the once great newspaper, which is chasing a sensation - anyone, even if it hurts our country, ”the American president wrote. 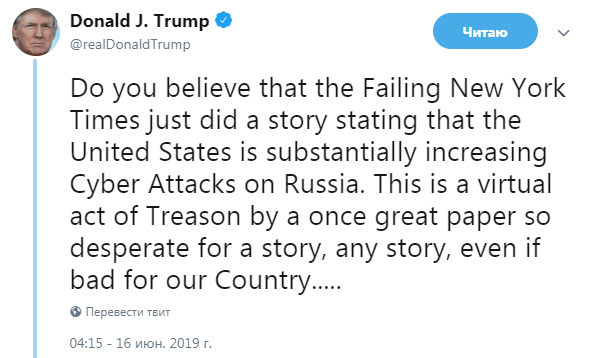 In his next tweet, Trump added that "among other things, this is not true."

“Corrupt media now publish whatever they want. They do and say what they want, and do not even think for a second about the consequences. These are real cowards and, no doubt, enemies of the people! ” - said the American president.

The United States launched the first cyber operation against Russia