Oleg Kuzovkov with Masha and the Bear. Photo of the press service. Collage - Alexander Shatov.

The creator of the cult cartoon "Masha and the Bear" Oleg Kuzovkov does not like giving interviews and drawing attention to his modest person. He usually jokes that "no star". But for the sake of the "Forum" Kuzovkov, who dangles between Los Angeles and Moscow, made an exception and gave an interview.

Oleg Kuzovkov studied at the Moscow Institute of Steel and Alloys, then moved to the Geological Prospecting Institute. But even before the collapse of the Soviet Union, since 1988, he did not work in his specialty - he drew cartoons and other interesting things.

In Russia, among others, Kuzovkov worked in the Pilot studio. In 1998 he moved to Los Angeles and worked at Kinofilm, then at the Animaccord studio. Here “Masha and the Bear” was born. Moreover, as Kuzavkov jokes, in the Russian landscapes of the cartoon, you can still recognize a graduate of the Geological University. But the inspiration for "Masha and the Bear" was the cartoon "Tom and Jerry".

The series about the funny hooligan Masha is popular not only in Russia (for example, one episode “Masha + Kasha” gained more than 650 million views on YouTube), but also all over the world. Masha and the Bear has been broadcast in 39 countries and translated into many languages, including Korean and Swedish.

In Russian, Masha is voiced by 12-year-old Alina Kukushkina. She flew to America on purpose to train American actress Elsie Fisher, whose voice Masha speaks English. To adapt the cartoon to the American market, Kuzovkov and the team localized and duplicated the cartoon in Los Angeles.

And in America awards and recognition have already found "Masha and the Bear". This March in Miami at the Children's Film Awards Kidscreen awards the cartoon won the first prize for the best animation. “This award, a kind of analogue of the children's Oscar for the television industry, shows that the domestic animation has reached a completely new level,” stressed the producer of the series Dmitry Loveiko.
The distribution rights for the cartoon were purchased by Cartoon Network, Sony Music and NBC Universal, among others. And in August "Masha and the Bear" in English will show online on the Netflix site in the section for children up to 12.

The cartoon is six years old, and its popularity is growing in Russia and in other countries. What is the secret of success?

I can explain such interest of the audience from different countries to the fact that the project is universal and unique at the same time. The theme of the relationship between the child and the adult is eternal, and the situations in the series took place, probably, with everyone, therefore there is nothing surprising in such sympathy for the animated series. In addition, the quality of animation and music, which is rare for modern serial projects, also do their job.

Is there a prototype for Masha?

Even from the comments of the audience, it is clear that exactly the same Masha exists in every family.

What cartoons did you bring up?

I watched everything that all Soviet children watched. Soyuzmultfilm.

Do you draw on topics from your own relationships with children?

What is more important in a cartoon - a picture or a plot?

The ability to combine both. 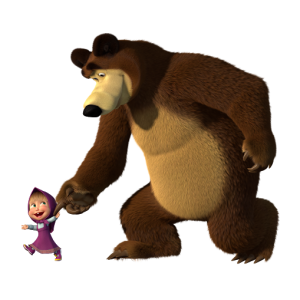 Do psychologists work on a cartoon to make it informative?

How much has the project brought over the entire existence?

Many difficulties and joys.

A whole industry has been created around Masha and the Bear - there are toys, coloring books, backpacks, and so on. Who makes money on it?

The production of a project of such quality is quite expensive, so the lion's share of income from sales covers just the cost of production.

There are ideas for new projects, but now I’m busy with 24 hours a day.

When and how will "Masha and the Bear" end?

Nobody expected that the project would have such popularity, therefore we don’t want to think.