Home Immigration in the USA The Difficult Path to the American Dream: Immigrants are finding it increasingly difficult to obtain US citizenship

On a fall morning, Jonas Waldab arrived at the Paramount Theater in downtown Auckland, California. The landmark in the Art Deco style, built in the 1930's, resembles the golden age of Hollywood, with high ceilings and spiral staircases. Valdab, in an elegant dark suit, is dressed for a special occasion, like those around him: women in floral blouses, children in dresses and suits. 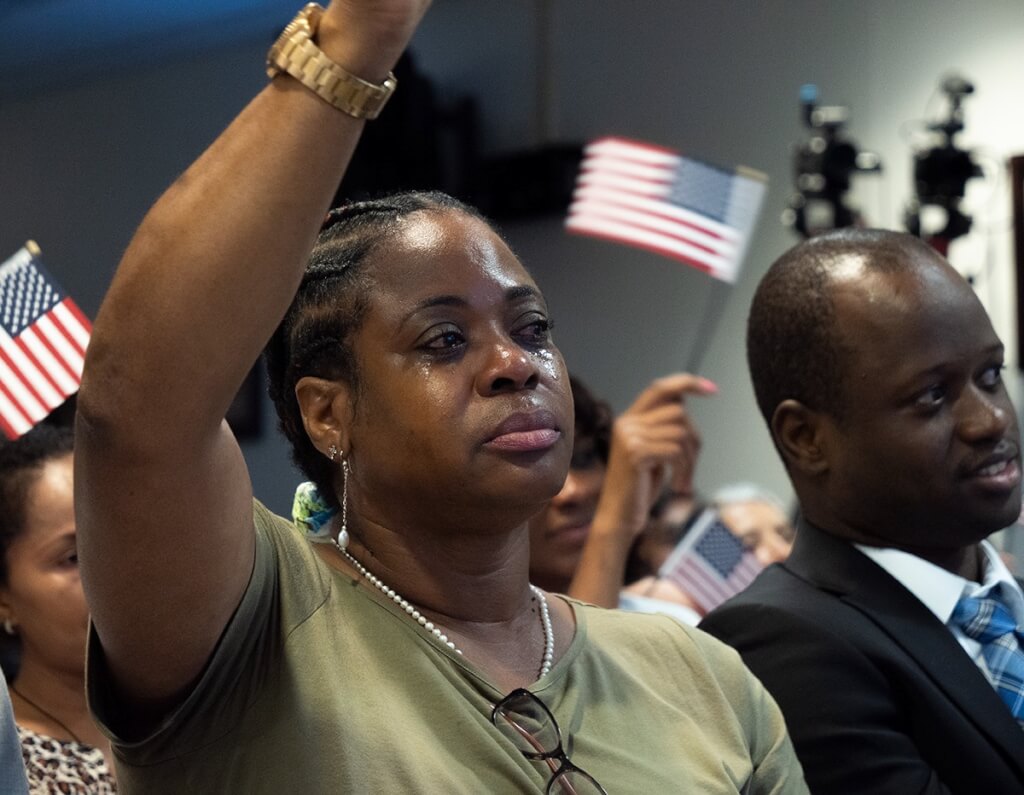 What else united them was the tiny US flags. Almost everyone was kept one at a time. The flags marked this event - the naturalization ceremony - and the end of a long journey that usually takes many years.

“God bless America, God bless the American people, these wonderful people. I am very happy to be a part of them, ”said Valdab, who is from Eritrea. He then waved to his wife and two young children as they walked to the balcony to watch.

Hundreds of thousands of people participate in such ceremonies every year. They are overseen by the United States Citizenship and Immigration Services (USCIS), a federal agency. But the process of becoming a U.S. citizen under the Trump administration has become increasingly complex. Candidates face closer scrutiny, alleged increases in filing fees and long processing times - expectations that could prevent thousands of future U.S. citizens from voting in the 2020 general election.

Most immigrants must wait five years to qualify for citizenship. After that, the process usually progresses pretty quickly.

Everything has changed since President Donald Trump took office.

On the subject: 10 steps to naturalization: the process of obtaining US citizenship

Waldab waited over a year after he applied for citizenship to attend a naturalization ceremony - a wait typical of the Trump administration. At the national level, the expectation of citizenship is now an average of 10 months, almost double that of just two years ago. The wait can vary greatly depending on location. Apply for citizenship in Albany, New York and the waiting time ranges from 10,5 to 17 months. In Baltimore, the range is 9 to 22 months. In Las Vegas - from 13,5 to 18,5 months.

However, the growth in the number of citizenship applications prior to the 2016 election of the year has not subsequently declined, as in the past. Applications were piling up as Trump's anti-immigrant rhetoric of the campaign turned into executive orders and other measures that attempted to limit immigration. Some of the new policies may complicate the process of becoming legal permanent residents citizens. Attorney General William Barr has simplified the deportation of lawful permanent residents who commit certain crimes.

“The two-year spike in applications has resulted in a heavy workload for USCIS workers, and processing just can't keep up with demand,” said Julia Gelatt of the Migration Policy Institute, an independent think tank in Washington, DC.

Avalina Cadena, originally from Mexico and came to the United States as a child, works at a Hispanic radio station near Seattle. She said Trump’s victory in the presidential election convinced her to obtain citizenship.

“I'm afraid that the laws will change, and I will lose my green card,” she said. After more than 15 months, Kaden’s expectations swore in mid-November.

There was also a second side to a woman's decision to apply for citizenship: to vote in the 2020 presidential election. “Yes, yes, I want to vote,” she said.

But people starting the naturalization process today may not become citizens until next year's election. Robert Preuss, a professor of political science at the University of Colorado at Denver, believes that about 157 000 people across the United States may miss their chance to vote in the 2020 year.

In written statements, USCIS representatives said that the number of citizenship applications had “skyrocketed” under President Barack Obama, and that the agency hired new employees and opened new offices to keep up with the large number of applications and the backlog.

However, under Obama and previous administrations, waiting times were much shorter.

There are many new obstacles to participation. Over the years, the non-refundable fee for a naturalization application has steadily increased from a minimum of 35 dollars in the 1980's.

USCIS has proposed raising the current $ 640 filing fee to $ 1170 - an 83% increase. USCIS officials said the increase is needed to cover operating costs. 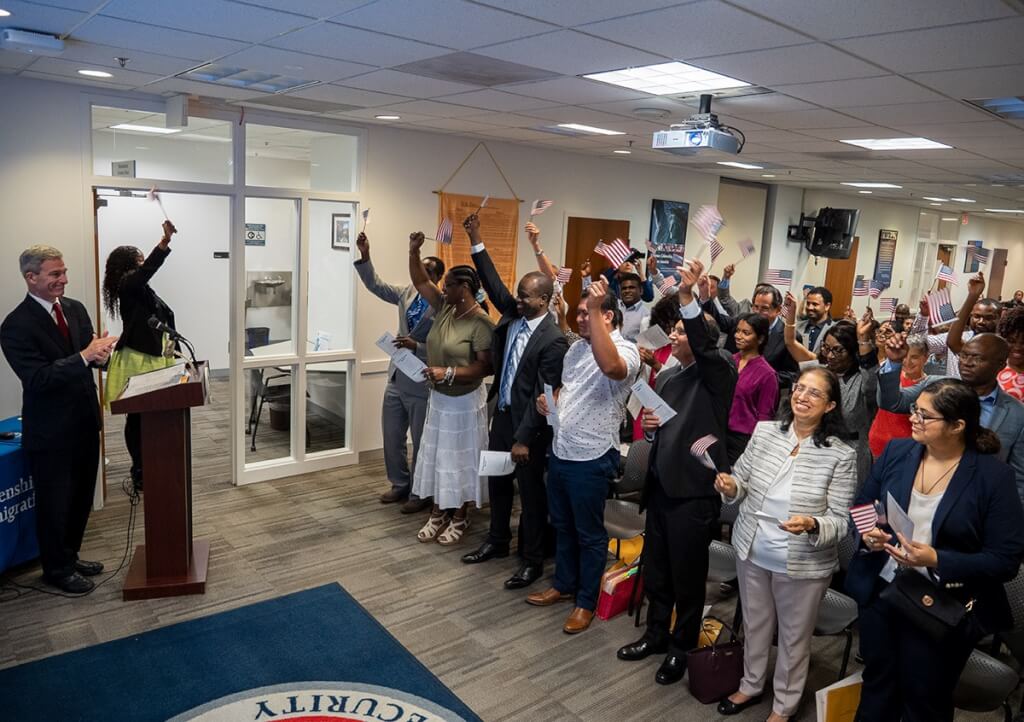 USCIS also made it difficult for low-income applicants not to pay a fee.

In one survey, about 18% of Latin American respondents identified financial and administrative barriers, including citizenship expenses, as the main obstacles to naturalization.

“If you have to choose between food, grocery or medicine and your naturalization application, what do you think people are forced to choose?” Said Emma Ibarra-Martinez, an immigration lawyer in Houston.

Meanwhile, lawsuits related to delays and denials of naturalization cases have also skyrocketed, up 66% last year, up from five years earlier, according to researchers at the University of Syracuse.

At the Auckland Citizenship Ceremony, the mood was warm and welcoming. US immigration officials gathered on stage to celebrate people from all over the world.

Randy Ricks, USCIS Immigration Officer, listed all 97 countries represented by people in the audience, in alphabetical order, from Afghanistan, Canada and El Salvador to Guatemala, India, Mexico and Zimbabwe. Ricks not only greeted people in English, but also in Cantonese, Spanish, Hindi, French and Tagalog.

On the subject: How I became a citizen of America: the process of naturalization from A to Z

However, people like Ricks, a longtime USCIS employee who tries to greet new citizens in their own language, today are not setting the tone for USCIS at the national level. Agency management took a tough stance, shifting the mission from promoting citizenship to enforcing immigration laws.

In November, Cucinelli received a promotion. Trump called him acting deputy director of the Internal Security Service, which oversees the USCIS, immigration and customs authorities (ICE), and customs and border services (CBP).

Cucinelli became the spokesman for the immigration administration. It supports family custody and the termination of citizenship at birth. Last year, he compared migrants at the border with invaders who should be brought back. 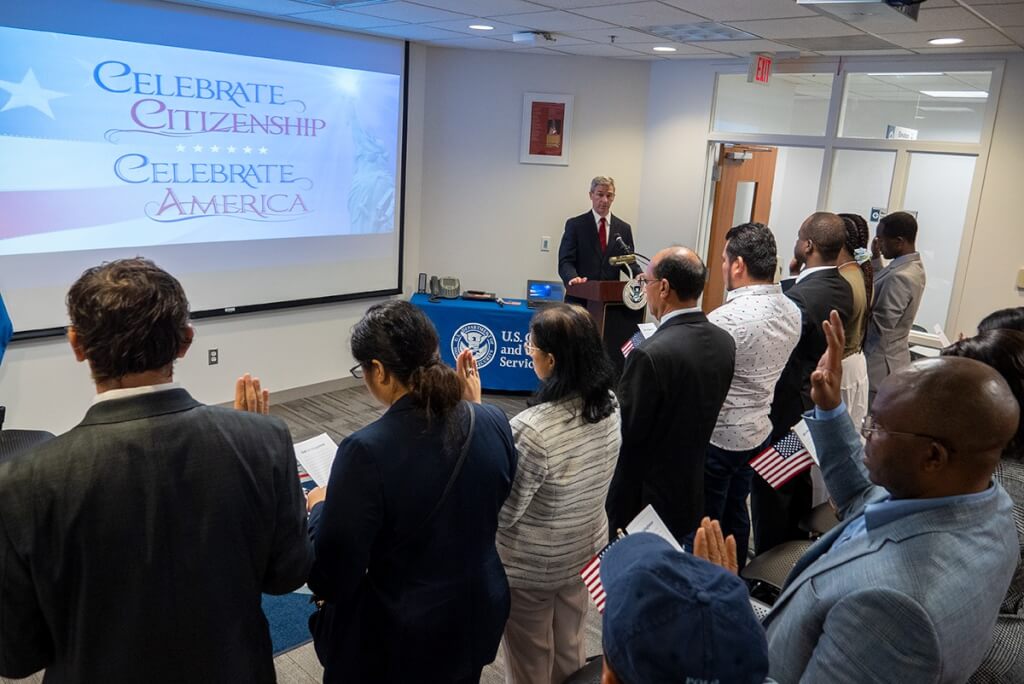 Cohen and other lawyers point out that most citizenship applicants are green card holders who have been checked previously, often twice.

“This country is now your country”

Returning to the citizenship ceremony, Trump's face appeared on the big screen to convey a pre-recorded message.

When the ceremony was over, everyone stood up, raised their right hand and took the oath of allegiance:

“I hereby swear under oath that I completely renounce and renounce all loyalty and devotion to any foreign prince, authorities, state or sovereignty of which or to which I have so far been a subject or citizen; that I will support and protect the Constitution and laws of the United States of America from all enemies, both foreign and domestic ... "

The oath lasts two solid minutes. However, for many here, it took years, and this process is becoming longer and more difficult for those who apply today.