“I zabukalsya to the dentist on the Timorrow. My child rooms are playing on the street. ” Journalist Tatyana Khudyakova calls this anecdotal mixture of Russian and English a “Brighton syndrome”. At the request of the portal SM she understands how this peculiar dialect became popular in Brighton Beach and other areas of English-speaking countries where Russians live. 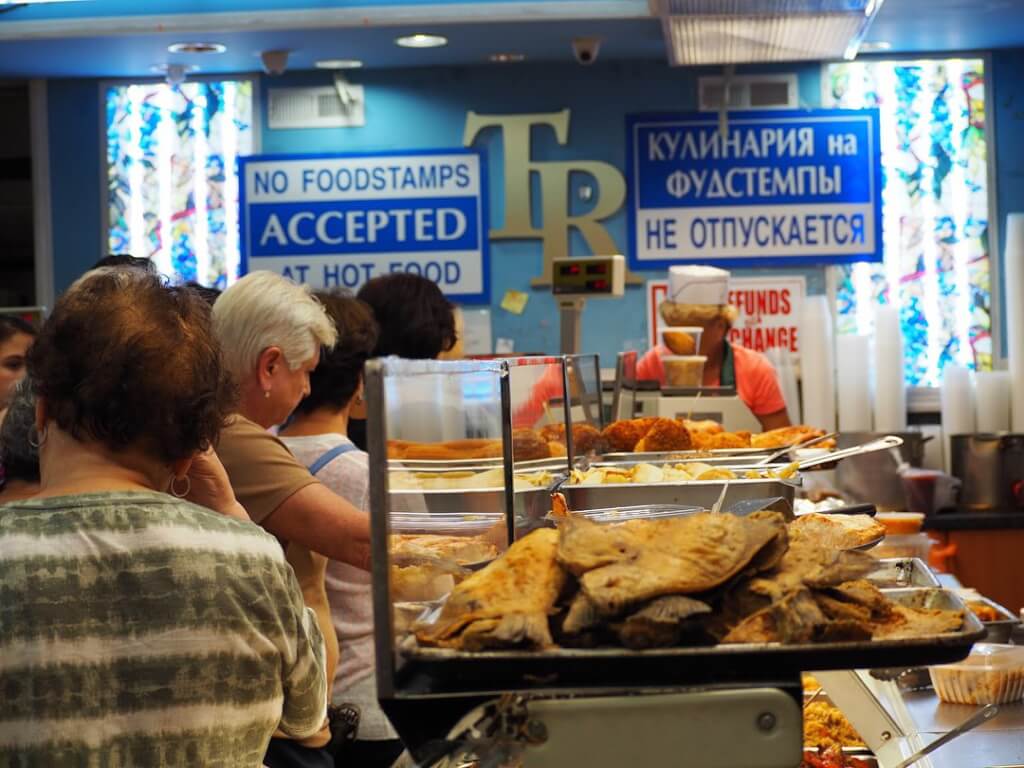 "Send or by the whole letter?"

You must have seen this unforgettable video, the golden classics of YouTube. A resident of Toronto (in the past - Odessa) Zoya Vekselstein was not just an Internet star, but a symbol of a whole sociocultural phenomenon called “Runglish”.

The term "runglish" is derived from a simple merger: Russian + English. In 2000, they named the language in which the astronauts spoke aboard the International Space Station. The word immediately became very popular. Later they began to jokingly call it “adverb”, which was spoken by immigrants from the USSR in English-speaking countries.

The undisputed capital of "Russian English" is located on Brighton Beach. This small area in the south of Brooklyn before the Great Depression was a fashionable resort. With the advent of the economic crisis in the United States, the luxurious life in Brighton ended, and instead of wealthy European tourists, poor immigrants began to inhabit the area.

The place is picturesque, right next to the Atlantic Ocean. Nevertheless, Brighton Beach has long remained an unpredictable, hard-to-reach, criminal - and therefore isolated place. In fact, it became a zone of compact residence for immigrants from the USSR - it was thanks to them that the area was revived and expanded. And in the end it turned into a kind of enclave with its infrastructure, lifestyle and language.

The unique pseudo-dialect, in which the so-called “sausage emigrants” began to speak in America, has fallen into literature many times. Probably the most famous thing that was written on this topic is Tatiana Tolstoy's essay “Hope and Reliance”. Fragments of the dialogue went from there to the people:

Buyer to Seller: I am half-round Swiss low-fat cottage cheese.
Seller: Chu! .. Is that cottage cheese - Swiss-low fet? Well, then cheese!
Buyer (surprised): Cheese?
Turn (in anticipation): Cheese, cheese! Do not delay, but people are waiting.
Buyer (hesitant): Well, hang up half pound cheese.
The seller: do you need to send it or the whole letter? ”

The heroes of Vasily Aksyonov’s novel “New Sweet Style” - Russian émigrés in America - speak about the same way. The author even provided the book with detailed commentary-translations. There were such expressions: “shatapchik”, “fix the breakfest”, “how are you duing today” and so on. The book was written in the 1998 year, and today it would hardly need such a detailed comment: many of these parody words have become quite commonplace in immigrant ghettos.

"They will not choose in what language to speak"

Russian language closes the ten most common in the United States. According to the latest census, more than three million people of Russian descent live in the country itself. All of them (both immigrants from the Soviet republics, and descendants of emigrants from the Russian Empire, who were already born in the USA) are called Russians, regardless of their real nationality.

It is believed that there were four waves of emigration. The first was associated with the Russian-American company 1799-1881's. Enthusiasts came to America to develop new lands and establish settlements. The second began shortly before the revolution: the Jews were leaving (from the pogroms) and just those who did not want to live in Russia under the new government. The third wave came in the 1961-1986 years. These are the defectors who refused to leave home during trips abroad, and political emigrants.

The fourth, most numerous wave began after perestroika. The Iron Curtain fell, and they began to leave the USSR en masse in search of a new life. Apparently, this wave formed a strange language of Russian emigration. After all, former citizens of the Soviet Union did not know any language other than Russian. In Soviet times, a foreign language was taught weakly: even a round high school student who had memorized the entire grammar could not say a word in English.

Once in the new linguistic environment, the Russian Americans were still to the old: they communicated mostly with each other, settled in the same areas, went to Russian shops, read Russian newspapers, arranged for each other to work.

That did not help the integration. I didn’t manage to ignore English in America either: signs, signs, labels, TV shows - all this, of course, in the official language of the state.

And so it happened that our people naturally began to appropriate words from the dominant language - deftly embed them into their native Russian. For example, an English word was suddenly inserted into the Russian sentence, certain things were given new names (highway, flat, carpark). Or simply the Russian word was put to the Russian suffix. Sometimes real cadavres were born.

Some verbs lost their original meaning and got one that dictated English usage. So, the verb “stand” turned into the equivalent of the English stay, and instead of the Russian “declare”, a mysterious “enaunse” appeared.

In general, the speech of immigrants began to sound as if they could not choose what language to speak, and they were trying to both. The half-forgotten Russian was overlaid by missed English. The habit of speaking Ruglish (and even making signs on it) in Brighton Beach is still there.

Is it being treated?

Runglish does not always mean complete ignorance of the language. A person can try to form English sentences using jagged vocabulary while absolutely ignoring the language culture. Because of this, even grammatically flawless speech never sounds convincing enough for the media.

There is only one way to deal with this - to try to synchronize the thinking and the language that is currently being used.

If you are going to speak English - think in English. Getting started is not as difficult as it seems. Translate the gadget into English, watch movies and TV shows in the original, communicate more with native speakers.

And if you live in such a specific language environment like Brighton Beach, getting rid of the Russian-English dialect is not so easy. There is only one really effective way out - from the comfort zone. And the meaning in the construction of the third language will simply disappear, if you know the first two at a sufficiently good level.

Husband and wife, 4 children and cats: in Texas, a family was found dead in the garage of their own home