Home In the U.S. A family of Ukrainians from California fell into a fire trap on the highway. VIDEO

A family of Ukrainians from California fell into a fire trap on the highway. VIDEO

A talented 10-year-old violinist from Ukraine, Carolina Protsenko, who lives in California and is known both in the United States and outside the country, along with her mother almost ended up in a fire trap on the road, open for emergency evacuation of people in dangerous areas of the state covered by forest fires. A woman with a child had to drive through the road around which houses and forests were burning. 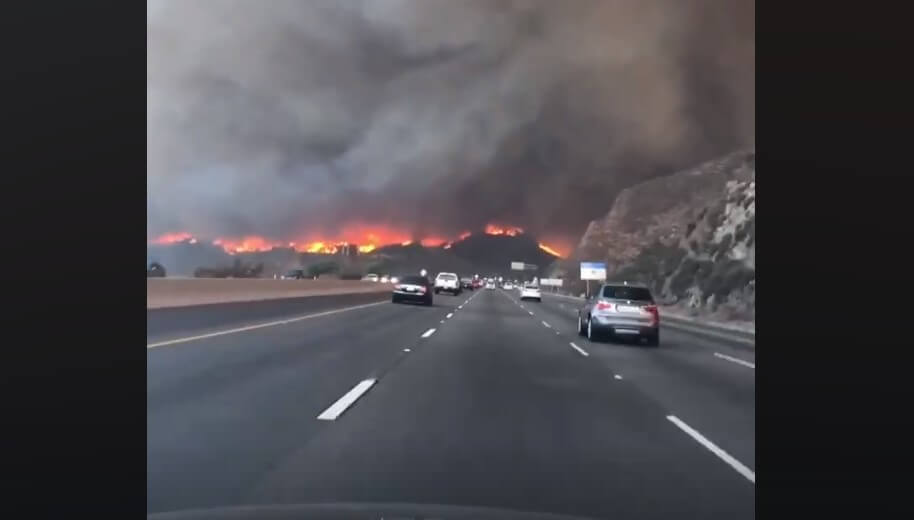 In the video recorded by the car registrar, you can hear how the mother calms her daughter and asks her to pray (both speak Russian), but at some point she loses her composure - horror is heard in her voice. The child is scared and crying. The road is smoky, everything around is on fire, you constantly have to stop because of the traffic jam created by the residents, who are also trying to evacuate as soon as possible. Fortunately, Caroline and her mother managed to escape the fire trap safely. The video was published on Karolina Protsenko's Facebook page with a signature in English:

“For the first time in my life, I felt that we could die. We are trapped in fire. Thank you, Lord, for our salvation. In this video I speak Russian. Mostly I just pray. I'm too emotional, I'm sorry. I just wanted to tell you, love, live and be grateful for every day of your life! ”

“With the right forest management, we can end the destruction that is happening in California. Wise up! ”, - wrote on his Twitter, US President Donald Trump, commenting on the fires in the state.

The day before, he blamed the fires on the state authorities, which, in his words, "poorly manage forestry." “Billions of dollars are allocated every year, and so many lives lost due to gross violations of forest control. Fix it immediately or no more federal payments! ”He threatened. 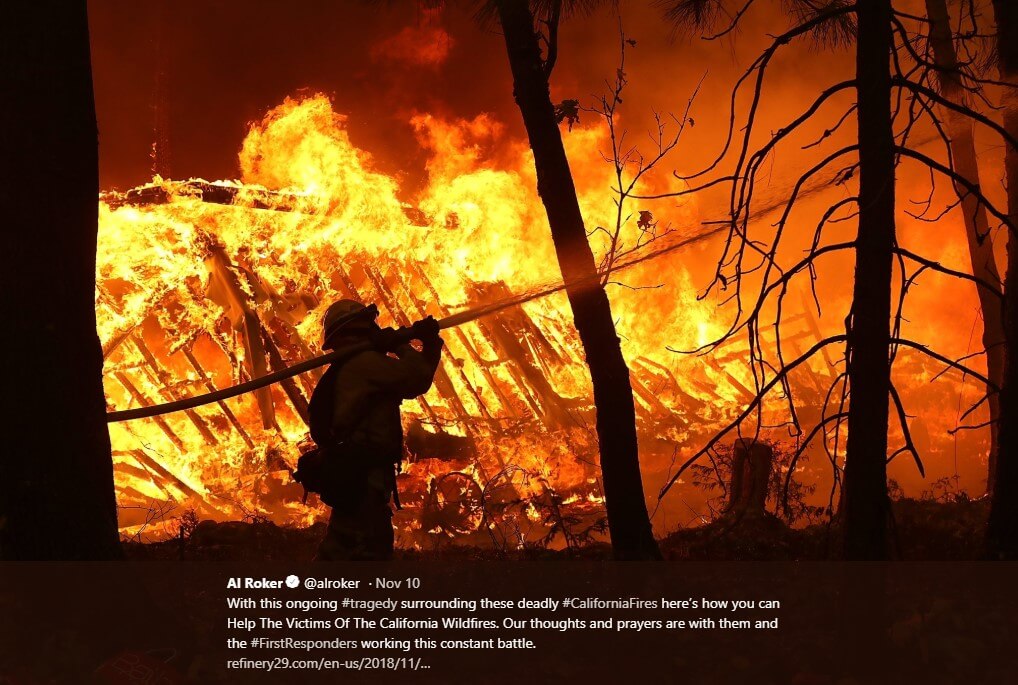 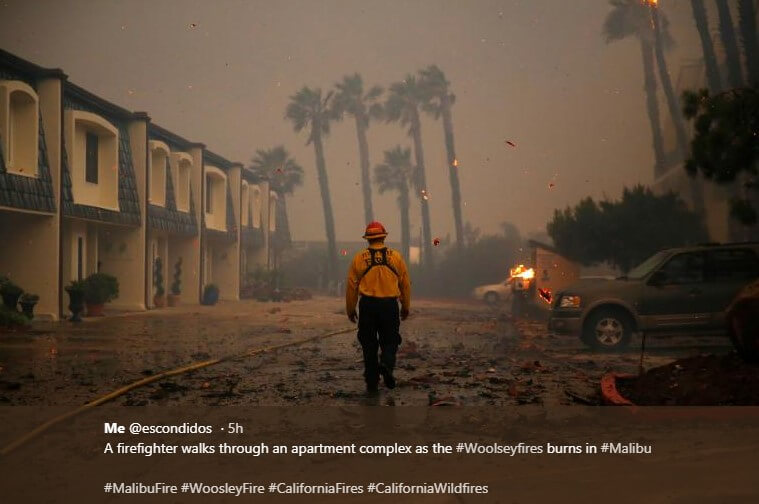 At the moment, three large fires are raging in California, one of which - in Northern California - became the largest and most destructive in the history of the state. According to local authorities, it has spread over 42 hectares. It was in this fire that killed 23 people out of 31. It almost completely destroyed the city of Paradise, and, according to data on Saturday, about seven thousand buildings in its vicinity.

Two more fires are raging in Southern California. They affected the Los Angeles area and Ventura County. The area of ​​one of them doubled overnight to 28 thousand hectares, the second - 1,8 thousand hectares. The fire spreads towards the Pacific Ocean and threatens coastal areas, including the popular Californian resort of Malibu. 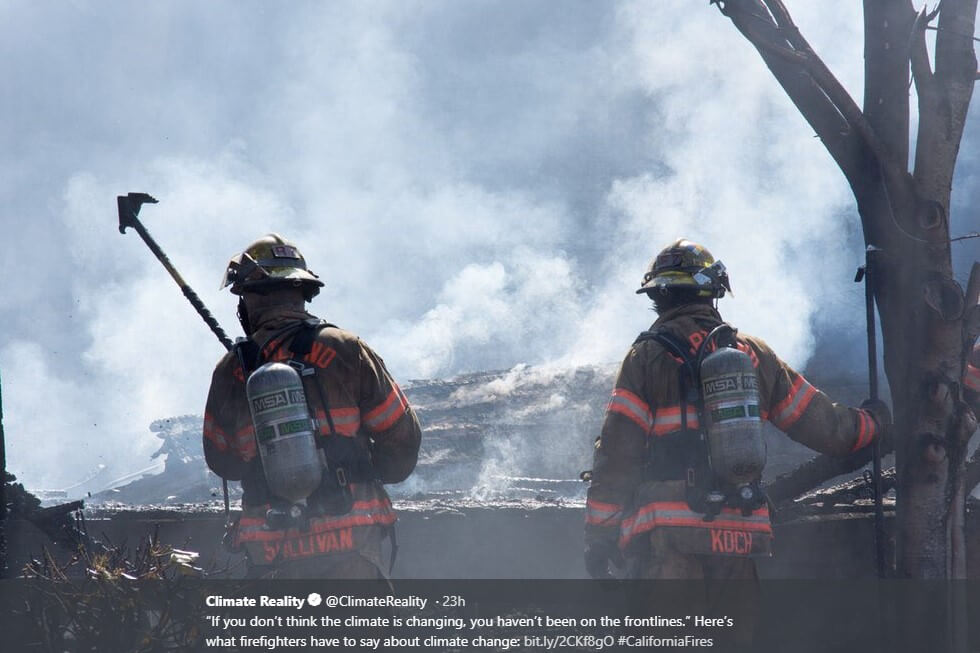 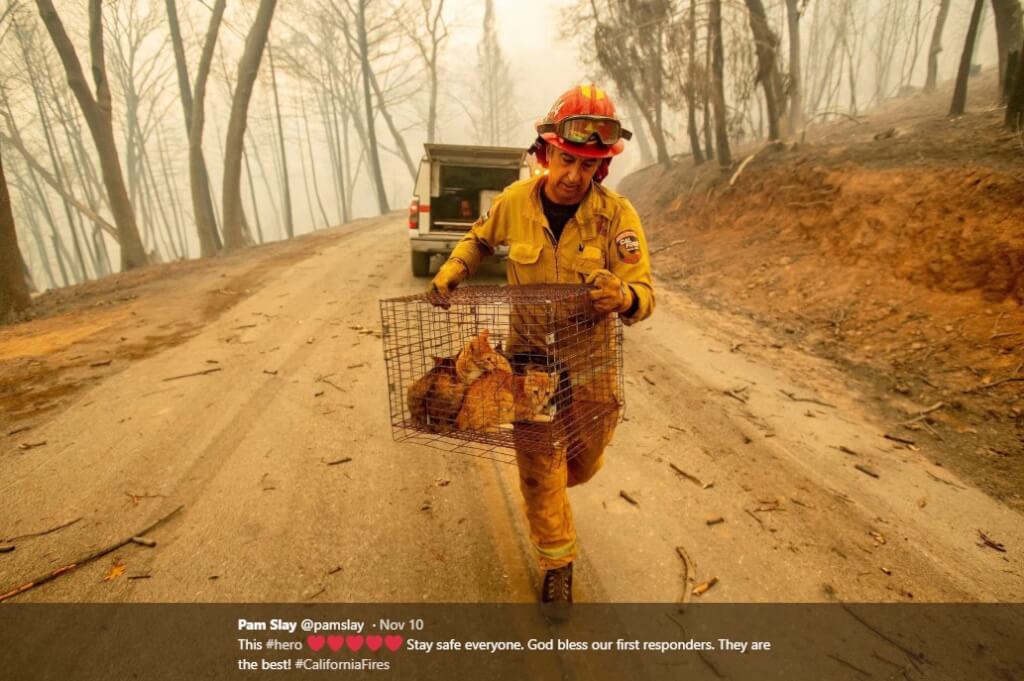 The state has been declared an emergency. According to forecasts of firefighters, in order to fully control the spread of fire, they will need about three weeks.

A fire broke out near the town of Towsend Oaks northwest of Los Angeles. At first, around 75 thousand people were evacuated here. However, now residents of other localities to the west of Townsend-Oaks, including the popular resort of Malibu, are forced to leave their homes.

Malibu and nearby Calabasas are famous for hosting many American celebrities. Some of them posted messages about the fire on social media. Some stars have completely destroyed houses - read in our latest publication.

Further north of the state, near Sacramento, another fire is raging. His victims were five people in the city of Paradise - they died in their cars. Thousands of residents, schools and hospitals have been evacuated from Paradise, which is home to 26 thousand people.

Due to car accidents, the roads leading from the city were practically blocked, and many residents of Paradise abandoned their cars and fled from the fire with children and pets in their hands. The rescuers cleared the roads, moving the cars into the ditch with bulldozers to allow ambulances and firefighters to drive through. 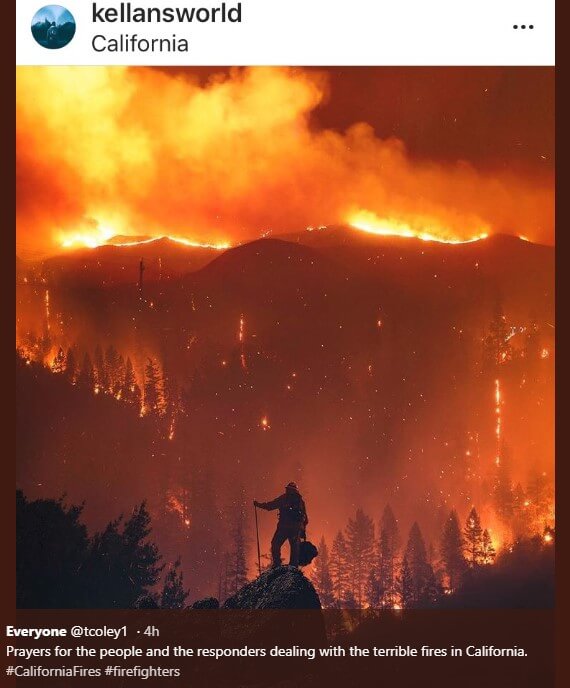 In total, 16 active fires are registered in California. In a large part of the north of the state declared a red level alarm This implies that the fire can reach these places within 24 hours.

Another similar video was posted yesterday - a couple from California made a desperate attempt to drive a car through a wildfire in the state. Shocking footage of their trip appeared on Facebook. In two days, the video has collected over 3 million views. You can watch the video here.

The TV channel “moved” the studio to a burning forest to show the danger of forest fires. VIDEO