Home Page culture Russian theater in America: Uzbeks will bring two geniuses to the USA at once

Within the framework of the Brooklyn Bridge festival, the State Youth Theater of Uzbekistan will present an online premiere of the play Worlds in Collision in the United States. The show will take place online on May 16th. Tickets can be purchased link. 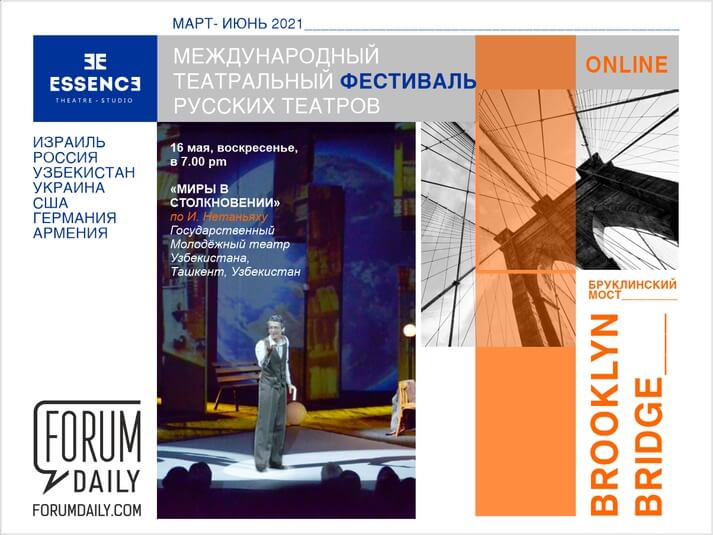 The play of the same name was written by Ido Netanyahu under the impression of a series of meetings between Professor Albert Einstein and Dr. Immanuel Velikovsky, as well as based on their manuscripts and letters to each other.

Immanuel Velikovsky (1895-1979) - physician and psychoanalyst, creator of unconventional theories in the field of history, geology and astronomy, in particular, the author of the resonant books "Worlds in collision", "Ages in chaos" and "revisionist" chronology, revising a number of provisions of ancient history.

Albert Einstein (1879-1955) - theoretical physicist, one of the founders of modern theoretical physics, Nobel Prize laureate in physics in 1921, public figure-humanist. He lived in Germany, Switzerland and the USA. Honorary Doctor of about 20 leading universities in the world, a member of many Academies of Sciences.

“In writing Worlds in Collision, I tried to explore the limits of Man in his striving to attain the Highest Perfect Knowledge, as well as the price he has to pay for it. Einstein, one of the two characters in the play, revolutionized our understanding of the universe and achieved great acclaim, while Velikovsky, the play's second character, tried to do the same, but in a different direction, and remained in disgrace. Why such difference? This is one of those intriguing questions that are reflected in the play, ”commented the author.

Spectators' impressions of the performance

“Probably, they live like this, Geniuses, - they walk on the earth, but they step through the Universe feeling it, seeing it, understanding ... You look at the stage, and you want to go there - to see how they are, to feel what only those who can feel it who got close to the Truth ... No, this is not a performance, this is Step Beyond the Boundary ... "

“The insides tore apart in two planes: first the brain - from a storehouse of interesting information, then the soul - from a wild desire to get up, run and shout:“ Someone, people, help Velikovsky! ” And after that there was an impression that the stage box had collapsed, the roof disappeared and there was a continuous real Space around the actors! .. "

Festival "Brooklyn Bridge 2021”, Which runs from March to June, is a series of performances by Russian-speaking theaters from all over the world. You will be able to get acquainted with new works of talented figures of the Russian theater from different countries.

And these are not just video performances, but a kind of new genre - performances created precisely online in a fit of communication with the viewer.

Walk of Fame for Jewish actors: on Jewish theaters in Manhattan and the tragic fate of the restaurateur Abe Lebevol

He knows the size of the legs of the stars of the first echelon: how a Ukrainian in the USA makes shoes for world celebrities