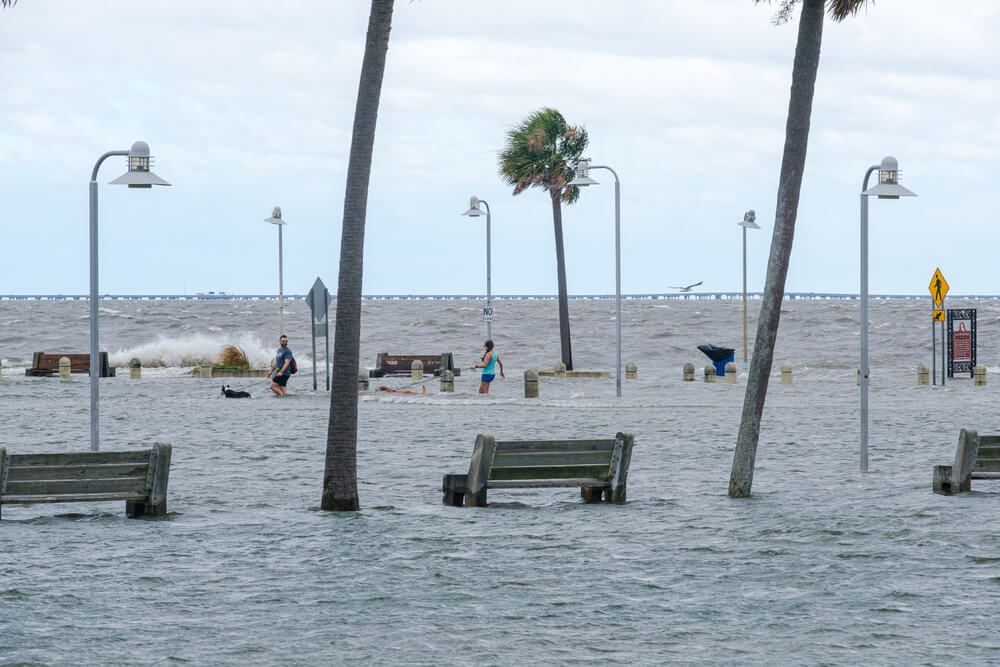 Escambia County Sheriff David Morgan reported the devastation at a press conference on Wednesday, September 16, adding that the assessment took place early in the morning. But he did not indicate the extent of the damage to the bridge that connects Pensacola to Gulf Breeze. City officials tweeted that the Three Mile Bridge was closed, posting a photo with a crane near the structure.

“Note that the three-mile Pensacola Bridge is closed,” the tweet said. - Stay out of the streets to ensure access for emergency personnel. Stay tuned".

Hurricane damage caused the bridge just a day after a barge hit the bridge, prompting authorities to close it shortly before 9 a.m. on Tuesday, September 15. The Florida Department of Transportation (FDOT) sent a team to assess the damage from this incident.

The FDOT announced that the original Pensacola Bay Bridge in 2010 was structurally deficient and a $ 430,2 million project was launched to replace it. The eastbound bridge construction opened in September 2019. The pedestrian and cyclist path opened in August 2020, and the westbound facility connecting Gulf Breeze to Pensacola is expected to be completed by the end of 2021.

Hurricane Sully hit the shore as a Category 2 storm near Gulf Shores, Alabama early Wednesday morning, September 15. Morgan likens the damage from hurricane in Florida to the aftermath of Hurricane Ivan in 2004 and calls it "dire." The flooding turned the streets into rivers. Pensacola police warned that the debris of hazardous debris "has become too much to list."

On the subject: Members of Parliament and Wives: How Hurricanes are Named

On Pensacola Beach early Wednesday morning, the sound of transformers exploding and metal scraping on the ground - debris from ripped roofs - could be heard.

“It will take a long time,” Morgan said. According to him, thousands of residents are expected to be evacuated due to floods and closed roads, he urged people to stay at home. No deaths or injuries have been reported at this time.

Storm surge after a hurricane is a separate risk, but resident of Gulf Shores, Alabama, Tina Lambert Bennett, saw an additional hazard when she discovered a “giant” alligator in the water after Sally's storm.

“I went upstairs to inspect the damage done to our property, as well as the neighbors' boat dock, accidentally looked down and saw this giant in the yard,” she told CNN.

Alligators are common in the area, she said, but this one was very large - about 12 feet (3,6 meters).

“We know that there are alligators in our area, as well as many venomous snakes, so we know not to go there in flood waters. I was just amazed at the size of this alligator, ”she said.

Gulf Shores, Alabama, resident Tina Lambert Bennett discovered a "giant" alligator in the water following Sally. She said alligators are common in the area, but at 11 or 12 feet long, this one was extra large. https://t.co/phVkll7okq pic.twitter.com/fsfwTa00wI

Hurricane Sally, which hit the region on the morning of September 16, first brought strong winds and then wild animals, Bennett said.

“Last night it hit us from the land side, a strong wind tore off part of our roof and caused power outages and other damage. It also caused the surrounding canals to overflow and swamps to fill. Today the tide came from the side of the bay and the water quickly rose from that side. It was then that our property was under water, and the snakes and alligators began to look for a place to settle down, ”she said.

Officials for Santa Rosa County, Florida, are assessing the impact on the county after Hurricane Sally swept through the area.

In a Facebook post from Panhandle County, Public Safety Director Brad Baker said the roads were flooded and trees and power lines were not working. Authorities are seeing increased water levels in the bays and are urging everyone to stay indoors.

According to Baker, emergency vehicles only respond to calls due to floods, high winds and heavy rain in the area.

“We are seeing increased water levels in the bays, so if you get stuck in your house and the water rises, call 911. We also ask you to stay home. Ambulances only respond to flood situations due to high winds and heavy rain, ”Baker said.

Just getting out in Orange Beach, Alabama where we rode out #HurricaneSally - going to start tweeting damage. Internet spotty so bear with me. pic.twitter.com/NSEZQYJWef

At least 377 people were rescued in Escambia County, Florida due to flooding following Hurricane Sully, said Jason Rogers, director of the county's public safety agency. According to him, the ambulance teams "responded to more than 200 calls for help."

For the next three days, the county has a curfew from dusk to dawn. In addition, schools are closed until the end of the week. A curfew was also imposed in Mobile, Alabama, due to a power outage.

Hurricane Sally's strong winds forced a tractor-trailer to flip over on a highway in Mobile Bay, Alabama https://t.co/MAZLohTffI pic.twitter.com/wLYrJhTwKd

From a hurricane to a tropical storm

According to the latest figures from the National Hurricane Center, the Sally system weakened to a tropical storm with winds of 70 mph (112,6 km / h).

Even though Sally is no longer a hurricane, parts of Alabama and Florida still experience "catastrophic and life-threatening floods."

Storm surges and flash floods: Hurricane Sully will bring historic downpours on the US

Tropical storm Sally is looming in the United States: it will become a hurricane when it lands on land