The conflict in Israel and the Gaza Strip is growing: Hamas militants have already fired more than a thousand missiles at Israel, the Israeli army is responding with airstrikes on Gaza, in Israel itself, local Arabs staged pogroms and arson in several places, a state of emergency was declared in the city of Lod, writes Air force. 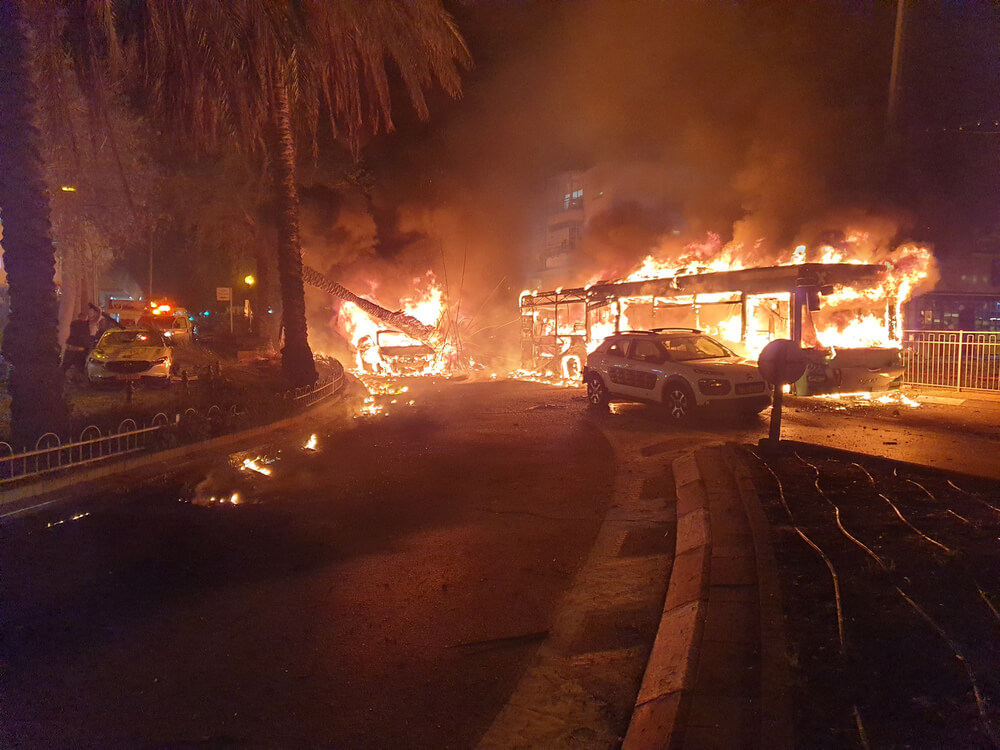 Israeli army spokesman Jonathan Conricus told reporters on Wednesday morning, May 12, that since Monday evening, May 10, more than a thousand rockets have been fired from the Gaza Strip at Israeli cities. 850 of them either exploded on Israeli territory, or were shot down by the Iron Dome air defense system, about 200 more, according to Konricus, fell in the Gaza Strip itself.

Israel is responding with hundreds of missile and airstrikes. The Israeli military assures that they are hitting only on legitimate targets: the sites of missile launch and production, as well as the offices and other locations of Hamas representatives.

On both sides, according to the latest data, more than 40 people were killed: Hamas claims that 43 people died on their territory, including 13 children; in Israel, rockets killed 6 people, including a 16-year-old Arab girl.

The girl and her 52-year-old father were killed on Wednesday morning, 12 May, when a rocket from Gaza hit their car. The girl's mother is seriously injured.

There are at least 250 wounded on both sides.

Hamas is firing rockets not only at the Israeli cities closest to Gaza in the south of the country, but also at the center of Israel, including Tel Aviv.

On Wednesday, May 12, Palestinians hit a military jeep with an anti-tank missile on the border of the Gaza Strip. According to Al-Jazeera TV channel, one Israeli soldier was killed and two were wounded. There are no confirmations or denials from the Israeli side yet.

Pogrom and state of emergency in Lod

Riots broke out in the city of Lod, 20 km from Tel Aviv and in some other places on Tuesday, May 11: according to Israeli press reports, local Arabs began burning cars and shops of Jews and smashing their homes.

The Israeli government declared a state of emergency in Lod and sent border police units there.

Arabs set on fire a Synagogue in Lod city. In this video you can see Jews rescuing Torah scrolls from the burned house of worship. Breaks my heart. 💔 #IsraelUnderAttack # Israel pic.twitter.com/k3TkDsmOuV

On Wednesday, May 12, Lod visited Prime Minister Benjamin Netanyahu early in the morning and promised to restore order.

According to Israeli publications, in addition to Lod, riots in the past day were also in the cities of Ramla, where they set fire to a synagogue, Haifa and Akko, where they burned down a restaurant and a hotel.

The police have already detained about 160 Arabs, who are suspected of participating in the pogroms.

The day before, the Israeli army destroyed the second multi-storey building in Gaza, in which, according to the military, the Hamas facility was located. This is a 12-storey building of "Al-Jawar".

On the subject: Riots continue in Israel: hundreds of victims, fires and rockets from the Gaza Strip

In about an hour and a half, the military warned the civilians of the high-rise buildings and the surrounding area that they needed to urgently evacuate.

Prior to that, on Tuesday, May 11, Israeli planes destroyed the 13-story Burj Khanadi building in Gaza, where the offices of the Hamas movement were located.

Leaders of many countries and international organizations call on the parties to end the conflict.

The UN spokesman for the Middle East, Thor Vennesland, said the situation was slipping into full-scale war.

“We are striking powerful attacks against terrorist organizations and will continue to strike them because they decided to strike Israel. We will return peace and tranquility - for a long time, ”said the Minister of Defense.

OPERATIONAL FOOTAGE: This is the moment we targeted a terrorist squad preparing to launch an explosive UAV from Gaza into Israel. pic.twitter.com/6adNZ5poRd

Hamas leader Ismail Haniya said that if Israel wants to escalate the conflict, then the organization is ready for this.

“And if he wants to stop, we are ready for that. A new balance of forces has been formed, ”the head of Hamas said in a televised address.

Jerusalem again became the reason for a new outbreak of the long-term Arab-Israeli conflict - a city sacred to Jews, Muslims and Christians alike.

The last round of clashes between Israeli police and Palestinians in the city began last week.

Riots initially erupted over an attempt by the Israeli authorities to evict several Palestinian families from the Sheikh Jarr area of ​​East Jerusalem.

Another reason for the protests was the decision of the city authorities to prevent Muslims from entering the Temple Mount during the Jerusalem Day procession, which was celebrated on Monday, May 10.

On the morning of that day, hundreds of Palestinians began throwing stones at members of the Israeli security forces. The police used flash bangs, tear gas and rubber bullets. As a result of the clashes, more than 300 people were injured.

Then the Israeli side began shelling and airstrikes.

At the holiday in Israel, there was a massive crush: 44 dead, more than 100 injured