Today, January 6, the US Congress met in Washington, DC to approve the results of the presidential election. At the same time, numerous supporters of the current US President Donald Trump crowded under the Capitol building, protesting against these results. The situation quickly escalated and turned into chaos. CNN tells what's going on. 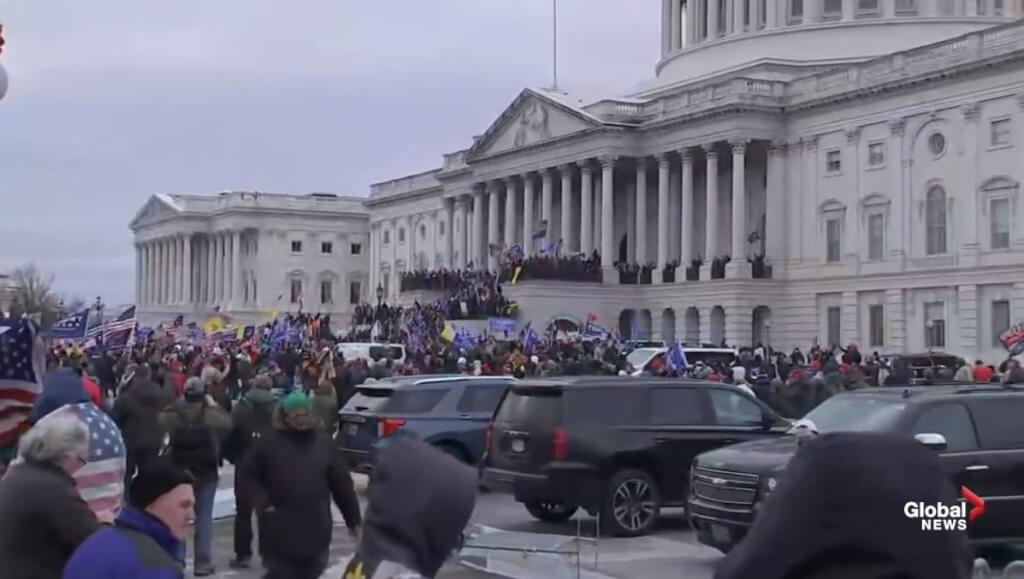 18:10 (EST) January 6: a woman wounded during clashes in the Capitol died, reports NBC... She received a gunshot wound to the chest and was taken to hospital, where doctors pronounced her death. The name of the deceased and the details of the incident are still unknown. In addition, several police officers were injured in the clashes.

Update as of 17:50 pm (EST) January 6: police said the Capitol Building was completely free of protesters and safe for congressmen. At least 20 people were arrested.

Update as of 17:20 pm (EST) January 6: police are gradually regaining control of the Capitol in Washington. Meanwhile, small groups of Trump supporters are gathering outside parliament buildings in other US cities. In particular, protests began in Salem (Oregon) Atlanta and Denver.

Read below about how events developed before.

Demonstrators broke into the Capitol, according to Washington police. The doors to the House of Representatives were locked, and a Capitol police emergency message broadcast the following: "Due to an internal threat in the building, hide in the nearest office and keep quiet." This is how it was.

Shortly after 13:00 pm ET, hundreds of pro-Trump protesters broke through barriers set up around the Capitol, where they fought fully armed officers, some called the officers "traitors" for doing their jobs. After about 90 minutes, the police reported that the demonstrators had entered the building.

Congress went on hiatus, halting the process of certifying the results of the US presidential election. Before riots broke out, Congress confirmed only 12 of 538 electoral votes. The floor of the House of Representatives was evacuated, while gas masks were distributed to lawmakers due to the risk of using tear gas.

On the subject: Republicans in Congress massively refuse to approve of Biden's victory

Vice President Mike Pence, who observed the Electoral College vote, was also evacuated. Representatives from Vice President-elect Kamala Harris' office declined to comment on her whereabouts, but added that she was "safe."

Hundreds of Trump supporters have stormed the barricades at the back of the Capitol and are marching toward the building. pic.twitter.com/68nB7QyiP9

CNN reporter Alex Marquardt described it as chaos. Crowds of protesters climbed the steps and terrace of the building in "significant escalation," he said.

“I see at least half a dozen protesters literally climbing up the walls of the Capitol to get to where their fellow protestors are,” he said.

According to him, the police used several bursts of tear gas. But he added that he had not seen "any sign of law enforcement" from his seat.

BREAKING: Trump supporters have breached the Capitol building, tearing down 4 layers of security fencing and are attempting to occupy the building - fighting federal police who are overrun

This is the craziest thing I've ever seen in my life. Thousands, police can't stop them pic.twitter.com/VVdTUwV5YN

The building is currently under lockdown, Capitol police said. The police are asking for help from the federal authorities.

Another source said there are several suspicious devices outside the Capitol. According to the publication, federal and local law enforcement agencies are responding to reports of possible bombs in several locations in Washington.

Hours after the protests began, law enforcement agencies defused at least two homemade bombs - one in the building that houses the offices of the Republican National Committee and the other in the US Capitol complex, a federal law enforcement official told CNN. The official said they were real explosive devices. 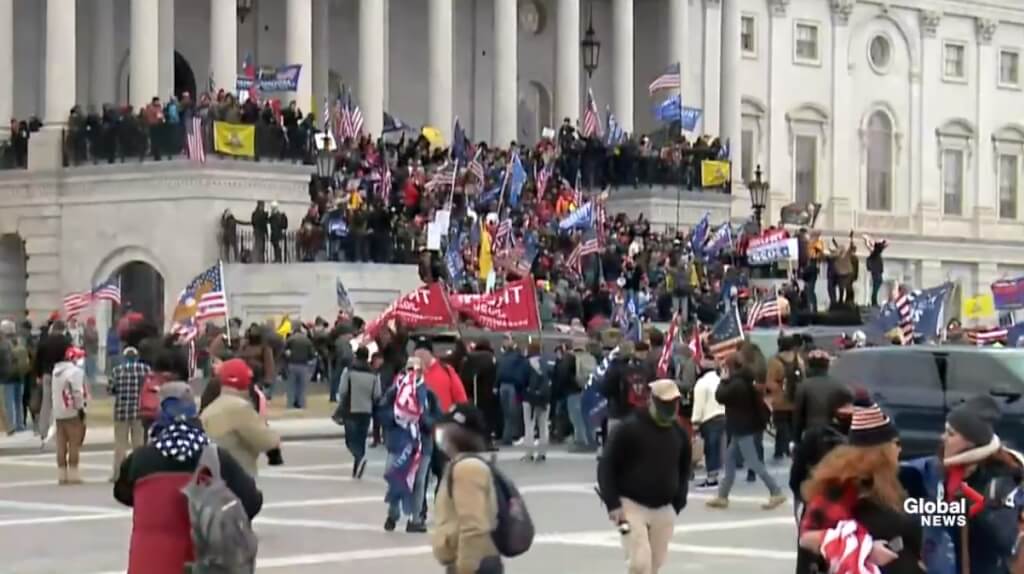 On the subject: Congress is preparing to approve the results of the presidential election: the National Guard mobilized in Washington

DC Mayor Muriel Bowser has imposed a curfew from 18:00 pm to 6:00 am, which she tweeted about.

“During curfew hours, no one except those appointed by the mayor can walk, cycle, run, walk, stand or move by car or other means of transportation,” within the district, the statement said.

Rep. Adam Kinzinger, a Republican from Illinois, tweeted that this is an "attempted coup."

Shortly before the evacuation, an officer in the House Hall told lawmakers that they might have to hide under chairs, adding that protesters had gathered in the rotunda of the US Capitol.

Legislators were told to "be ready" to move into the locker rooms, but "there is no threat to the audience at the moment." The doors were barricaded, but later protesters entered.

I'm currently sheltering in place. The Capitol building has been breached and both chambers are locked down.

This is the chaos and lawlessness @realDonaldTrump has created.pic.twitter.com/RBAi4IW0Fm

President Trump urged protesters to support police and law enforcement in a tweet.

Earlier in the day, Trump called on his supporters to hold a protest outside the US Capitol hours before the storming of the building.

Despite the promise that he would join them, Trump drove to the White House in his SUV and watched on TV as the violence unfolded on Capitol Hill.

“We're going to go down to the Capitol. And we will root for our brave senators, congressmen and women. You have to show strength, and you have to be strong, ”he said at a rally on Ellipse. 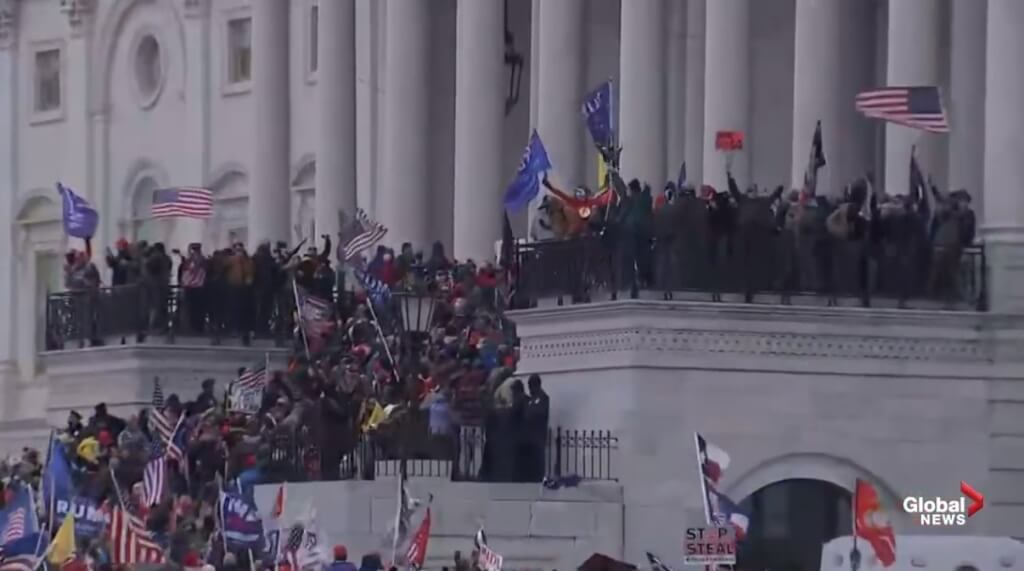 To summarize, Trump has said again that he will join his supporters as they move towards the Capitol.

“I ask everyone in the US Capitol to remain peaceful. No violence! Remember, we are a party of law and order - respect the law and our distinguished men and women in blue. Thank you!"

And here is the president's reaction to the takeover of a state building in Oregon:

“Anarchists, agitators or protesters who desecrate or damage our Federal Courthouse in Portland or any federal buildings in any of our cities or states will be prosecuted under the Statues and Monuments Act, which was recently re-enacted. At least ten years in prison. Do not do that!" 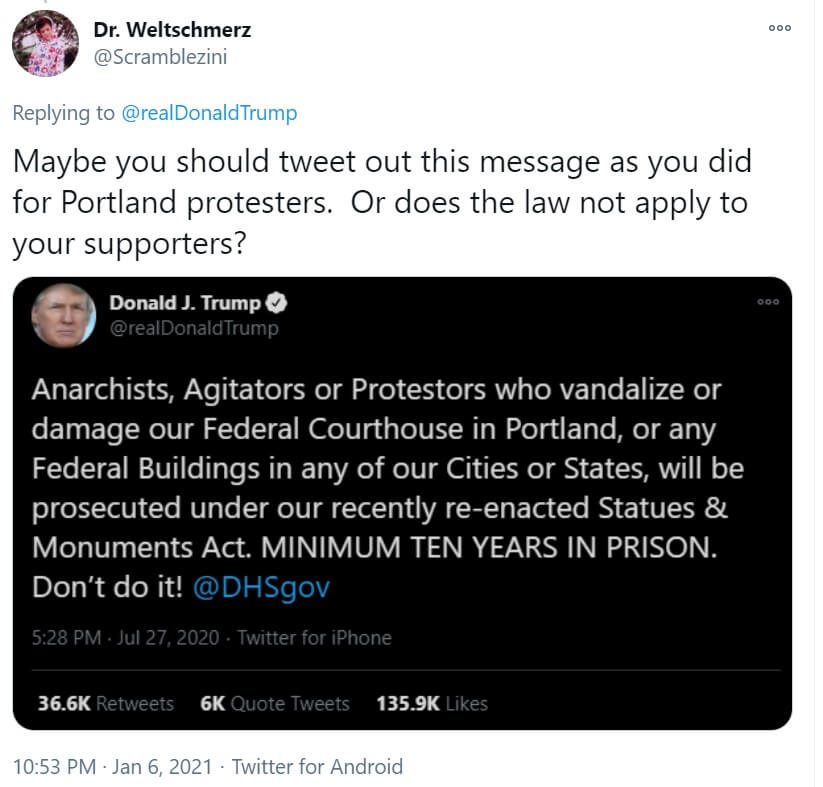 Hours after the protests began, a White House spokeswoman tweeted that Trump had instructed the National Guard and other "federal defense services" to help respond to rioters outside the US Capitol.

“We reiterate President Trump's call to end the violence and keep the peace,” she said.

“If you enter the Capitol building against a police order, you must leave. There is a suitable place to deal with complaints. This is not it. "

According to the latest reports, one woman is in critical condition after being shot in the chest on the territory of the Capitol.

Biden spoke in response to the Capitol situation, calling the riots an “attack” on democracy.

“At this hour, our democracy is under an unprecedented attack. Unlike everything that we have seen in our time. The attack on the citadel of freedom, the Capitol itself. An attack on the representatives of the people and the Capitol Hill police, vowed to protect them. And the civil servants who work in the very heart of our Republic ... Let me be clear. The chaos in the Capitol does not represent true America. They have no idea who we are. What we see is a small number of extremists committed to lawlessness. This is not dissent. It's a mess. It's chaos. It borders on undermining the insurgency. And it needs to end right now, ”Biden said.

Biden: 'This is not dissent, it's disorder, it's chaos. It borders on sedition. And it must end now. I call on this mob to pull back and allow the work of democracy to go forward ' pic.twitter.com/UjLPSTzvUD