Home In the U.S. “Wake up and your house burned down”: California fires destroy movie star estates. A PHOTO

“Wake up and your house burned down”: California fires destroy movie star estates. A PHOTO

Wildfires in California have reached the bohemian areas of the state, where many film actors and singers are located. TV series star and singer Miley Cyrus, the famous Gerard Butler - who starred in "300", and the Canadian singer Neil Young - this is not a complete list of stars who have lost their luxury homes.

California Fire in November this year - the most destructive in the history of the state and the record for the number of victims. At the moment, 31 dead are known, recalls Air force.

The city of Paradise in the north of the state was almost completely destroyed by fire. The fires also swept the cities of Malibu and Calabasas, home to many Hollywood stars and famous musicians.

Yesterday we wrote that Kim Kardashian, Lady Gaga, Alyssa Milano and many other stars were among those who were forced to flee their homes due to wildfires raging in Southern California - wildfires forced to evacuate not only ordinary residents of the state, but also celebrities. Some had to leave in an hour, while others were given only 10-15 minutes to get ready (the link above - a lot of photos!).

Later, some of the stars were horrified to learn that only a heap of ash remained from their luxury real estate. 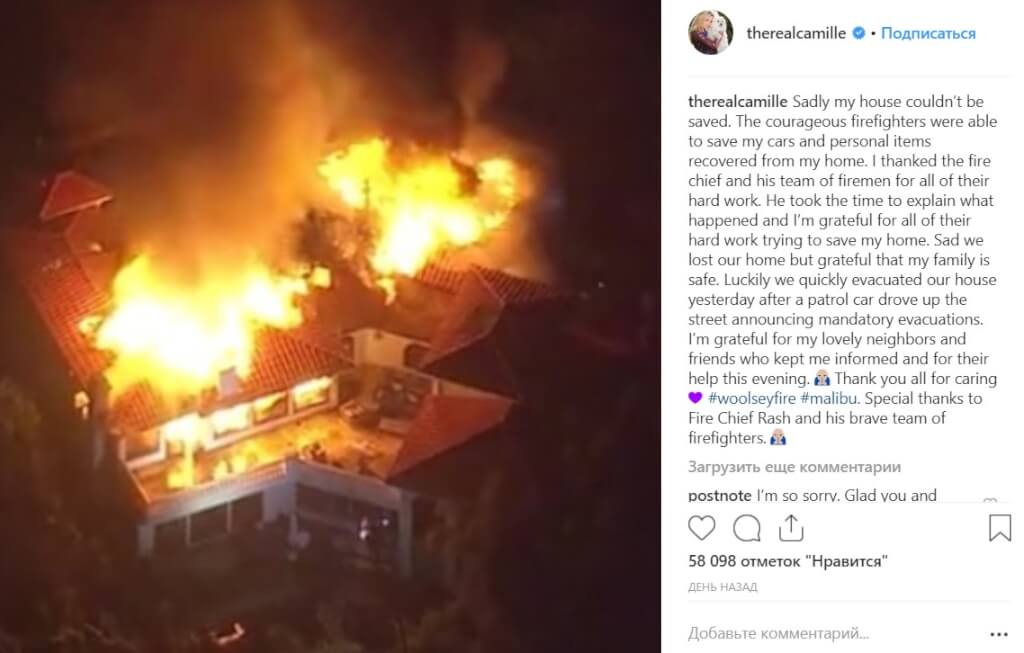 Among those whose house burned down was the Hollywood actor Gerard Butler. On his Twitter account, he posted a selfie in front of the ashes.

“Returned to my home in Malibu after evacuation. Terrible time for California, ”wrote Butler, thanking the California firefighters for their courage, high spirit and sacrifice. 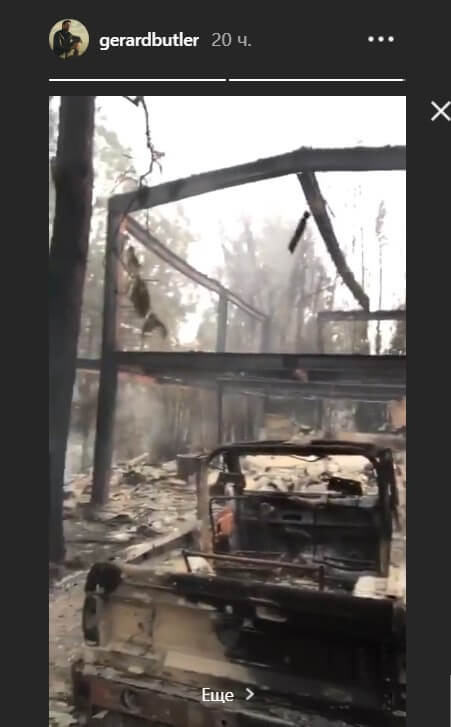 The flames also completely destroyed the home of American musician Robin Thicke. On his Instagram, he posted a video from the car in which he and his family left the city, and shortly after that his girlfriend, April Love Gehry, wrote: “Our house is no more”. Photos of Teak's burnt house appeared in the press. 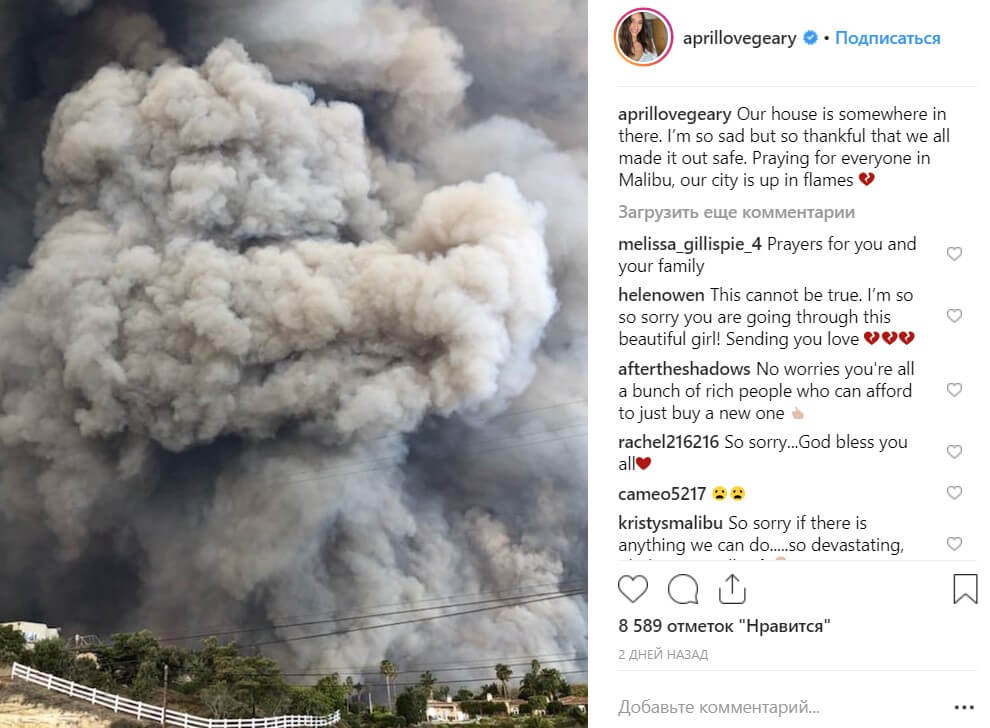 The Canadian musician Neil Young, who on his website attacked President Donald Trump, was deprived of his property in Malibu, accusing him of being indifferent to the problem of global warming.

“California is not suffering from poor forestry, as D.T. (our so-called president) ... We are suffering from climate change; extreme weather conditions and prolonged droughts are part of the process, ”he wrote.

Fred Durst, the founder and vocalist of the group Limp Bizkit, reported on his burned house with humor.

“When you wake up, and your house burned down, but you still managed to save a chair, a thermos and a racket,” he signed a meme on his Instagram, published in the “story” section. 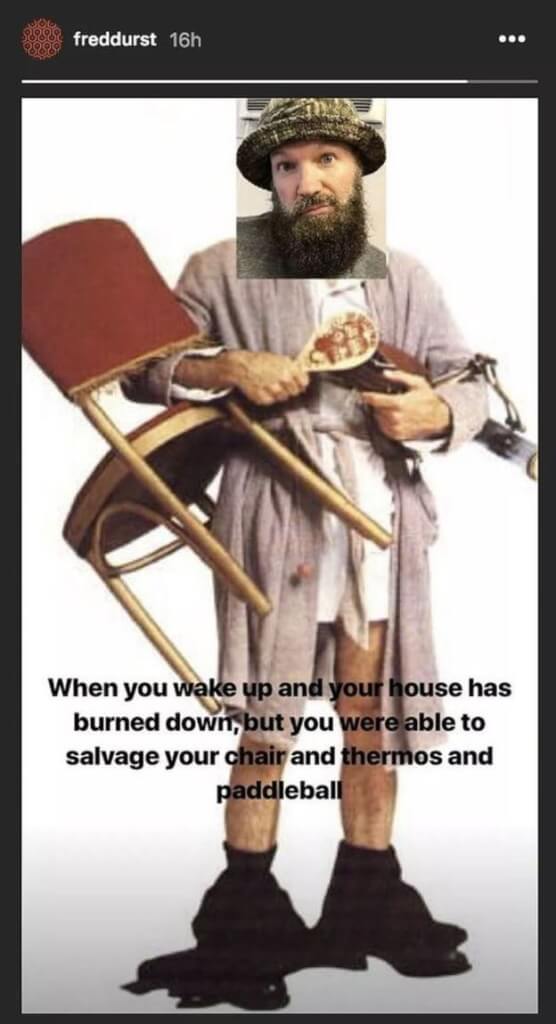 Singer Miley Cyrus also spoke about the loss of the house with a bit of optimism.

“I feel completely devastated by the fires in my area. But I was lucky. My animals and the love of my life are safe, and that's the only thing that matters right now. My home is gone, but the memories of the time spent there with friends and family will remain forever, ”she tweeted, thanking the firefighters for their dedicated work and encouraging everyone to make donations to the victims. 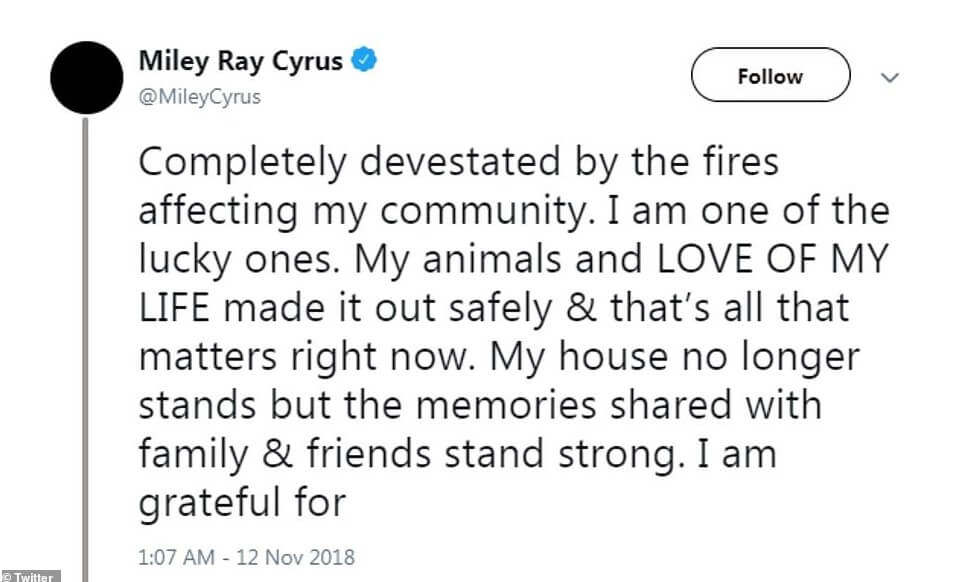 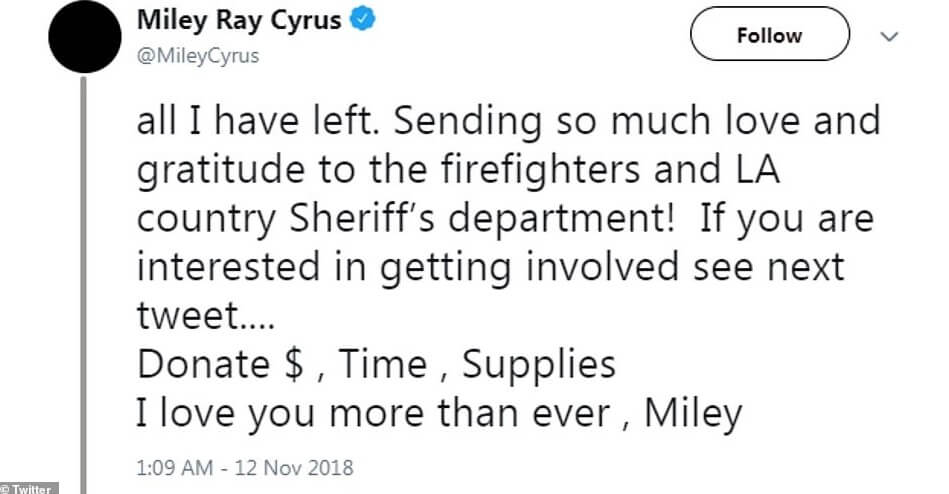 Film director Scott Derrickson published photos of the ashes on the site of his house, accompanying them with gratitude to those who supported him in a difficult moment. Following this, he wrote a philosophical post:

“I’m not trying to be optimistic by literally losing everything — I’m just not a materialist by nature. For me, these are just things. It's harder for my sons who have lost family memorabilia. But this loss and sharp turn will be a source of growth for all of us. ”

However, some stars were more fortunate: according to the latest data, the mansions of the singer Lady Gaga, TV presenter Caitlin Jenner and photo models Kim Kardashian bypassed the fire (news that their houses were burned, appeared one of the first, but have not yet been confirmed).

On Sunday evening, mandatory evacuation orders were issued for the city of Calabasas, where almost the entire Kardashian family lives, but Kim, Kanye and Courtney left before the warnings. 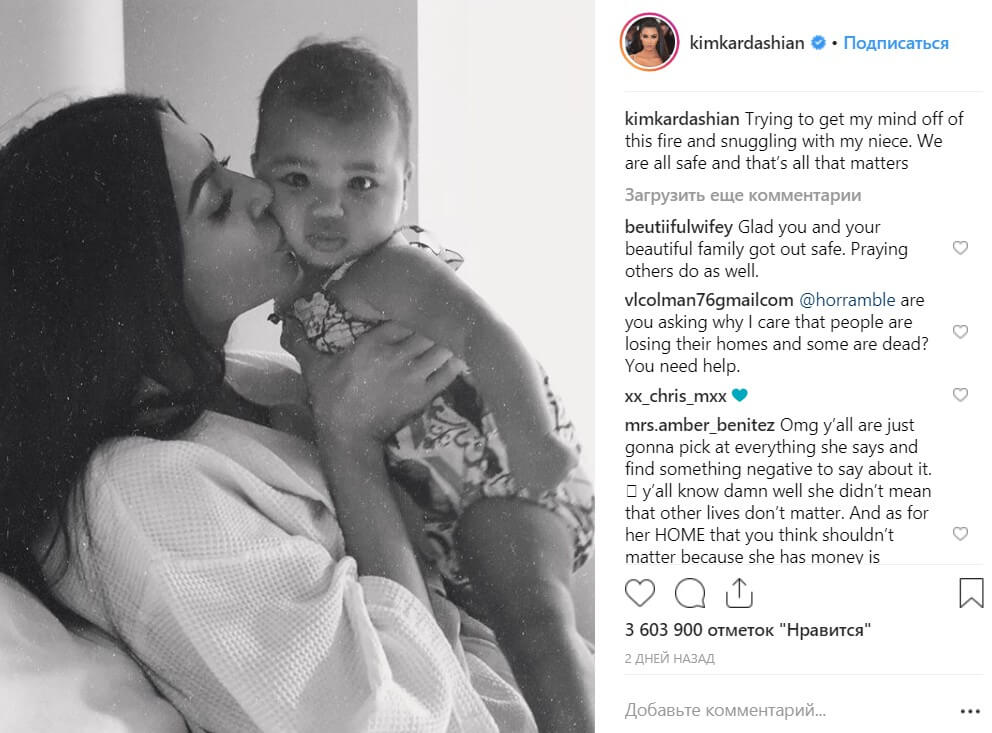 Kim Kardashian and three children were forced to evacuate in just an hour. The reality TV star immediately flew home from filming to collect things and go with sister Kendall to a safe place with her children. Courtney left the house in Calabasas and went there, to Beverly Hills, having published a photo of the things packed in the trunk of the car before the trip. 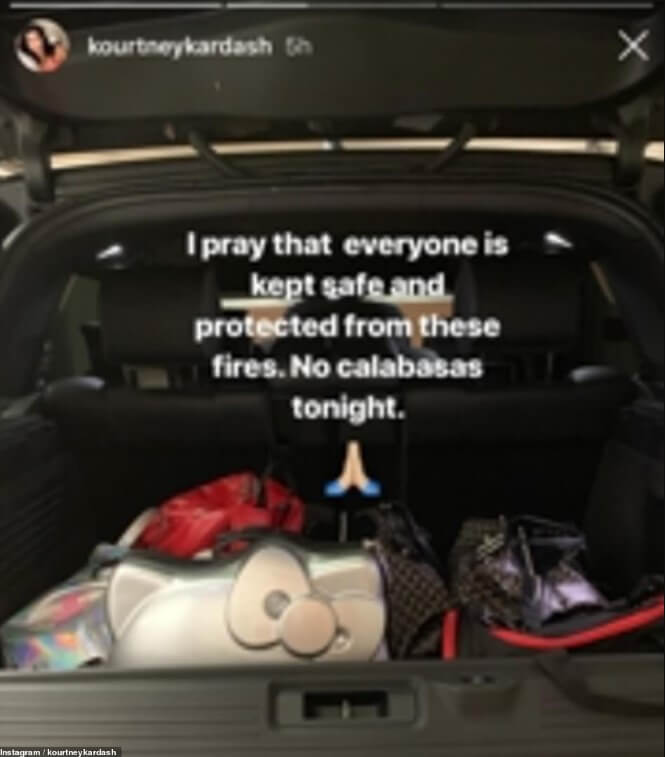 During the evacuation, many Californians temporarily lost contact with their relatives. Hollywood actor Charlie Sheen found himself in such a position, who turned to Twitter users with a desperate request to inform him of any news about the whereabouts of his parents, with whom he could not contact. Later, Charlie's father, actor Martin Sheen, announced that he and his wife were safe in the Zuma Beach area.

Other celebrities wrote about the fire in their social networks. “I am worried about my home, but I can’t do anything. Friends' houses burned down. I can't get away from the thought that there is no more Malibu, I have had a house in Malibu since 1972 "- singer Cher. 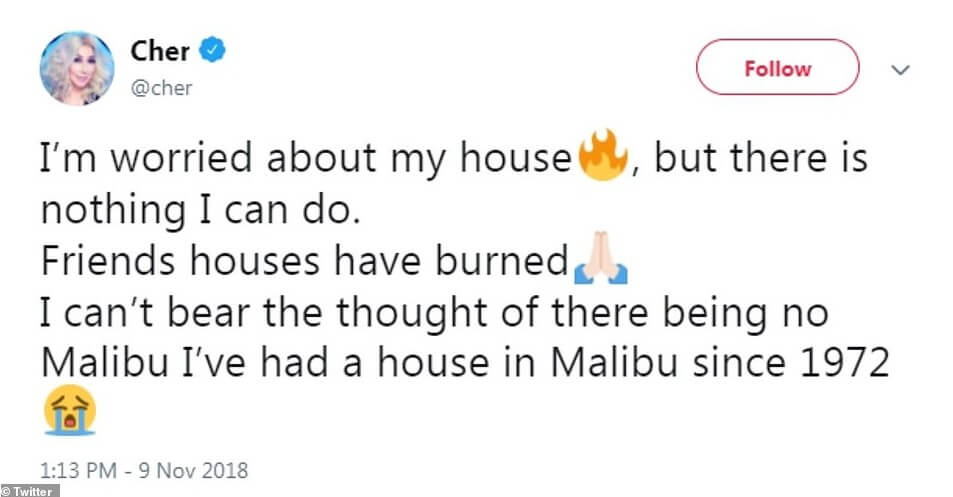 Alyssa Milano thanked the firefighters for their help - her house survived, and 5 horses survived (yesterday, the star asked through social networks to help with the evacuation of animals).

Lady Gaga also thanked the firefighters for risking their lives and called them heroes.

Director Guillemo del Toro wrote that his house survived - he returned to pick up some valuable photos, books and belongings, and then left for Los Angeles again. 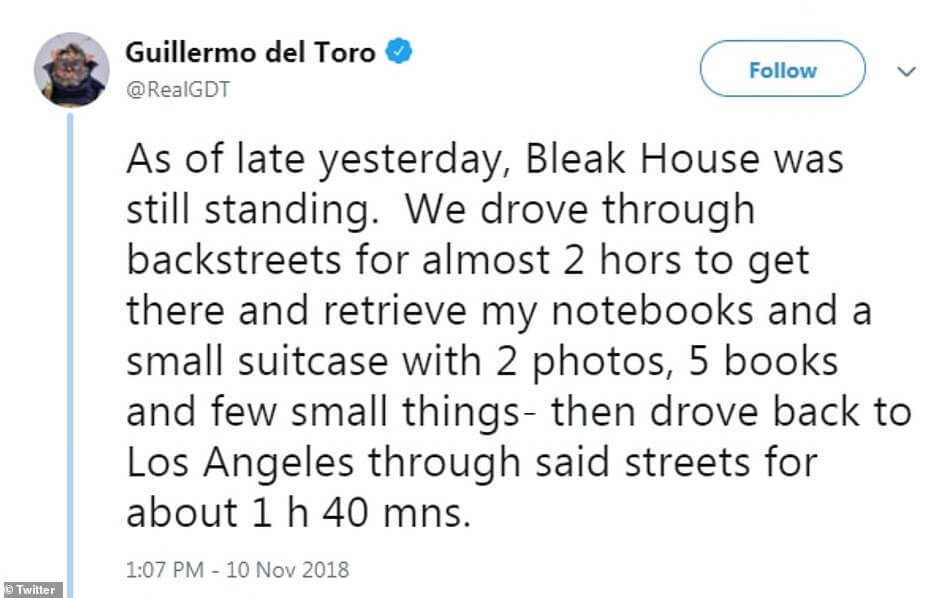 Mayor Gary Lysick said in a statement: "Everyone in the city of Calabasas must evacuate."

“For your safety and the safety of your family, please collect the necessary personal belongings and leave the city as soon as possible, and follow the instructions provided by law enforcement agencies.”

A trip through hell: a family shot a terrifying video of a California fire escape

Americans chipped in a new restaurant veteran after the fire

The TV channel “moved” the studio to a burning forest to show the danger of forest fires. VIDEO