Home In the U.S. California fires: thousands evacuated, one killed, state resources at the limit

The onslaught of wildfires raging across California was fatal as thousands of firefighters fought to contain 23 major complex fires across the state. NPR. 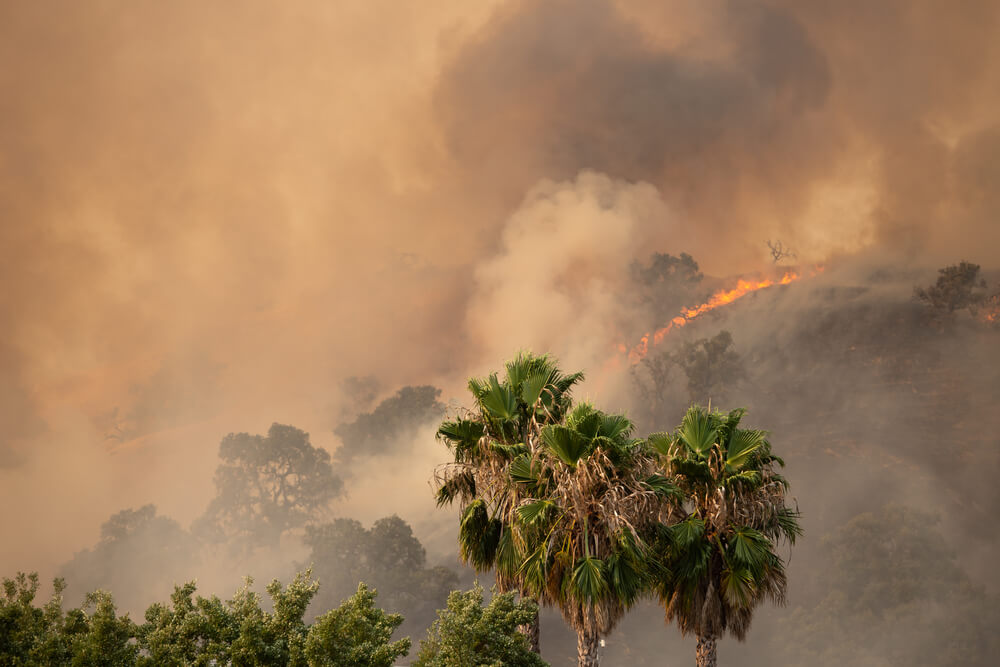 A helicopter pilot who fought one of the state's small fires in central California was killed in the crash, according to the Department of Forestry and Fire (Cal Fire).

"This morning, a Call When Needed helicopter crashed while fighting a wildfire in West Fresno County," the agency said.

A Bell UH-IH helicopter was on a mission to drop water on the Hills Fire during an accident.

“The pilot was the only person aboard the helicopter and did not survive the incident,” the agency said.

The helicopter was one of six firefighters in Fresno County, which was difficult to reach due to steep slopes and limited access, according to Cal Fire officials. 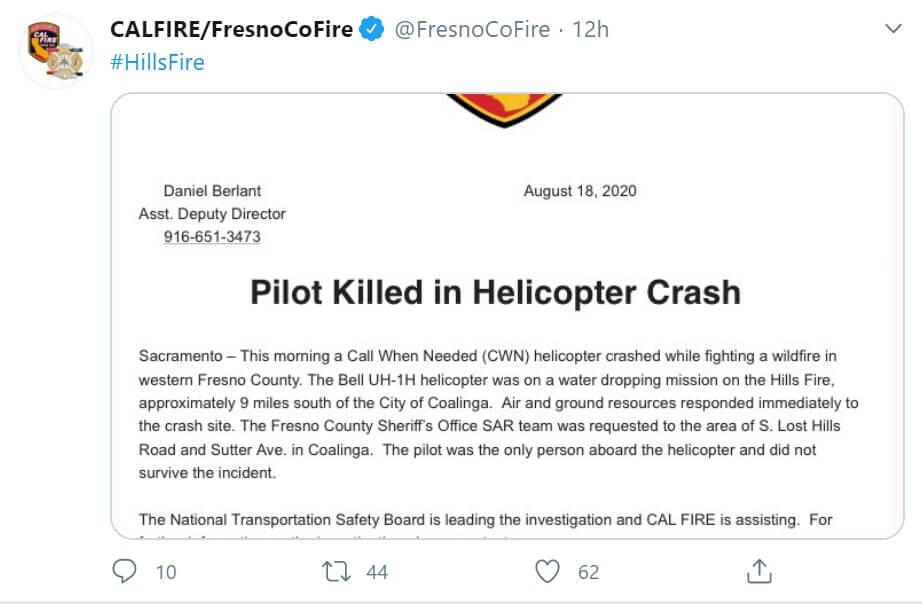 The tragedy came after a series of lightning strikes against the backdrop of intense heat, which simultaneously caused hundreds of fires throughout California, exhausting the state's resources to the limit.

According to Cal Fire, as of Wednesday afternoon, Aug. 19, about 6900 firefighters from federal, state and local agencies have been called in to fight the flames that have engulfed both agricultural and residential areas.

On the subject: Fires, fire tornadoes, evacuations: state of emergency declared in California due to large-scale natural disaster

The lightning and thunderstorms that began on Sunday 16 August, combined with extremely high temperatures and dangerous air quality, exacerbated the fires' ferocity and speed. This prompted the evacuation of thousands of people as rescue teams tried to prevent fires from devastating entire neighborhoods.

“Over the past 72 hours, the state has been hit by a historic lightning siege that has resulted in approximately 10 lightning strikes across the state, causing more than 849 new fires,” said Jeremy Rahn, Cal Fire Public Information Officer for the LNU Lightning Complex.

Currently there are 367 #CaliforniaFires - this one in Napa County pic.twitter.com/RNGxZpbN9x

“Firefighting resources are depleted,” Ran stated. "The size and complexity of these incidents challenge all aspects of emergency response."

“So far, California has requested 375 fire engines from neighboring states and has hired nearly all available private jets to fire in the western US,” he said.

In total, the fire service employees identified 23 large complex fires - these are separate, scattered foci that burn in a specific geographic area in close proximity to each other.

During his briefing, Gov. Gavin Newsom noted the uniqueness of the crisis the state is facing in the current extreme weather conditions.

“We're dealing with fires like we haven't seen in years,” Newsom said.

On Tuesday, August 18, the governor declared a state of emergency, clearing the way for easier federal grants and out-of-state aid to put out the elements of fire.

The LNU Lightning Complex fire consists of multiple outbreaks in Napa and Sonoma counties. The rapidly spreading flames burned over 46 acres (000 ha) and destroyed or damaged about 18 buildings, according to Cal Fire. Fires are localized by 615%.

“A wall of fire swept through Spanish Flat Mobile Ville, turning houses to ash, cars to piles of molten metal,” according to the Bay Area branch of CBS.

Near the wine-growing region, fires destroyed more than 85 acres (000 hectares) of land in five counties. The ignition, which is believed to have originated from dry lightning, began on Tuesday morning, August 34, and has now spread to Santa Clara, Alameda, Contra Costa, San Joaquin and Stanislav counties. The fire is localized only 398%.

In California, fires are raging and a heat wave is causing shortages to the grid. 367 new fires last night. Over 300,000 acres burned.

We're in a #climatecrisis... Let's do something about it. #ActOnClimate #climate #energy #renewables #GreenNewDeal #JustRecovery pic.twitter.com/w7krCrdRjL

The CZU August Lightning fire blazes along the coastline in San Mateo and Santa Cruz counties.

“High nighttime temperatures and limited resources have increased the extent of the fire, which has now reached 10 acres (000 ha),” Cal Fire said.

Meanwhile, Southern California is battling three large fires that have burned out about 73 acres (200 ha) and threaten hundreds of residential areas.

While Newsom admitted that firefighters are "involved in a way we haven't seen in years," he dismissed criticism that the state is not prepared for the onslaught of wildfires.

The Governor noted the extensive collaboration with the Federal Emergency Management Agency (FEMA), as well as other states, including Arizona and Texas, that has been established over the years to combat such disasters.

“We were preparing for this,” Newsom said.

Earlier this year, he said, the state legislature approved an additional $ 85,6 million increase in the Cal Fire budget "to attract a permanent firefighting force," despite the tightening of economic "belts" caused by the coronavirus pandemic.

The governor said that an additional 830 firefighters have been hired to fight active wildfires in the past few weeks. Help is expected to arrive from Texas.

Fires also cover vast areas of the state with harmful smoke and ash, forcing many people to stay indoors. The disaster also puts stress on the state's energy infrastructure, which is already overloaded as the heatwave triggered rolling blackouts.

You can't see it but it's raining ashes…. #californiafires pic.twitter.com/mJWVI3lF01

According to the National Meteorological Service, high temperatures are expected to persist until the end of the week (22-23 Aug).

Another unexpected complication posed by the coronavirus pandemic is the need to decide where to send people who have been evacuated from their homes. State health and safety regulations require evacuees not to be crowded into enclosed spaces, as is usually the case when people are going through an emergency.

Colorado is raging with terrible forest fires: smoke enveloped the entire state and is visible from space

Electricity cut off in California in record heat: the governor demands an investigation

Fires, evacuations, power outages: California was hit by a thunderstorm with hundreds of lightning

The highest temperature on Earth: a new record was recorded in Death Valley