Home At home Fire in a shopping center in Kemerovo: what is known after a day

Fire in a shopping center in Kemerovo: what is known after a day

A popular gathering was held in Kemerovo, which brought together several thousand people. The enraged townspeople, who do not believe the official estimates of the death toll at the local Zimnyaya Vishnya shopping center, managed to get officials to let them not only into the central square, but also into the morgue. They responded by accusing them of wanting to promote on The death of 64 people. Also there was a video of the beginning of the fire.

According to the Interfax correspondent, at least 300 people gathered on the Sovetov Square, however, on the footage of the video broadcasts, you can see that much more people gathered, writes “Medusa".

The townspeople demanded that the authorities tell the truth about the fire - many do not believe in the official number of victims of the tragedy. Others complain that a small number of rescuers were working to extinguish the fire.

When the vice-governor of the Kemerovo region Sergey Tsivilev came out to the audience, the crowd greeted him with shouts of "Truth!", "Resign!", "Murderers!"

In the full version of the episode with Deputy Governor Sergei Tsivilev, it can be seen that the official first said about “promoting the tragedy,” after which he knelt down.

Careful. In the video obscene language.

Mayor of Kemerovo Ilya Seredyuk suggested that citizens create a group that will examine the morgues and the burnt down building of the shopping center.

“If you don't believe in the official figures, let's gather a group and go to the morgue. If you want to enter the building, let's create a group, ”he said, commenting on rumors that appeared on social networks about the allegedly low death toll.

According to a Meduza correspondent from the scene, the protesters agreed to independently calculate the number of victims of the fire in the shopping center - residents will send data on the victims to a general email address.

After that, those gathered at the rally demanded that Russian President Vladimir Putin come out to them, who flew 27 March to Kemerovo.

“Where is the king? He was recently elected, let him come here and answer! ”,“ There are just real people, and not painted, as in the elections, ”rushed from the ranks of the protesters. Those who came also remembered that the president did not declare national mourning because of the fire.

The president did not appear at the rally, but it is known that he laid flowers at the memorial to the victims and held a meeting with security officials dedicated to the elimination of the consequences of a fire.

In addition, he visited the victims in the hospital and met with a group of relatives of the victims. Putin urged them not to trust the information spread in social networks about a large number of victims of the fire in Kemerovo.

National mourning in Russia was declared the day of March 27, on the third day after the fire.

The beginning of the fire could be filmed

Telegram channel Mash published a video from surveillance cameras, which shows how the fire starts in a shopping center. The video shows signs of editing; how reliable it is, it is not clear. Judging by the shots, the fire spread very quickly, and people fled from him in a panic.

The head of the Investigative Committee, Alexander Bastrykin, at a meeting with the president, said that employees of the Zimnyaya Vishnya shopping center in Kemerovo had fled the building after the fire broke out, leaving their children and parents there, including those locked in cinemas.

“The main staff fled. Left to the mercy of children and parents. Those workers who should be responsible for security, for organizing the evacuation - they all fled first. There are practically no losses from the staff of the shopping center, ”the head of the UK said.

He also said that the alarm system in the shopping center did not work with 19 March.

Among the probable causes of the fire, Bastrykin named "spontaneous combustion of an electrician that was shorted." "Or this is a version in which we believe less - the use of open fire," - said the head of the UK.

Currently, the investigation is identifying all the culprits from among the administration of the shopping center, who was responsible for ensuring security in the building and “who closed the doors in the cinema halls”.

Earlier it was reported that in the framework of the investigation of the criminal case of a fire, 5 people were detained, including a PSC employee who turned off the fire warning system at the time of the fire.

The fire in the Zimnyaya Vishnya shopping center in Kemerovo began on the afternoon of March 25. By last official data, a fire killed 64 people, several dozen suffered. In the hospitals, as of the morning of March 27, there were 13 victims of the fire, the condition of one of them, the 11-year-old child, was assessed by doctors as grave. In social networks, messages are actively spreading that in fact several hundred people have become victims of the fire.

In different cities of Russia and in other countries, people continue to bring flowers and toys to the Russian embassy. 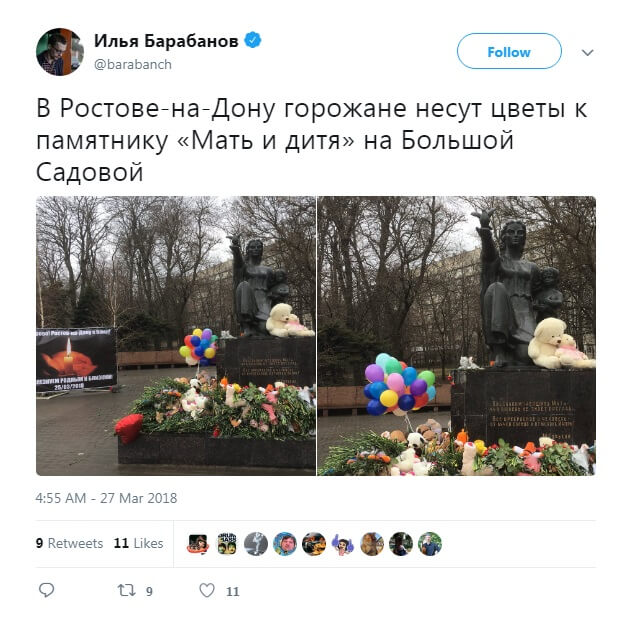 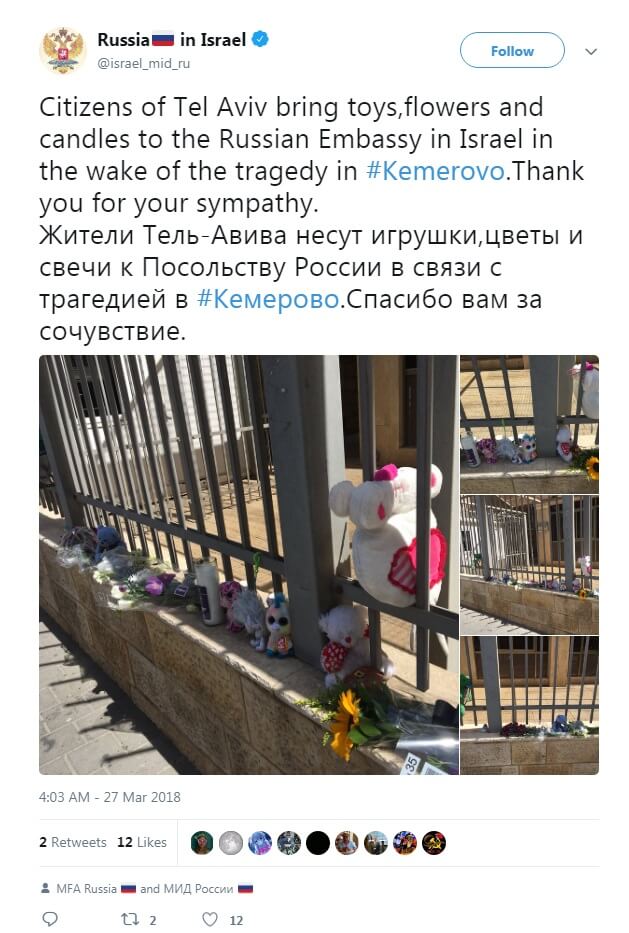 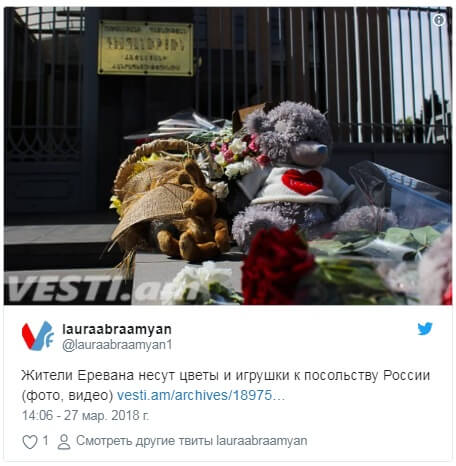 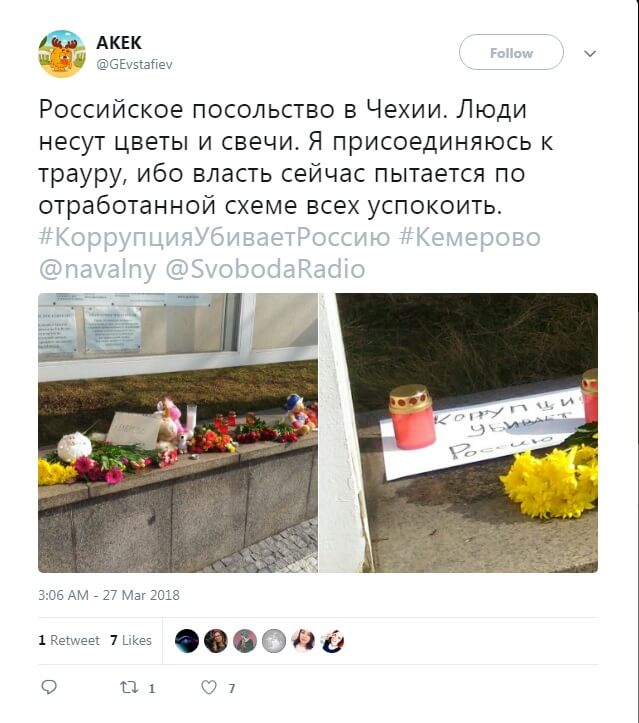 In Perm, solidarity with the relatives of the victims was expressed in three posters - as in the film "Three billboards on the border of Ebbing, Missouri." 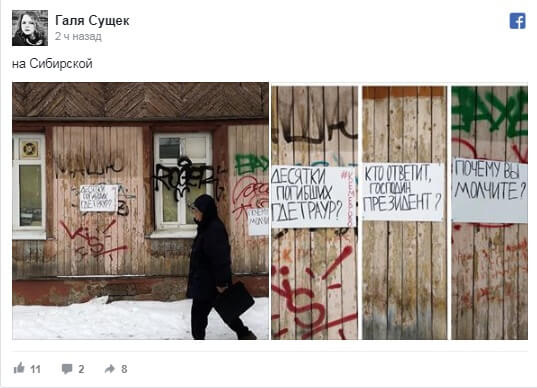 In Odessa, flowers and candles were brought to the Russian consulate in memory of those killed in Kemerovo. 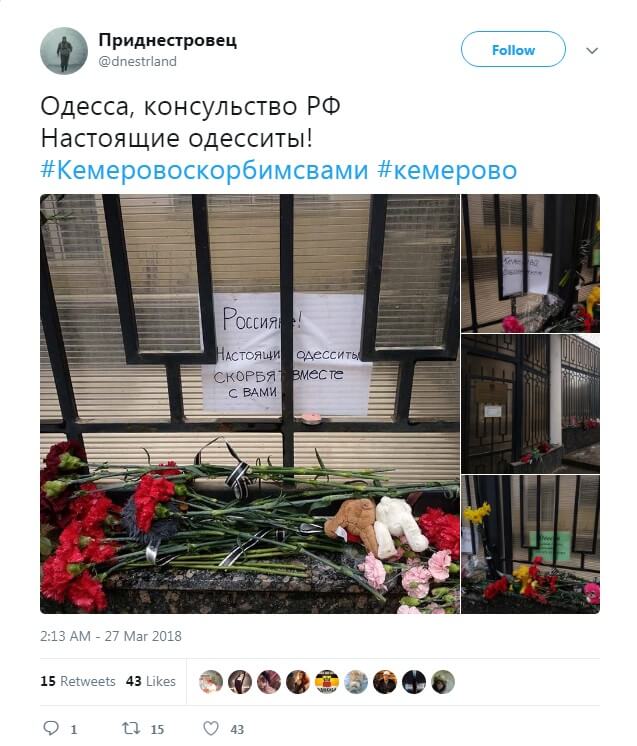 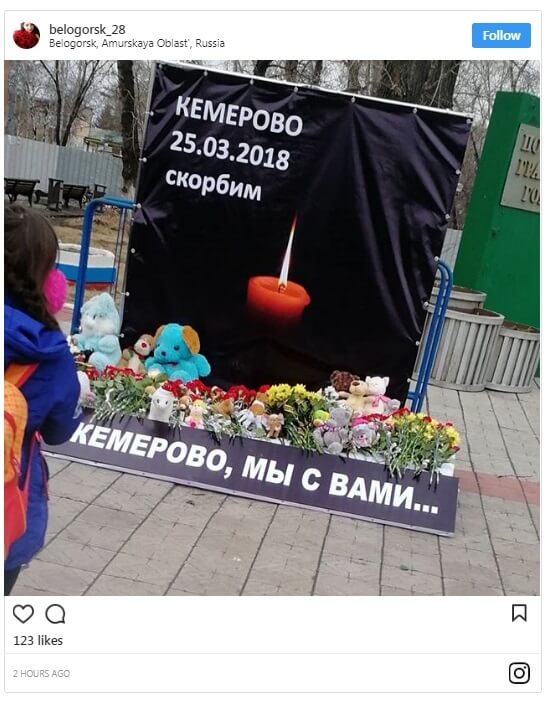 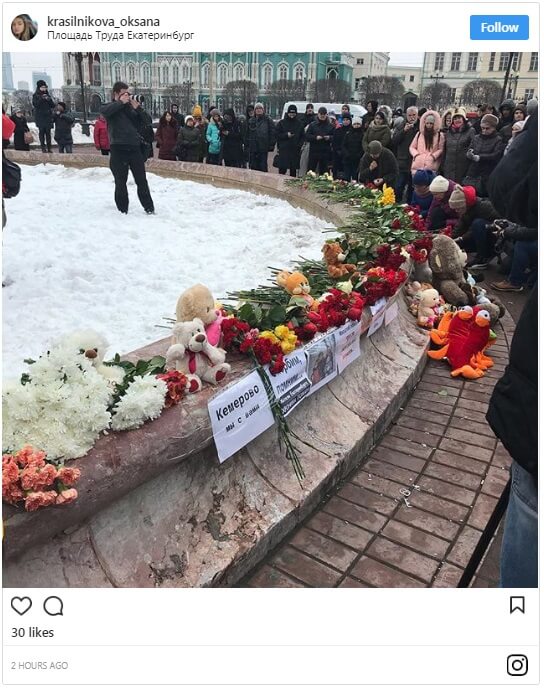 One of the first actions took place today in Magadan. 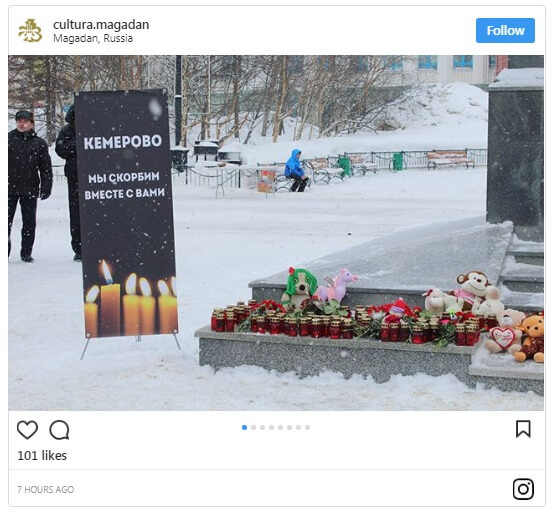 How many actually died in the Kemerovo cinema: data cashiers

The fire in the Russian shopping center killed more than 60 people and 200 animals: what happened