After nearly three years and millions of dollars spent, the investigation into President Donald Trump's collusion with Russia is nearing completion. But new data could take its place, indicating another attempt at foreign interference in the 2016 presidential election - this time in favor of the Democrats, writes in his column for The Hill investigative journalist John Solomon.

Ukraine’s Prosecutor General Yury Lutsenko, in an interview with Hill.TV, said that he had launched an investigation into whether leak of financial reports of the Party of Regions in 2016 about deals with the then chairman of the Trump campaign, Paul Manafort, deliberate, and whether Ukrainian law enforcement agencies were trying to influence the US presidential campaign in favor of Hillary Clinton. Suspicion was caused by the fact that this leak clearly coincided with the election race in the United States.

The leak of the so-called “black book” files of Viktor Yanukovych to the American press led to the resignation of Manafort from Trump's headquarters, and also formed the basis of one of the key accusations in the investigation of Trump's conspiracy with Russia, which has been pursuing the US President for the past two and a half years.

Investigation of Lutsenko began after the Ukrainian parliamentarian released an audio recording, which allegedly heard the voice of a high-ranking employee of the Ukrainian law enforcement agencies, and he says that his department merged financial reports relating to Manafort to help ex-Secretary of State Hillary Clinton's staff.

The parliamentarian also secured a court ruling that the leak was “an unlawful interference with the American election campaign,” Lutsenko said. According to the Prosecutor General of Ukraine, the audio recording is quite a serious reason for opening an investigation, one of the points of which will also be that Ukrainian law enforcement agencies during the presidency of Barack Obama had frequent contacts with the US Embassy in Kiev.

“Today we are starting a criminal investigation on this matter and will give a legal assessment of this information,” Lutsenko said.

Before becoming general prosecutor, Lutsenko was one of the main activists who opposed Russia's influence on Ukrainian politics during the reign of former President of Ukraine Viktor Yanukovich, who had close ties with Moscow. He became attorney general in 2016 in the context of anti-corruption reforms initiated by the current president of Ukraine, Petro Poroshenko, an ally of the United States and Western countries.

In contrast to the hasty start of an investigation into Trump's conspiracy with Russia, when politicians and the media inflated a Watergate-sized crisis before convincing evidence was obtained and the investigation was completed, a possible Ukrainian intervention should be investigated before a scandal is inflated.

After all, Ukraine is faced with widespread corruption, and has become the target of the dirty tricks of Russian President Vladimir Putin. Moreover, this is a country that only last year falsified the death of a journalist for one day in order to prevent the conspiracy to kill.

But the Ukrainian Attorney General, a member of parliament and the court, appear to have enough evidence to initiate a serious investigation and analysis of the recording.

In addition, information about how the files about Manaforte from the “black book” of Yanukovych got into the American media has not been disclosed. They surfaced two years after the FBI launched an investigation into Manafort’s activities in Ukraine, but in 2014, the case was closed due to lack of evidence.

We now have strong evidence that the former British spy Christopher Steele began his investigation, which ultimately led to the creation of Trump's infamous record with Russia, with a series of conversations with Justice Department senior officer Bruce Orom between December 2015 to February 2016, on the subject of evidence against Manafort.

We know that the FBI has opened an office at the US Embassy in Kiev to help investigate Manafort's activities in Ukraine - a common practice in foreign investigations. At the same time, the FBI used Steele as an informant at the beginning of the investigation into Russian interference in the US elections. We also know that the Clinton headquarters used a third-party law firm to pay for the services of an organization collecting information about opponents, which, among other things, received information from Steele. Clinton's staff thus hoped to prevent Trump from winning the presidential election, while at the same time Steele was helping the FBI.

These intersections, combined with new statements by the Prosecutor General of Ukraine, are sufficient reason to start a serious and thorough investigation of Ukraine’s possible interference in the US presidential election.

If Ukrainian law enforcement officials, who often worked with the US embassy, ​​really leaked documents related to Manafort in an attempt to influence the American elections in favor of Clinton, the public deserves to know who and what was known about it at that time.

The interview with Lutsenko Hill.TV revealed another alarming moment: the US Embassy and the Prosecutor General of Ukraine, on which America is pinning its hopes on fighting corruption in a union country, currently have dysfunctional relations.

During the interview, Lutsenko accused the US Embassy in 2016’s Obama era of interfering with his anti-corruption investigations, stating that the US ambassador had provided him with a list of people he should not pursue, and then refused to cooperate early in the investigation of the misappropriation of US financial assistance in Ukraine.

During the conversation, Lutsenko showed a letter from the US Embassy, ​​which confirms part of his statements. From the document it follows that a US official really asked him to stop the case of misappropriation of funds allocated to Ukraine as American aid.

"We are seriously concerned about this investigation, for which we see no basis," a spokesman for the US prosecutor's office named George Kent wrote to Lutsenko. 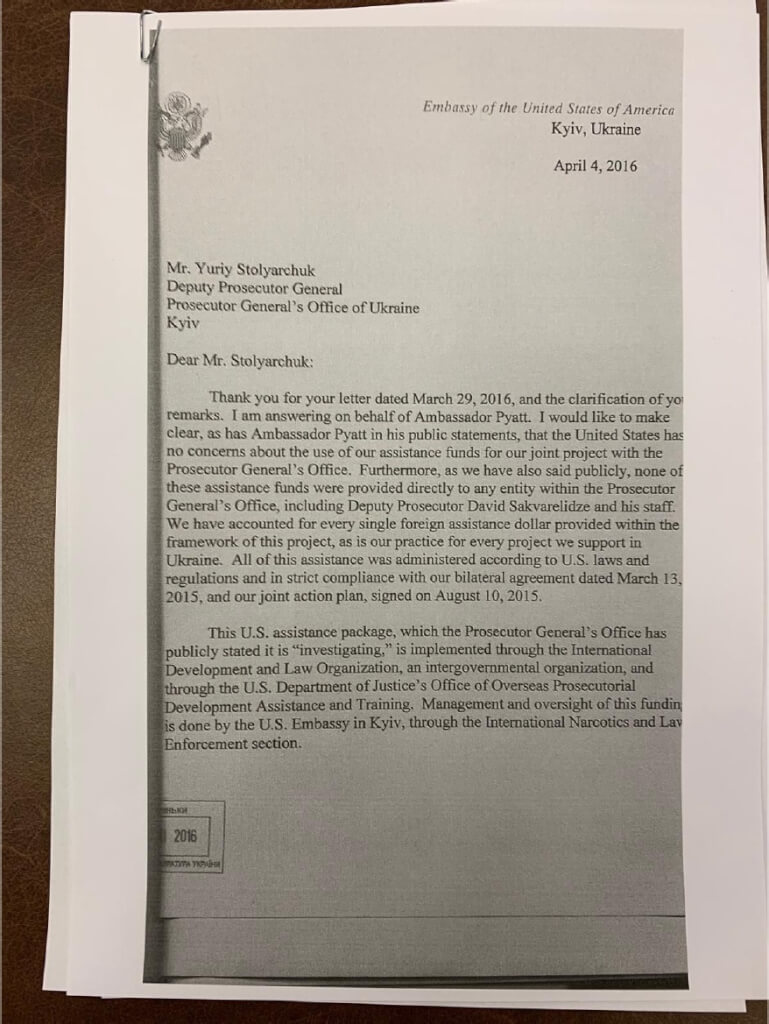 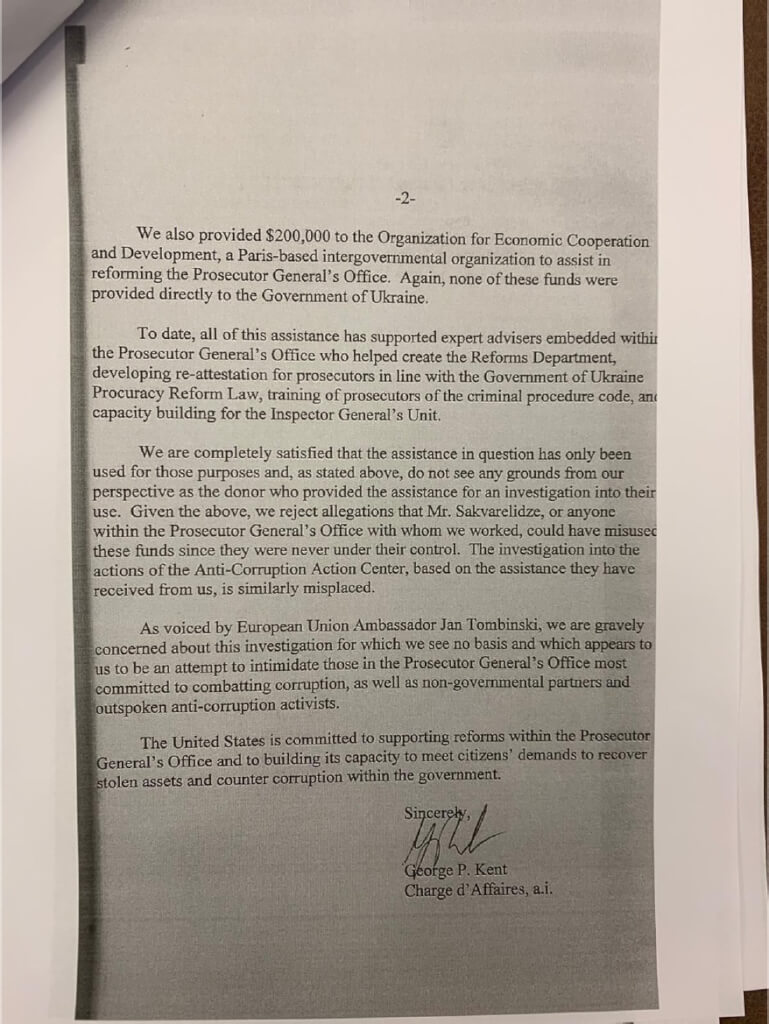 The US State Department 20 March issued a statement saying that the agency no longer provides financial support to the Prosecutor General’s Office of Ukraine in its anti-corruption mission. In addition, the State Department stated that Lutsenko’s words about the list of people whom the Americans allegedly asked not to prosecute are “outright falsification”.

However, there is evidence that Lutsenko is not the only one who complains about the US Embassy in Kiev.

Last year, member of the US House of Representatives Pete Peters (a Republican from Texas), who at that time served as chairman of the Rules Committee, wrote a personal letter to Secretary of State Mike Pompeo asking him to withdraw the current US ambassador to Ukraine Marie Yovanovitch, claiming that she made scornful statements about President Trump.

According to him, the ambassador "repeatedly spoke in private conversations about her contempt for the current administration." The congressman claims that the form of the ambassador's statements was such that it may require her removal from office. 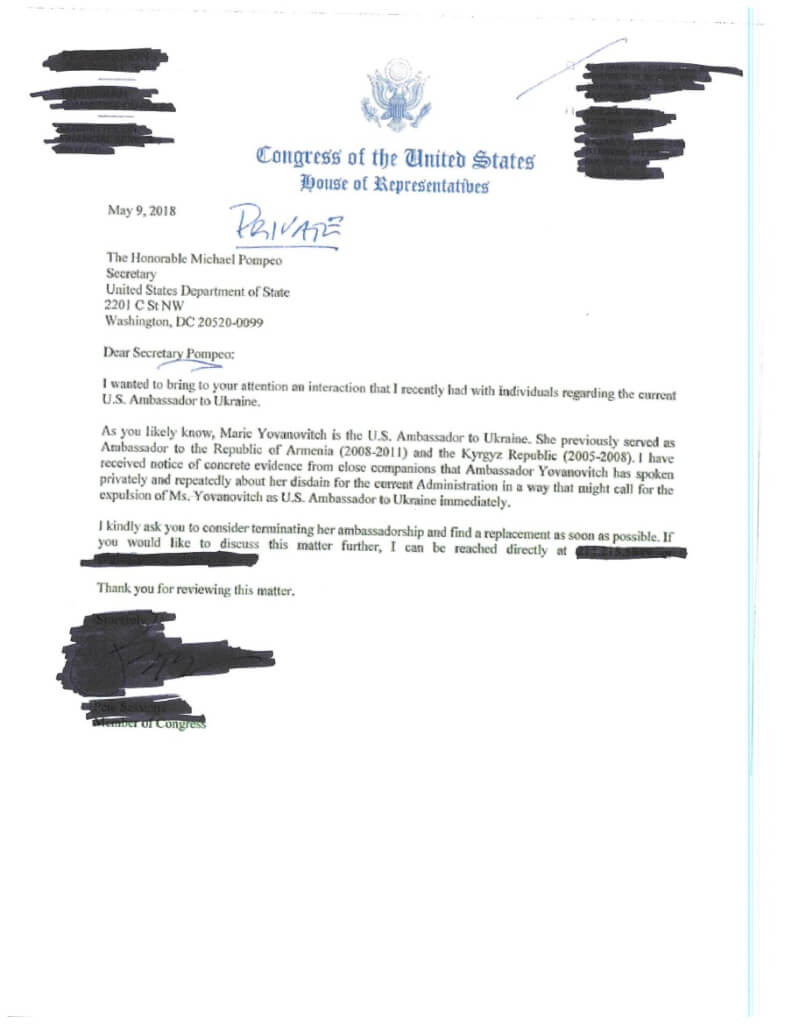 Such dysfunctional relations between the US embassy and the state in which it is located do not benefit any country, especially when Russia is waiting for the right moment to regain its influence in Ukraine.

Investigating what is happening in the US embassy in Kiev, and whether individual Ukrainian politicians or officials tried to influence the US election in 2016 to help Clinton take the Oval Office, are important steps to restart the relationship between Ukraine and America.

Ukraine-Russia-Israel-America: how I survived three immigration