Home In the U.S. Put up tents and barricades: in Portland, protesters created an “autonomous zone”

Early on Wednesday morning, July 15, protesters in Portland began pitching tents in a park near the federal courthouse and erecting barricades in the streets to create their own autonomous zone, which is compared to the disbanded protest zone on Capitol Hill in Seattle, writes Fox Business. 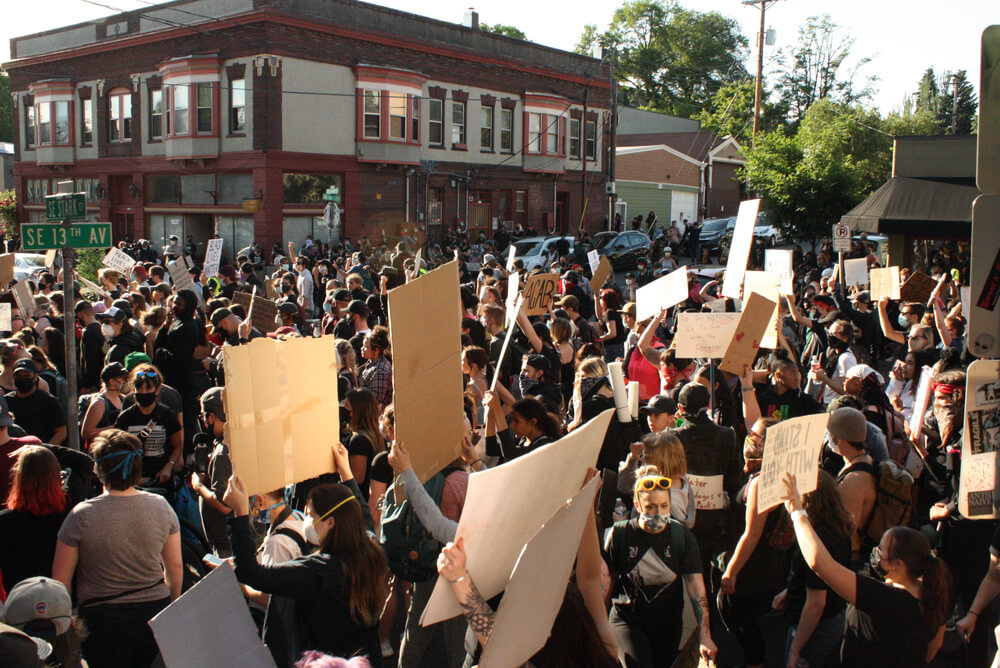 Demonstrators began erecting tents in downtown Portland on Lonesdale Square, across the street from the Pioneer Courthouse Federal Building, one of those that the Homeland Security Department sought to protect by introducing federal officers into the city two weeks ago.

A camera in the Portland Standard Building revealed that protesters began to assemble tents late on Tuesday, July 14, in the same park where the Occupy Portland movement was organized in 2011.

An unofficial Twitter page attributed to a group of anti-fascist and anti-capitalist teenagers calling themselves the Pacific Northwest Youth Liberation Front says the protesters want to create the Chinook Land Autonomous Territory, or CLAT, in downtown Portland. Chinook are several indigenous groups living in the Pacific Northwest.

On Wednesday, July 15, a Portland Police Department statement said that on the eve of “a couple of hundred demonstrators gathered in the Revolution Hall in southeastern Portland and marched all over downtown Portland, completing their march on Pioneer Square.”

The police said that some demonstrators went to the Justice Center and by 21:15 got on the road, blocking traffic. Then they began to barricade the streets using "industrial kitchen appliances, road blocking structures and blinking traffic signs." Demonstrators also lit several bonfires.

According to the police, the demonstrators threw glass bottles at the officers, sent lasers and set fire to what was left of the barricades. A few minutes later, one of the protesters put out the fire, and several demonstrators began to rebuild the barricade.

The police added that "tear gas, ammunition or force was not used to fight the crowd."

Civil unrest swept many US cities after the death of George Floyd on May 25 in Minneapolis. But in Portland, which is considered the location of extreme left activists known as Antifa, or anti-fascists, the protests never stopped.

City property suffered millions of dollars in damage, sales plummeted, and hundreds of thousands of Portland residents did not walk the streets for six weeks. Portland Mayor Ted Wheeler, a Democrat, said President Trump did not “suppress” the violence, but instead “exacerbated” tensions by sending federal officers to Oregon's largest city earlier this month.

Wheeler said Tuesday July 14, citing federal officials that "the best they can do is stay in their building or leave Portland altogether." The mayor added that “our goal is to end these violent demonstrations quickly and safely. In the meantime, I asked to remove graffiti on local federal objects. "

“I was born and raised here and I am a graduate of the local public school system. I decided to make a living here, I decided to raise my daughter here, ”said Wheeler, who was criticized from all sides. “And in all the years that I have lived here, I have never seen people more divided. And I haven't seen it look worse. "

The Pacific Northwest Youth Liberation Front, which defines itself as a “decentralized network of autonomous youth groups engaged in direct action towards full liberation,” reportedly helped organize protesters and give tactical advice.

On his page were published several images of home-made plywood barriers with slogans, for example, “Destroy pigs and prisons”, “Stolen land” and “Racism chokes us all”.

One woman posted in the group, Lindsey Smith, shared a video showing protesters moving goods in carts down the block to create new barriers during the “barricade party”. On the street, garbage bags were burning, and some protesters played pipes and drums.

The mayor and police have repeatedly denounced violent clashes as a devastating distraction from the Black Lives Matter movement. The authorities make a clear distinction between peaceful demonstrators and those who seek to interact with the authorities, their police call them "agitators."

On the subject: 'They brought dumplings, flowers, laid the table': how the Slavic diaspora supports the police in Portland

Other officials, including several city commissioners, Democratic Governor Kate Brown, and Oregon House Speaker, criticized police for excessive aggression. This was followed by a cycle of riots, police reactions and further outrage.

“This battle we have now is a war of communication over who is the 'good protester' and who is the 'bad protester'. And what the police and the mayor are trying to do is turn the city against people who have taken to the streets to protest, ”Gregory McKelvey, an activist and critic of police reaction, told The Associated Press.

“Every evening protest turns into a nightly protest against police activity. And so when people say they want it to stop, it can't stop, because today's protest will be about what the feds or the Portland Police Department did yesterday, ”McKelvey said.