Poroshenko and Volker met in Odessa aboard the US missile destroyer

President Petro Poroshenko in Odessa, visited the destroyer "Donald Cook" of the US Navy, where he met with US Special Representative for Ukraine Kurt Walker. 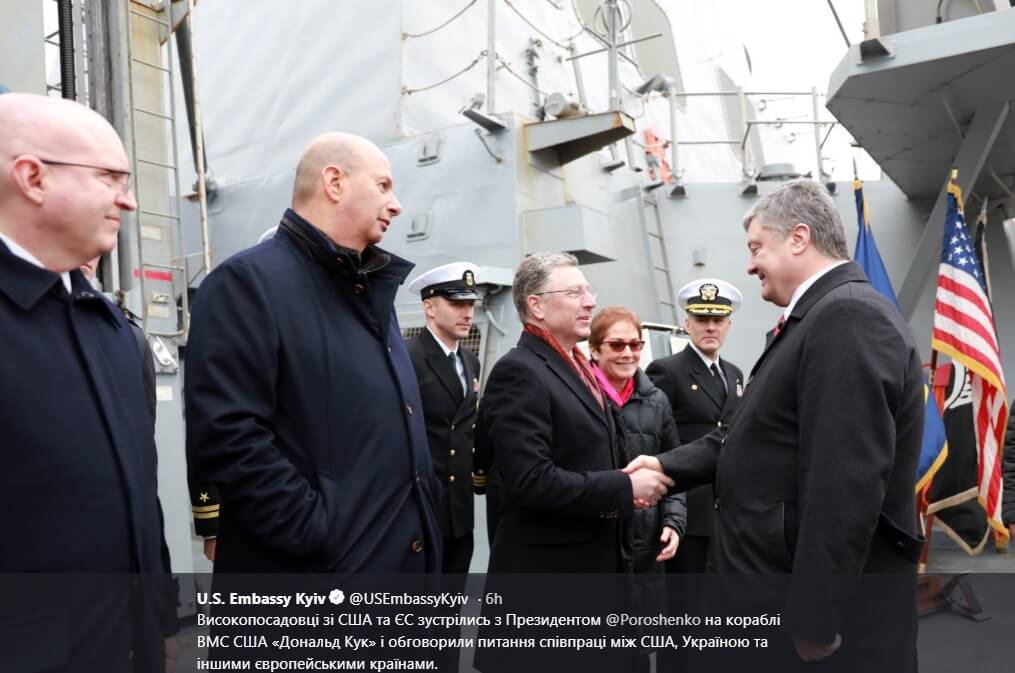 The head of state noted that the visits of American ships are a clear demonstration of cooperation between Kiev and Washington, said official website of the President of Ukraine.

“We thank our trusted ally. We take this development from exactly this angle, including in the defense sphere. The extraordinary symbolism of the meeting on board is “Donald Cook”, who is a very frequent guest in the Black Sea, in Odessa, ”said Petro Poroshenko. 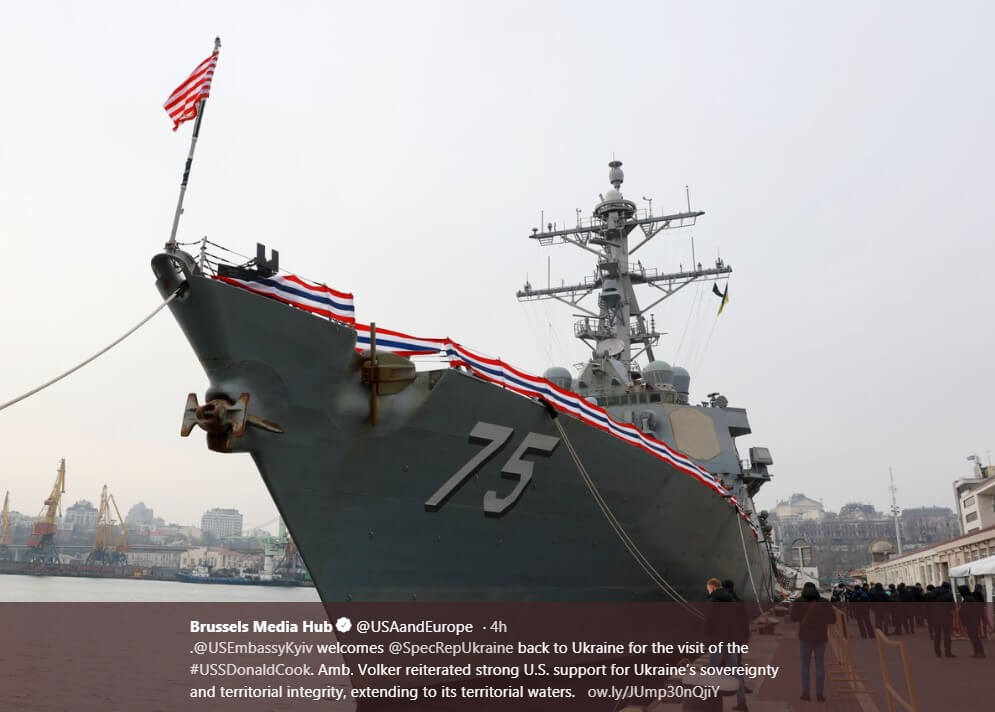 “This is a legendary ship. And this is an important signal to the Kremlin in the fifth year of occupation. The first is that the Crimea-Ukrainian. Secondly, freedom of navigation in the region will be ensured, as guaranteed by the UN Convention on the Law of the Sea, that the Ukrainian-American partnership is one more than ever. And we effectively cooperate in all spheres, including defense, ”the President stressed. 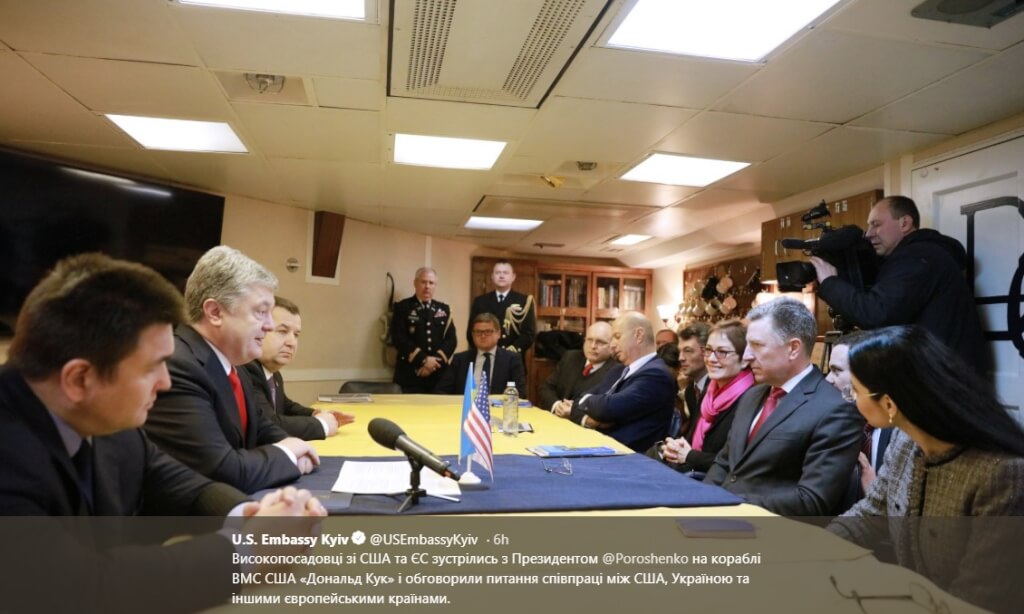 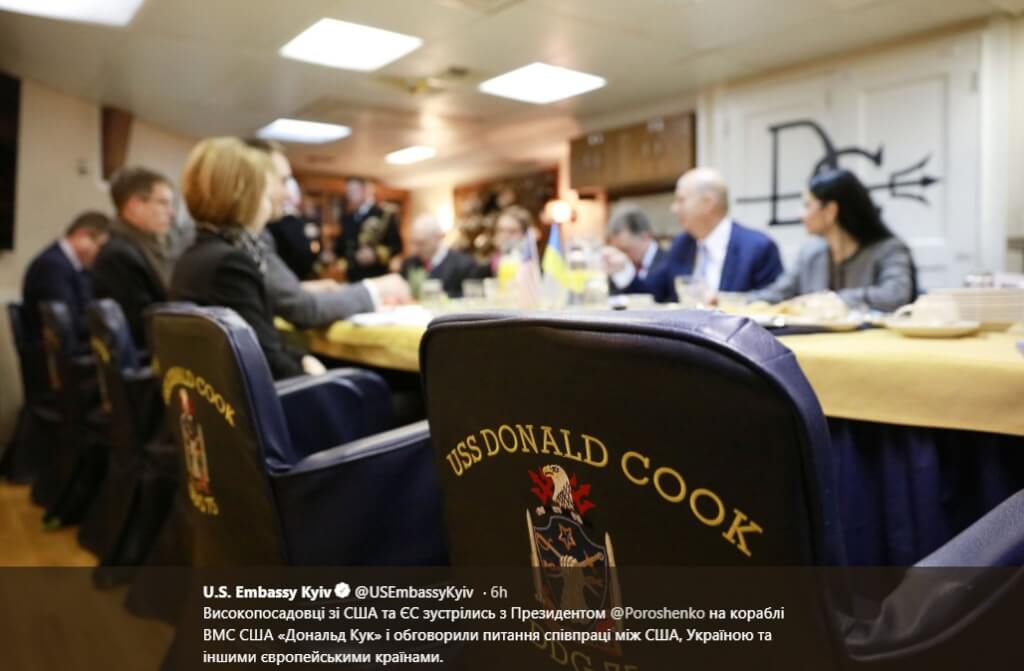 “I really appreciate the fact that our American partners increased their military presence in the Black Sea in response to our request. This is an important response to the attack and the act of aggression against the Ukrainian ships, which took place on November 25 last year. The Kremlin’s aggression, I want to stress, affects not only the vital interests of Ukraine. It also affects the security issues of the EU, NATO in the Black Sea, ”the head of state emphasized. 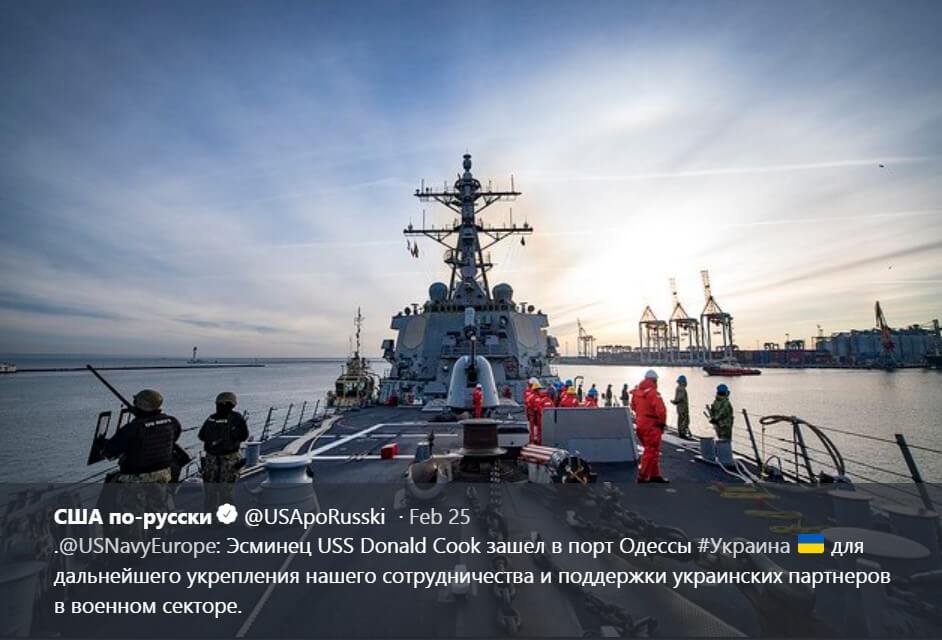 He added: “I emphasize the project of the Kerch bridge, when it was used as a forerunner to attack the Ukrainian ships. Tomorrow, the “Nord Stream-2” symbol may appear for an attack in the Baltic Sea and in any other position. ” 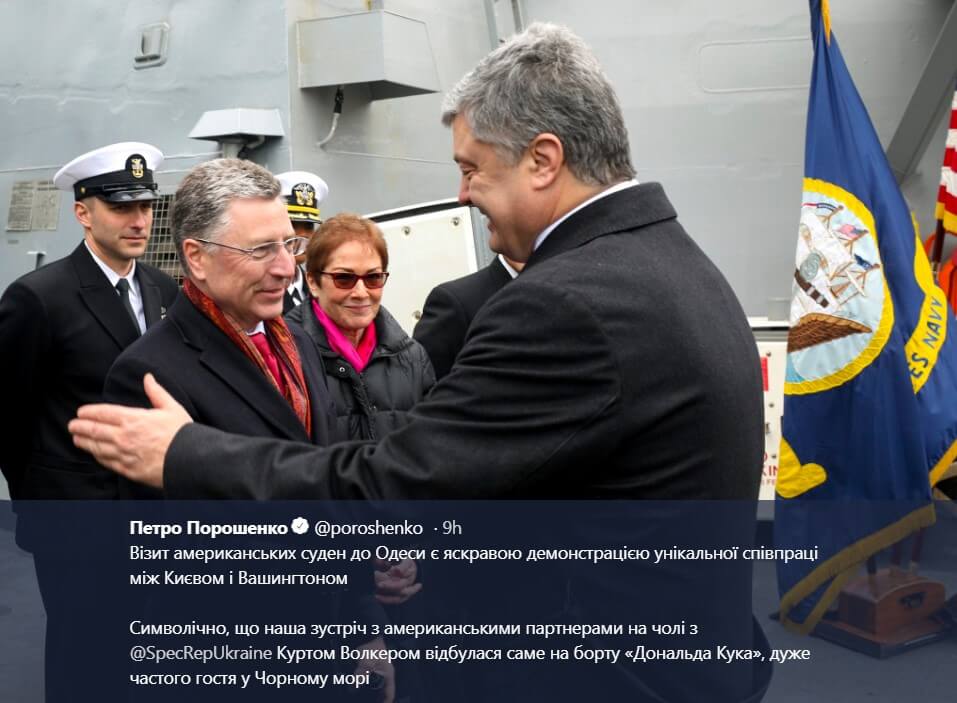 The US Special Representative for Ukraine, Kurt Volker, who is on a working visit to Odessa, noted that the United States is firmly supporting the independence, sovereignty and territorial integrity of Ukraine.

“We stand and will always stand next to Ukraine and the Ukrainian people to defend freedom and democracy,” said Kurt Volker. “It is a great honor for me to be here with you today, Mr. President.”

Kurt Volker also stressed: “We are here as your good partners and friends. Maintaining freedom of navigation is also important for us. ” 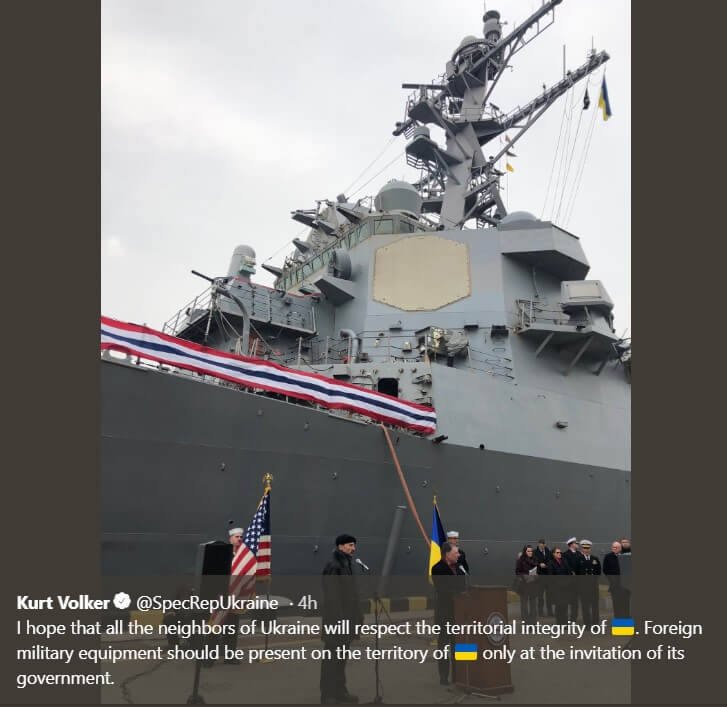 From the American side - US Ambassador to Ukraine Marie Yovanovic, Deputy Commander-in-Chief for Political Affairs of the US Armed Forces in Europe Philip Ricker, US Permanent Representative to the EU Gordon Sundland, Deputy Prime Minister for the Implementation of the Strategic Partnership of Romania, which currently chairs the EU, Anna Birchal. 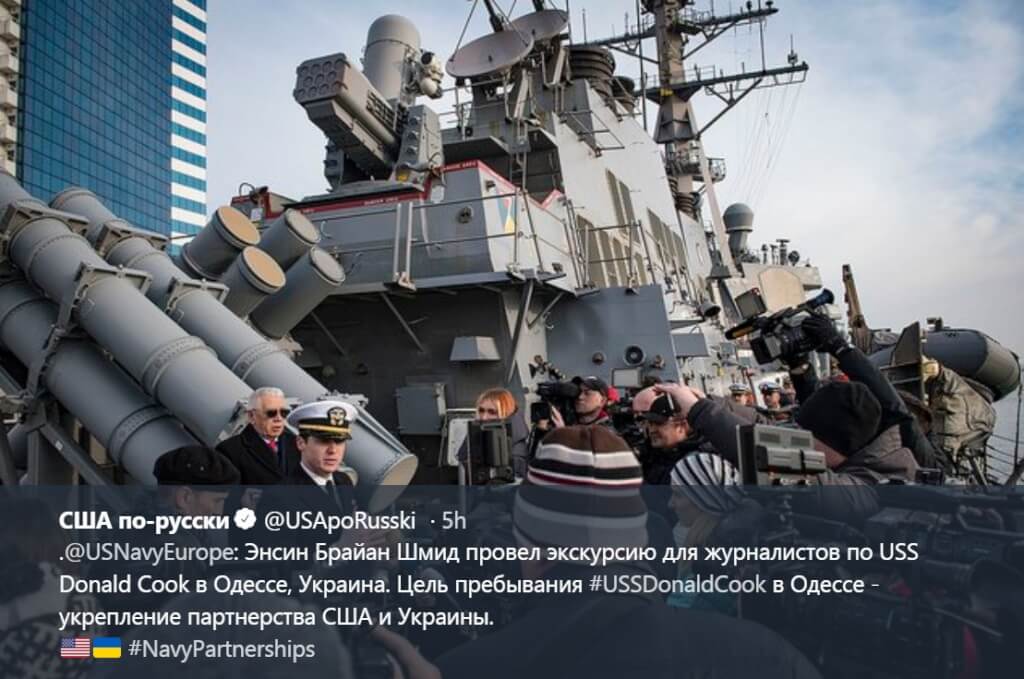 Recall that the American missile destroyer "Donald Cook" (USS Donald Cook (DDG 75), February entered 19 in the Black SeaFebruary 25 arrived in Odessa. An American destroyer carrying Tomahawk cruise missiles with a range of 1,6 thousand km, moored at a pier near the Odessa Maritime Station. The ship will stay in Odessa until February 27, reports Tsenzor.NET with reference to Duma.

DDG75 first appeared in the Black Sea in July 2007, then for the first time went to Odessa. The last time he visited the Ukrainian port in September 2015 of the year to participate in the joint Ukrainian-American exercises "Sea Breeze-2015". In April, 2014, at the height of the Russian seizure of the Crimea, was in Constanza, Romania.

We appreciate our partners in the #BlackSea.

The US Navy's missile destroyer "Donald Cook" arrived in Odesa in response to #Russia's insidious attack near the Kerch Strait. pic.twitter.com/T1GQK49ten

This is the second time the destroyer has entered the Black Sea this year. At the end of January, Donald Cook stayed in the Georgian port of Batumi for five days.

USS Donald Cook (DDG75) belongs to the early type of destroyer class "Arly Burke". Launched in August 1998. The length of the 154 meter, the width of the 20, the draft of the 9 meters. Full displacement of about 9000 tons. 32 node speed. It has onboard 90 launchers for the Tomahawk, Asrok and Standard-2 missiles, as well as the Harpoon anti-ship missiles. Carries a variety of artillery, anti-aircraft and torpedo weapons.

The United States created a site on Russian aggression in Ukraine

Two warships collided off the east coast of the United States