Home In the U.S. Pokemon GO: 5 incidents caused by the game

Nothing foreshadowed trouble this summer until Niantic launched the game Pokemon GO. As a result, parks, museums, cemeteries, hospitals and not only filled with people with smartphones who are trying to find another Pikachu. ForumDaily selected the five most interesting moments that have occurred since the release date of the game.

Accidental meeting with a suspect

NBC Los Angeles told the story of two marines who managed to apprehend a murder suspect while playing Pokemon Go.

Seth Ortega and Javier Soch from California were hunting for Pokémon in Fullerton. But the game suddenly stopped, and they decided to wait. While waiting, they noticed a man who approached women with children, and then molested a child on the court. Deciding to act, they chased the suspect. They were helped by another person who noticed how a passerby molested the boy. Together, he was caught and called the police.

Later it turned out that the detainee was looking for Jacob Kells for numerous crimes.

Four police officers caught up on the fact that they enthusiastically played Pokemon Go. The user even filmed a video. On it, the author of the video approached them to clarify whether they had seen a wild Pikachu, to which he received an answer that they had already caught him. Now tv channel NBC 4 trying to find out if the police were on duty.

On the hunt for Pokemon with dogs from the shelter

Shelter for homeless animals MuncieAnimalShelter in Muncie (Indiana) asked to take on the hunt for Pokemon dogs from their shelter. The organization posted a request on the official website on Facebook. 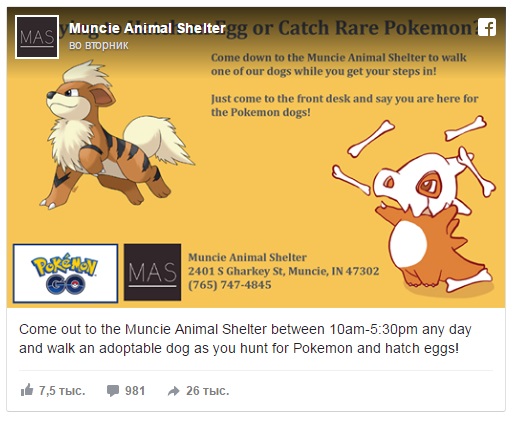 According to Phil Pekingpau, director of the shelter, the idea came after he saw how many people are looking for pocket animals, just walking in the park.

“The idea is that the players take the dog with them to go hunting for one day,” he said.

In search of pokemon often people do not notice the real world. This happened to an employee of the 10 channel in St. Petersburg, Florida, Allison Kropf, who happened to be on the weather forecast on a film set while playing Pokemon GO. Later, she posted a frame on facebook and wrote: “That moment when you realize that you are dependent on Pokemon GO ...”.

The presenter of the weather forecast did not lose his head and asked the viewers to be careful.

Pokemons for your business success

INC Edition offers advice for legal entities: as store owners or cafes and other entrepreneurs can earn on Pokemon GO. The idea is simple: the game directs people to the places where pokemons appear frequently. To turn these people into their customers, you need to either lure them to your institution (for example, by placing a “trap” in it, which for some time accelerates the appearance of Pokemon), or equip a mobile shop and send it to places of Pokemon clusters. The proposed business model allows you to turn 100 dollars into 84 hours of increased visitor flow.

It is especially pleasant that many people began to use these features of the game not for profit, but completely disinterested. For example, one American child put near the "pokestop" next to their home booth with free lemonade for other players, сообщает "Jellyfish".

Holocaust Museum asks visitors not to look for Pokemon there

How the world went crazy with Pokémon GO