Home Page Educational program Different from the rest of the world: why mailboxes in the US are uniquely shaped

“The mailbox of American suburbs and villages is unmistakable. These tin containers have a very peculiar shape and an unusual arrangement - on one leg near the road. You have probably seen such in American films and cartoons, perhaps you did not even immediately understand what kind of strange loaves are standing in front of private yards in the United States, ”writes Levik on my blog. Further - from the first person. 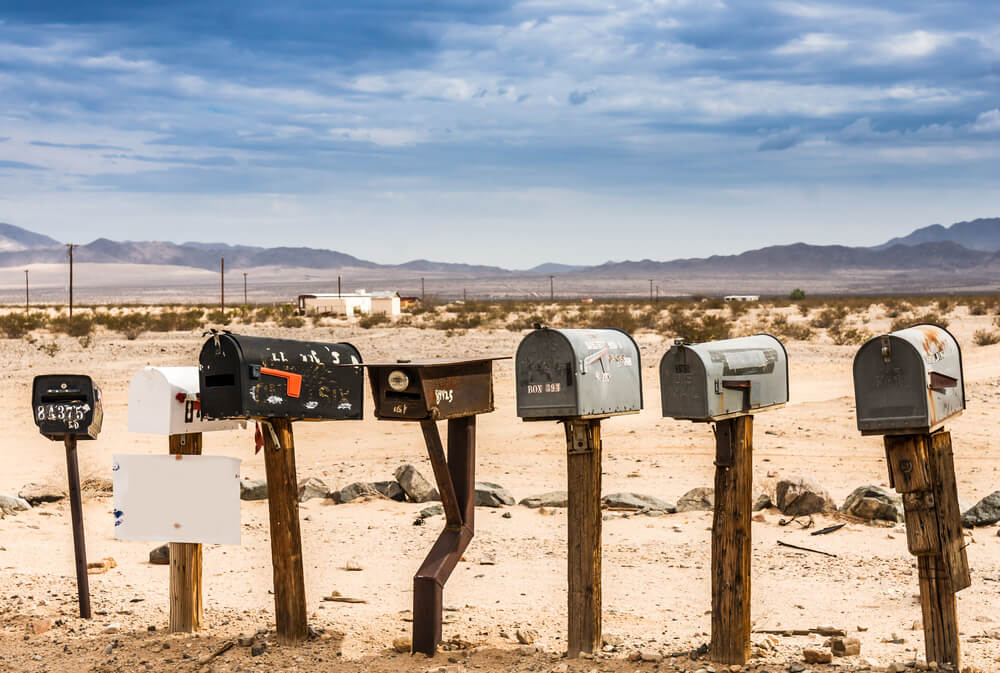 The other day I learned the history of these mailboxes, and how, by coincidence, such a design took over the entire vast country.

In many countries, mailboxes can be absolutely any shape and size.

And in the United States, if you leave the high-rise city centers, almost all the houses for the press will be the same - metal boxes with a rounded roof and iron flags on the side. They stand neatly by the road to make it easier for the postman to throw mail into them.

In the suburbs and countryside of the United States, it is difficult to find letterboxes that look different.

I am an urban person and, having moved to the USA, I have not seen such people in real life for a long time. It turned out that they are not placed in cities, even in front of detached private houses. But outside of megalopolises, they have become so popular in the twentieth century that even the characters of famous cartoons receive their mail in such boxes.

The reason for this is in the history of mail delivery in the United States. The American colonies had their own specialized service a year before they declared independence. At one time, Lenin said that the first thing to do was to seize the telephone, telegraph and bridges, and Benjamin Franklin realized back in the XNUMXth century: in order to create a successful united country, it needs “its own” mail.

True, that early post had little in common with what this service seems to us today. Newspapers and letters were delivered to post offices, where citizens had to come for them. Taking the letter, they paid for the delivery - until 1847 there were no postage stamps in the United States.

It was only in the 1860s, during the Civil War, that the postal service in large cities began to experiment with home delivery - the postal income was enough to pay the delivery people. At that time, the post office often delivered summons to people about the death of their relatives at the front, and it seemed inhumane to make recipients stand in lines for such news.

Initially, the mailman knocked on the addressee's door and waited for it to be opened. If no one was at home, he came on another day. But the flow of correspondence increased, and mail slots began to appear in houses, where one could slip a letter, even if the owners were at work. By the end of the XNUMXth century, the villagers were unhappy: they paid the same money for postal services, but were forced to send letters to the post office, which might not even be very close.

Soon, the management of the service listened to the demands of the farmers and in 1896 began to deliver correspondence to the countryside. The addressees were required to put a mailbox by the road, because, as a rule, a rather long path led from the common road to the house, and it seemed inappropriate to force the postman to go to the very door. But this has already greatly improved the comfort.

At first, farmers used everything at hand as mailboxes: old cans, boxes of various sizes, and so on.

Many of these items were ill-suited for use as a letterbox — they leaked in the rain or were too small. Therefore, by 1901, the US Postal Service introduced certain requirements for mailboxes in rural areas: they must be made of iron, with welded seams to protect mail from rain, snow and dust; provided for the minimum size; boxes had to be installed at a certain height, so that it was easier to put correspondence in them without leaving the postal carriage or car.

If someone's box did not meet these requirements, then they were given a warning threatening to suspend delivery if they did not purchase one of the 14 approved models. Here some especially enterprising postmen even found a way to earn extra money - they recommended boxes from “friendly” manufacturers.

So in 1915, the postal authorities approached one of their employees named Roy Joroleman with a request to come up with a unified mailbox design.

On the subject: 'Your status depends on the mail': how delays in the US Postal Service decide the fate of immigrants

Joroleman's invention was made public - any company could produce letterboxes of the official standard. It was a kind of open source of the early XNUMXth century. In exchange, the Post demanded that only boxes of this type be installed in the suburban and rural areas of the United States.

Its curved top made it cheap, reliable, and practical: the box was made from a sheet of painted steel, and assembly required two rivets, three bolts, and four screws and nuts. Because of this shape, water flowed from it, snow fell. A latch on the front cover kept it closed, and the red iron flag on the side was raised when the mail was put into the box to be collected.

In 1929, a slightly larger version was developed, designed for parcels, which began to be sent more often to American homes.

From 1915 to 1978, all rural and suburban mailboxes in the United States were required to conform to Joroleman's design. This is why these uncomplicated products have taken over the countryside of the States.

When this requirement was canceled, other options for press boxes began to appear. For example, newspaper companies began to install individual plastic boxes without a front lid for customers, specifically for delivering newspapers (they are put in bags in case of rain). After all, since the distributors of newspapers are not post workers, they have no right to open the lids of official boxes.

But until now, when you get to the so-called real America, then, most likely, you will still see a line of these classic mailboxes near the roads. True, now you will know that their peculiar form was invented by the postal worker more than a hundred years ago.

16 crazy ways to save money