For 10 years, a married couple tried to win a US green card, and after receiving it, they robbed the house on Rublyovka, where they had previously worked. Before leaving for America, they took thousands of dollars worth of luxury items from the businessman's house, reports TVNZ. 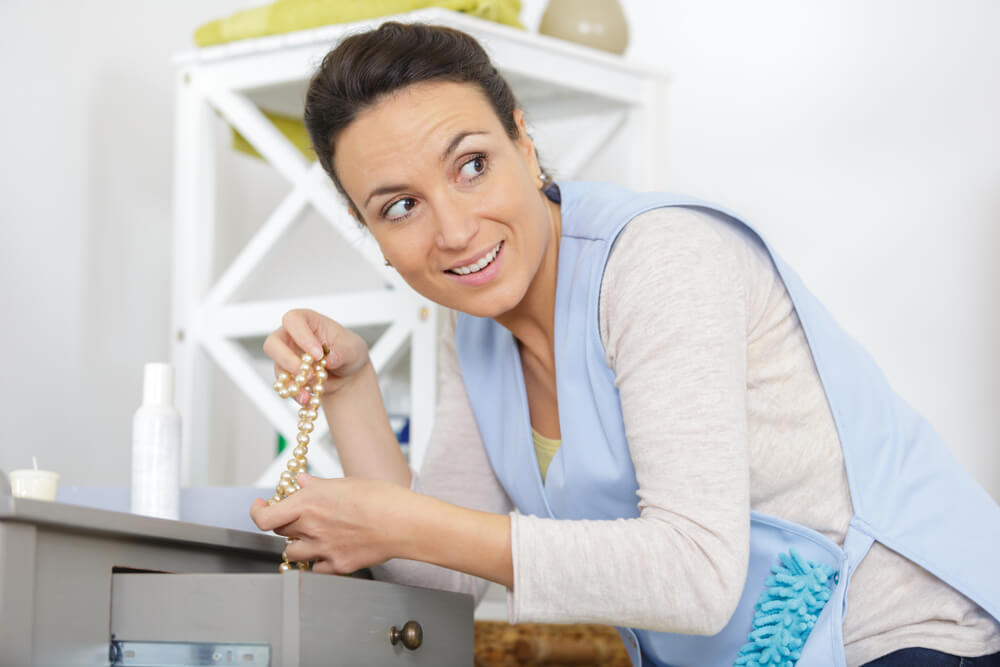 51-year-old Alyona and 60-year-old Vasily are spouses from Belarus. Several years ago, a married couple came to Moscow to work. Here, through a recruitment agency, they got jobs as housekeepers for famous people: movie and pop stars, businessmen and politicians. Alena took care of the household, put things in order and cooked, and Vasily did all the men's work, looked after the garden, and acted as a driver. So they worked for several years in different houses.

For the last 2,5 years they have been working and living in the house of a prominent businessman on Rublyovka. There, Alena and Vasily became practically family members, they were completely trusted and treated well. In addition, they received good money for their work and helped financially their children, who remained in Minsk. But the spouses were not going to stop there, for many years Alena and Vasily dreamed of emigrating to the United States. To fulfill their dream, they participated in the green card lottery every year for 10 years. But until recently, the pair could not win.

On the subject: California woman finds $36 in old couch she was given away for free

Last year, future emigrants were lucky. Alena was among those who won the coveted green card. The couple told their employers about this and asked to go on a trip to Poland to complete the paperwork. The owners of the house did not mind. Soon the workers returned and announced their imminent dismissal. They decided to work for another month, during which time the owners could find a replacement for them, and Alyona and Vasily could earn some more money for the trip.

The month has come to an end. On the agreed day, the housekeepers received their payment, packed their things and left.

“No one followed them, we had complete confidence. When they were packing, we were not at home. Immediately after their departure, we did not notice anything suspicious. But after a while, my wife discovered that some things in her wardrobe were missing. Among them were things worth about $ 7400, ”says the owner of the house

Former employers contacted the workers, but Alyona and Vasily denied their involvement in the loss of clothes. Then the owners turned first to the recruitment agency, and then to the police.

“There was a complaint from a 57-year-old citizen that housekeepers stole items belonging to his wife from his home, including a Chanel jacket and cardigan, a pantsuit and three Louis Vuitton pullovers. The amount of damage is $17000,” the source said.

According to the application, they began to conduct an investigation. Alyona and Vasily found out about this from a message from their employers. They could be prosecuted for theft on a large scale, and it could prevent their emigration. Then Alena nevertheless confessed to the mistress of the house that she and her husband had taken things out of the house.

“After that, they returned some of the things by parcel through relatives in Belarus, not everything was there, but they still sent the most valuable things. By that time, they themselves had already managed to fly to Los Angeles, but perhaps they were afraid that there might be problems, ”says the former employer.

Despite the fact that the workers returned the stolen property, the owners of the house still had a residue from this incident. The couple did not expect such an act from the people whom they trusted so much and helped in every possible way for several years. They regard what happened not just as a theft, but as a real betrayal. Now the owners of the cottage on Rublyovka will approach the selection of domestic staff more carefully. According to agency workers, this is the second such incident in their memory. Several years ago, one of the families was robbed by a driver. But the man was quickly detained, because he was in Russia.

Angelina Jolie wears a ring with a map of Ukraine: she was presented with it in Lviv