Home In the U.S. 'Nobody buys wine with hints of smoke': California wineries suffer damage due to fires

Wildfires are raging in the heart of California's multi-billion dollar wine industry, destroying high-profile wineries, blanketing vineyards with potentially devastating smoke and ash, and ending much of the tourist season barely recovering from the pandemic. The Sacramento Bee. 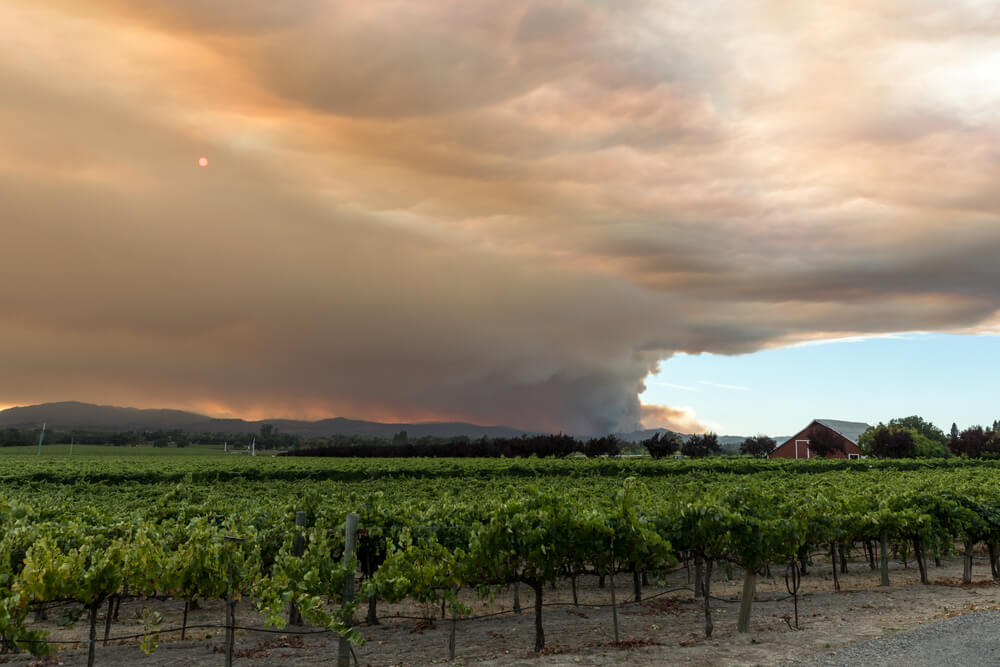 Damage reports were still coming in on Tuesday September 29th in parts of the famous Napa and Sonoma wine districts, where the Glass Fire is raging. The Chateau Boswell winery in St Helene was destroyed, as were parts of the Burgess cellars in Deer Park. The Newton Vineyard winery in nearby Spring Mountain was also hit hard.

“We hope to get creative and soon find ways to introduce our wines to you in some other way,” Fairwinds wrote in a post on the site, adding that the tasting room was badly damaged.

Stephen Burgess, whose family sold Burgess Cellars just two weeks ago, said the winery had lost its production facility and historic basement. He said the new owners - the Lawrence family, owners of nearby Heitz cellars - are likely to rebuild.

“The brand is alive, the vineyards are alive,” Burgess said. "The most important thing in the wine business is the vineyards, and they are all right."

A volunteer firefighter, Burgess said most vineyards can withstand wildfires unless the space between the vines is covered with grass.

But even though most of the region's vineyards have survived the fire and up to 90% of the grapes have been harvested this year, problems abound.

Anita Oberhalster, a professor at the University of California at Davis who studies the delicate chemistry of wine grapes, said the fire puts grapes at risk from smoke.

“There are still a lot of grapes on the vines,” she said. "It's painful ... When I heard about this new fire, I felt like crying."

On the subject: Escaped in the middle of the night: in California, thousands of people have been evacuated due to powerful new fires

Oberhalster said that low-quality wine producers can handle the smoke from grapes. At the upper level, where most Napa and Sonoma wine grapes are grown, processing is not an option as it can significantly affect the taste and quality of the wine. As a result, some wineries may be phasing out production this year, rather than risking their reputation over low-quality wines.

“Nobody wants a customer to take a bottle of wine, pay a lot of money, and not get the quality they expect,” she said. "You will find that some high-end wineries will not produce the 2020 harvest."

In addition, Oberhalster said that growers and winemakers will probably not know for another month how much damage their vineyards have suffered, due to the fact that testing laboratories in the area are waterlogged.

Because they rely so heavily on high-quality grapes, Napa and Sonoma are particularly vulnerable to smoke exposure. While California wine grapes averaged $ 805 a ton in the state last year, Napa Valley grapes were worth a staggering $ 7941 for Cabernet Sauvignon, $ 2773 for Pinot Noir and $ 5797 for all grapes grown in valley.

The Napa and Sonoma wine industry is valued at billions of dollars a year, including tourism, wages and production costs. Now, for the third time in four years, these industries are hit by wildfires.

The hundreds of boutique wineries scattered across the region are likely to be hit hardest. Unlike national brands with an extensive supermarket presence, they rely almost entirely on tasting room sales - establishments that have been closed for months due to the COVID-19 pandemic and have struggled to get back on their feet with a gradual economic recovery.

Wineries in California, Oregon, and Washington have experienced violent wildfires before, but the smoke from the fires has been particularly heavy this year - thick enough to shade vineyards nearly ready to harvest. Day after day, some West Coast cities experienced the worst air quality in the world. LA Times.

Wildfires are likely to be "without doubt the worst disaster the viticulture community has ever faced," said John Aguirre, president of the California Grape Growers Association.

Winemakers around the world are already adapting to the impacts of climate change, including warmer temperatures and more severe droughts. Those who are near fire-prone forests face the added risk that smoke can ruin everything.

ETS Laboratories in the Napa Valley city of St. Helene says the test results on the currently obtained grape samples will not be available until November. New customers will have to wait even longer for results.

Noah Dorrance, owner of Reeve Wines in Healdsburg, that in every bunch of grapes in the region "you can already smell that ashy aroma of grapes, like grilled or bonfire."

Aguirre remembered tasting wine damaged by smoke during the tasting. In one description of the tasting card, the scent was compared to "faecal plastic."

On the subject: A rare occurrence: in California, two powerful fire tornadoes were recorded at once

The problem comes down to compounds called volatile phenols, which are released when wood burns and can be absorbed by grapes, Oberhalster says. These compounds are naturally present in grapes. But when levels get too high, they can develop a bad taste.

“Pinot noir is a grape with a very thin skin, which means it is very delicate in nature and you cannot mask any flaws in the growing conditions or in the winery,” said Christine Clair, director of Willamette Valley Vineyards in Turner ...

Jim Bernau, founder of Willamette Valley Vineyards, said of the smoke, "I've grown grapes here for over 38 years and I've never experienced or seen anything like it."