Home In the U.S. Trump has expanded an immigration ban to one of the post-Soviet countries: what you need to know

The US administration has announced the expansion of the list of countries whose citizens will be restricted from entering the United States. For the first time, the state of the former USSR, Kyrgyzstan, was included in this list. In addition to him, the list included Nigeria, Sudan, Tanzania, Eritrea and Myanmar. Writes about it with the BBC. 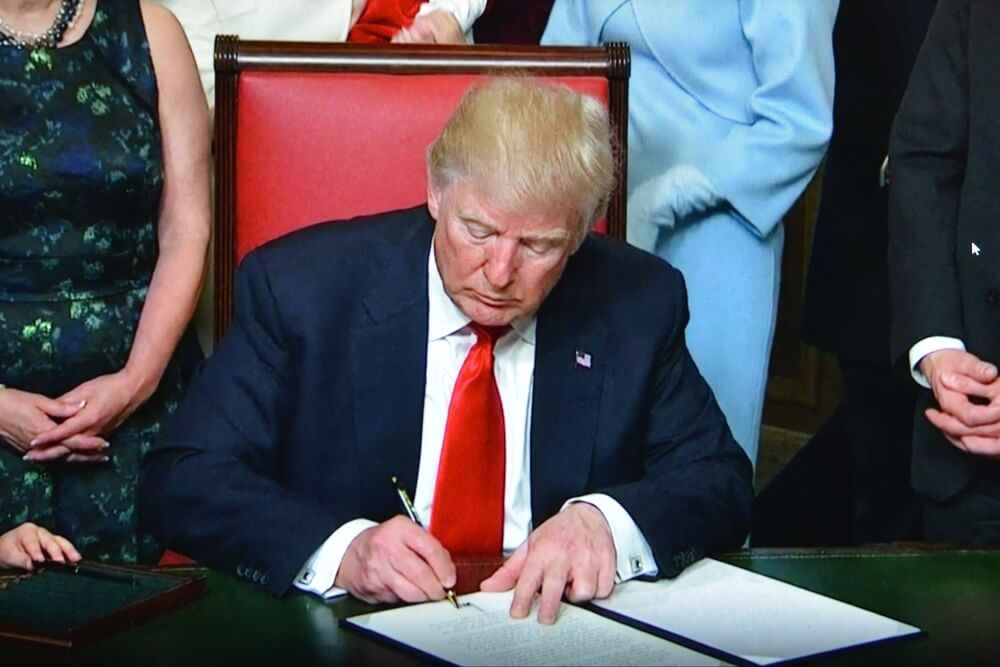 According to American media reports, Washington was considering the possibility of restricting entry for Belarusian citizens, but then abandoned this step.

Contrary to the forecasts of the American media that announced the upcoming decree of US President Donald Trump a few weeks ago, the new list does not imply a complete ban on entry into the United States for citizens of six states. Residents of Kyrgyzstan, Myanmar, Eritrea and Nigeria, for example, are denied the right to apply for immigrant visas that give them the right to reside and work in the United States. Citizens of Sudan and Tanzania will be excluded from participating in the green card lottery.

At the same time, residents of all these countries will still be able to apply to the American embassies and consulates for tourist and business visas.

The first order to ban entry into the United States for citizens of seven predominantly Muslim countries was signed by trump January 27, 2017, just a week after the inauguration of the new President of the United States. The list includes Iran, Iraq, Syria, Sudan, Yemen, Libya and Somalia. Later, Venezuela and North Korea were included in this list.

Representatives of the administration then explained that the citizens of precisely these states pose a special threat to US national security, and they should be completely prohibited from entering the country.

The president’s order, known as the Muslim ban in the US media, was blocked three times by federal judges in various states, but the Supreme Court ultimately upheld the president. Iraq and Sudan were excluded from the list, and the text of the order was amended to specify Washington’s requirements for the countries on the list.

On the subject: 4 Trump Administration Decisions That Boost US Economy

Among them - the issuance of citizens traveling abroad, biometric passports equipped with an electronic chip, as well as the expansion of information about terrorist and other threats that the governments of these countries share with the US authorities.

In his public speeches in recent years, Donald Trump has repeatedly mentioned that tightening immigration policy is one of the priorities of his administration, and the lists of countries whose citizens will be restricted from entering the United States will be constantly expanded.

Speaking to reporters during a visit to Davos in January 2020, Donald Trump confirmed that he did not intend to abandon his campaign promises to limit immigration.

In the new list should immediately be two post-Soviet states - Kyrgyzstan and Belarus. Restrictions were also planned to be imposed on citizens of Nigeria, Sudan, Tanzania, Eritrea and Myanmar.

The US State Department then officially refused to respond to a request from BBC reporters. Interlocutors of journalists in the American diplomatic department, who nevertheless agreed to comment on the appearance of the new list on condition of anonymity, confirmed that the initiative to expand the ban comes from the administration, but could not clearly determine why these states were included in this list.

The Nigerian government, for example, is a US partner in the global anti-terrorism program, and Nigerian military personnel are conducting joint operations with the US military.

A source in the Kyrgyz Foreign Ministry said that Kyrgyz diplomats learned about the upcoming ban from an article in Politico.

Kyrgyz Foreign Minister Chingiz Aidarbekov believes the whole thing in the absence of citizens of the country biometric passports.

A source in the Kyrgyz Foreign Ministry, in a conversation with reporters, expressed confidence that the decision was caused by the US domestic political agenda and was not connected with the US policy with regard to Kyrgyzstan.

According to him, the ban is "stupid, shortsighted, awkward position of the current US administration." The diplomat suggested that some part of the American establishment might remain dissatisfied with the closure of the US base in Kyrgyzstan in 2014, and the inclusion of this country in the new list is determined by the military and economic alliance of Bishkek with Moscow.

Introducing on Friday, January 31, the administration’s new initiative, Acting Head of the US Department of Homeland Security Chad Wolfe He explainedthat the new list was the result of a “systematic review” that lasted almost a year.

In March 2018, the U.S. administration sent a series of questions to the governments of 200 states regarding their cooperation with the United States in the fight against terrorism, the exchange of intelligence information and data on passports issued to their own citizens. The authorities of these countries were also required to independently evaluate the “level and degree” of the terrorist threat.

After that, an interagency group in the USA, which included representatives of the Department of Homeland Security, the Pentagon, the State Department and the office of the director of the National Intelligence Service, conducted their own assessment of the situation in all these states.

“As a result, it was these six states that received the worst grades,” Wolfe explained, answering questions from reporters in Washington. “In the same way as the seven countries already included in the initial list, they took the last places in the general list.”

The official deemed it necessary to clarify that the "most" of these countries intends to maintain good relations with the United States and tried to help the Americans in assessing terrorist threats.

“For a variety of reasons, they were unable to meet the minimum requirements that we formulated,” Wolfe said. “Therefore, the only way to reduce possible risks was the introduction of travel restrictions.”

He added that the administration intends to conduct such reviews every six months, and any of the countries will get a chance to be removed from the list if Washington considers that this state has taken the necessary measures to strengthen its own security and has begun to cooperate more with the United States.

Which states have the largest number of homeless people?

Trump's head and a zombie baby: what tricks do drivers in the US use to drive along a grace strip