Home Educational program Not only presidential security: how the US Secret Service is arranged and what is it capable of

In 1865, 155 years ago, a secret unit was created under the US Treasury to fight counterfeiters - the Secret Service of the Department of Finance (SSDF), says Bigpicture. 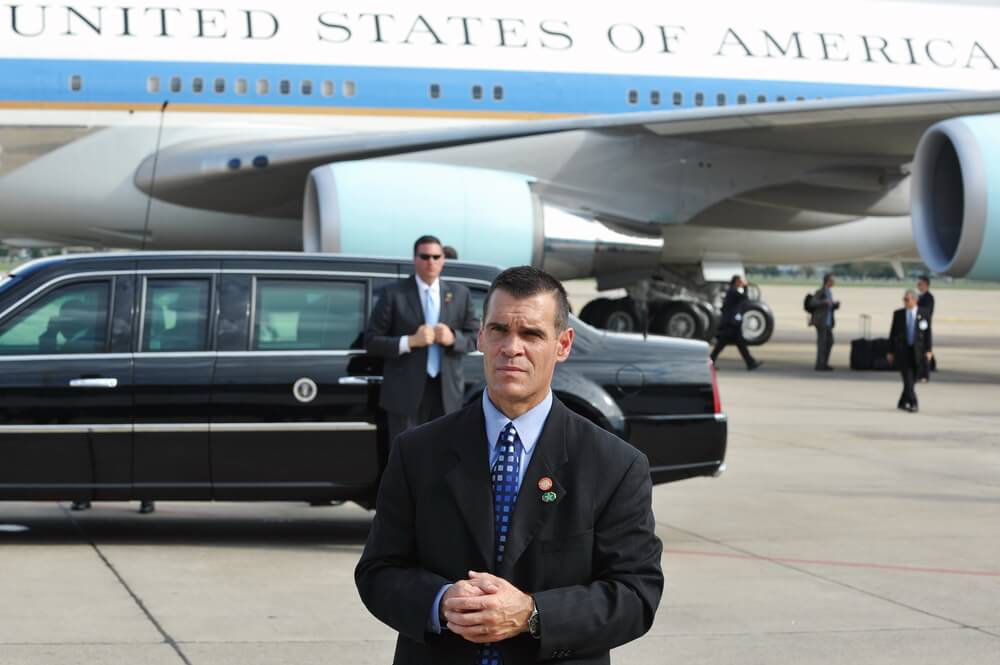 Today, the US Secret Service is a federal agency subordinate to the Department of Homeland Security. The main tasks of the Secret Service are to prevent counterfeiting of American money, debentures, and other valuable documents, as well as to protect the president, vice president, their immediate relatives, other high-ranking officials, former presidents and their spouses, presidential and vice presidential candidates, representatives of foreign states during their visits to the United States. The Secret Service also investigates various types of financial fraud, identity theft and helps to investigate some internal crimes.

The President and his family are directly protected by the Presidential Protective Division. Although the protection of the president is as close as possible to the ideal with the help of other means.

For example, George W. Bush rode the ground in an exclusive armored Cadillac DeVille. The interior armor can withstand a direct hit from a grenade launcher. The gas tank contains a foam-retardant filler. The tire arrangement allows the car to move at high speed even if the wheels are punctured. The windows do not drop, and the handles on the outside are fake, the machine opens only from the inside. On board, in addition to ammunition, including tear gas grenades, there is a supply of donated blood that can be transfused to the president.

There are traditions in the protection of the head of the United States, which the Secret Service does not change. For example, the President of the United States abroad almost always stays in a hotel, and not in a state residence. Usually an entire wing of the hotel is rented, which can be reliably blocked off, and at the same time, emergency evacuation options are calculated.

Preparations for the president's trip abroad begin well in advance. As soon as the program of the visit begins to be discussed in the White House, Secret Service agents begin to estimate various scenarios of possible threats. All movements of the president are signed and coordinated to the smallest detail. The plans are being worked out and constantly improved taking into account intelligence data.

Another feature of the travels of the President of the United States is that on multi-day trips, he takes almost the entire White House with him. The vanguard of the Secret Service is dispatched along the presidential route in advance. When the president himself finally arrives, dozens of cars form his cortege. Among them there is necessarily an armored presidential limousine, a couple of similar-looking spare cars, an ambulance car, a communication car, as well as numerous retinue cars.

Secret Service agents acting as bodyguards dress appropriately for each occasion. In most cases, this is a conservative dark-colored business suit.

Photographers often capture them wearing sunglasses and a communication earpiece.

It should be noted that there are certain risks involved in working with the Secret Service. Thus, in 1999, 31 members of the Secret Service were killed in the line of duty. In 2003, the service lost 34 agents killed and wounded in the line of duty. True, the details of these incidents are classified. For comparison, the annual losses of the FBI, which has six times the staff, are 60-70 people.

"The range of hostile scenarios that must be taken into account to ensure the safety of those who are called upon to protect the Secret Service is constantly expanding," said John Barletta, who helped organize President Ronald Reagan's overseas visits. - Now we have to keep in mind not only situations when the main weapon is a pistol, machine gun or sniper rifle. Today we need to weigh such things as terrorist activity, options when someone can use a rocket or an airplane. "

So the Secret Service only dreams of peace.