Home Incidents At the funeral of a famous rapper happened murder

At the funeral of a famous rapper happened murder

In Los Angeles, California, during the funeral of rapper Ermias Asghadom, known as Nipsey Hussle, who was shot by 31 in March near his clothing store, there was shooting, which killed one person, three more were injured. He writes about it TSN Los Angeles police chief Michelle Moore reported citing Twitter.

Unknown opened fire on the assembled procession. There were several attackers.

The identity of the attackers has not yet been established, it is known that they were all black.

“During the procession, shooting occurred at 103 St and Main Street. The victims are three black men and one black woman between the ages of 30 and 50. One died. The suspects in a gray Hyundai fired at the victims. We must stop this senseless violence, ”wrote City Police Chief Michel Moore. 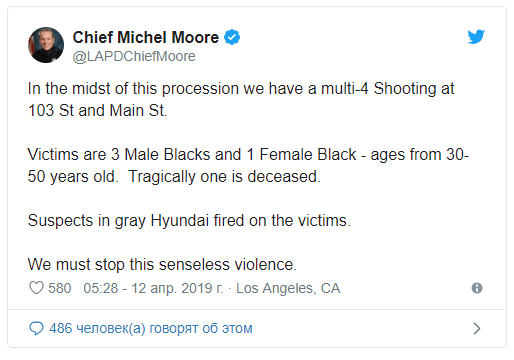 In California, the police shot a black rapper who fell asleep in a car with a gun

Decl and 6 more famous people who died of heart failure

The history of “Crystal”: why the champagne of the Russian emperor became a symbol of American rappers